Euro drops broadly today as pressured by renewed selling following weaker than expected German inflation data. That’s more than enough o offset improved unemployment rate. For now, though, Swiss Franc is the weakest one, followed by New Zealand Dollar. On the other hand, Dollar surges broadly, with the help from the decline in EUR/USD. Sterling is steadily firmer as it’s staying in consolidations.

Technically, EUR/USD’s medium term down trend resumes through 1.09 and it’s heading towards 1.0813 fibonacci level next. EUR/JPY is pressing 117.55 again. Break will bring retest of 115.86 low. USD/CHF is heading back to 0.9983 resistance. Break will be a solid sign of near term bullishness and should pave the way to 1.0237 resistance.

UK GDP contraction was finalized -0.2% qoq in Q2, matched expectations, revised. Over the year, GDP grew 1.3% yoy, down from 2.1% yoy in Q1. In the quarter, services rose 0.12%, the only positive contribution to growth, but that was the weakest quarterly figure in three years. production contracted -0.24%. Construction dropped -0.07%. Agriculture was flat.

Swiss KOF dropped to 93.2, outlook remains gloomy towards end of the year

Swiss KOF Economic Barometer dropped to 93.2 in September, down from 95.5, missed expectation of 94.5. KOF said “downward tendency that has been evident since the beginning of the year is now continuing”. Swiss economic outlook “remains gloomy towards the end of 2019.”

It added that the decline is primarily due to declining developments in the manufacturing industry. The indicator bundle for the service industry and the accommodation and food service industry slightly reinforce this decline. By contrast, private consumption, foreign demand and the construction industry remain stable relative to the previous month.

China Caixin Manufacturing PMI improved to 51.4 in September, up from 50.4 and beat expectation of 50.2. That’s also the highest reading since February 2018, signalling a recovery in the sector. Markit noted there were stronger increases in output and total new orders. However, new export business continued to decline. Staffing levels remained broadly unchanged.

Zhengsheng Zhong, Director of Macroeconomic Analysis at CEBM Group said: “The recovery in China’s manufacturing industry in September benefited mainly from the potential growth of domestic demand. The trade conflicts between China and the U.S. had a notable impact on exports, production costs and confidence of enterprises. Compared with growth in new orders, the employment situation recovered only a bit, indicating that structural issues may exist in the labor market. Central policymakers have recently been emphasizing the strong growth in the domestic market. Faster construction of infrastructure projects, better implementation of upgrading the industrial sector, and tax and fee cuts are likely to offset the influence of the subdued overseas demand and soften the downward pressure on China’s economic growth.”

Also released, the NBS PMI Manufacturing rose to 49.8 in September, up from 49.5 and beat expectation of 49.7. While there was and improvement, the sector remained in contraction for the fifth straight months. Total new orders improved and swung back to growth, indicating improving domestic demand. But new export orders dropped for the 16th month. Meanwhile factories continued to cut jobs with employment sub-index largely unchanged at 47.0.

BoJ: Not reached an impasse on monetary policy measures

Summary of opinions at September 18-19 BoJ meeting, BoJ warned that the “contrast between the manufacturing and nonmanufacturing sectors has become more evident” at home and abroad. Downside risks to the global economy “have been increasing further” mainly in Europe due to Brexit.

Also, ” it is becoming necessary to pay closer attention to the possibility that the inflation momentum will be lost”. BoJ needs to “reexamine economic and price developments” at the next monetary policy meeting (MPM).

It is also important for BoJ to “communicate with an emphasis that it has not reached an impasse on monetary policy measures”. Additionally, with regard to a negative interest policy, “its impact on the overall economy should be considered first, rather than on banks’ business conditions.”

New Zealand ANZ Business Confidence dropped to -53.5 in September, down from -52.3. That’s also the worst reading since April 2008. Agriculture scored weakest confidence at -75.6 while manufacturing was best at -46.2. Activity outlook also dropped to -1.8, down from -0.5. Activity outlook was worst in construction at -7.1, best at services at -0.6.

ANZ noted that RBNZ will be “disappointed that its unexpectedly large 50bp cut in the Official Cash Rate last month does not appear to have had much impact on business’ sentiment or investment and employment intentions.” And, “prolonged lack of confidence is starting to feed its way through the economy and is threatening the tight labour market.” Also, “this gradual but prolonged economic slowdown is at risk of ceasing to be about the data and starting to become about the people.

EUR/USD’s decline resumes after brief consolidation and reaches as low as 1.0084 so far. Intraday bias is back on the downside. Current down trend should target 1.0813 fibonacci level next. On the upside, break of 1.0958 minor resistance will turn intraday bias neutral again. But outlook will remain bearish as long as 1.1109 resistance holds. 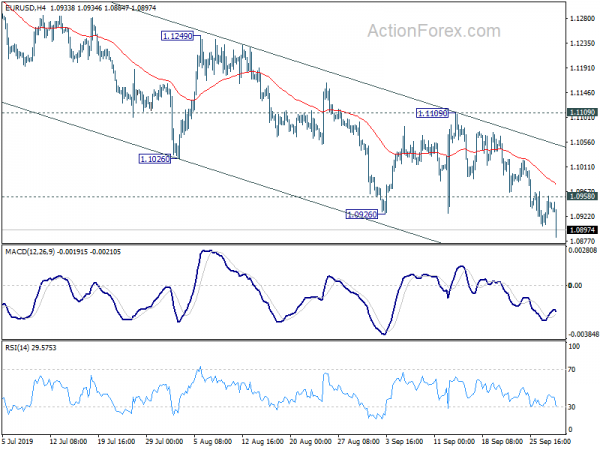 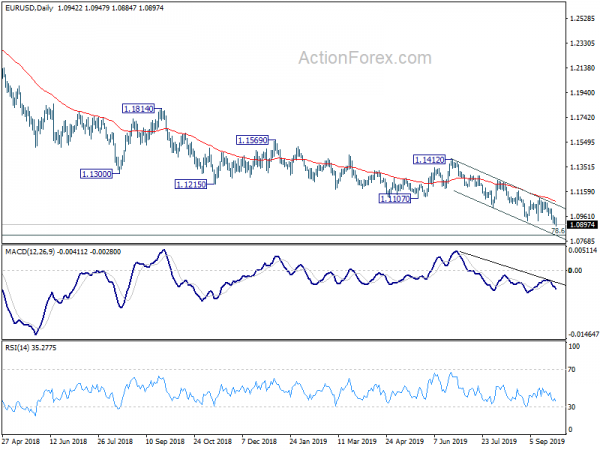