Commodity currencies are generally softer today, as led by New Zealand Dollar. Euro also turned softer despite slightly better than expected German ZEW economic sentiment. US-China trade deal appears to be in question again, but reactions are so far mild. On the other hand, Sterling appears to be slightly strong despite weaker than expected job data. UK and EU appear to be working hard on a deal before October 31 to avert no-deal Brexit. Yen is currently the second strongest.

China said to tie US farm purchases to tariff removal

Uncertainties regarding the so-called phase 1 US-China trade deal surfaced today. According to a Bloomberg, China’s purchases of US farm products wouldn’t hit the USD 40B to USD 50B level as touted by Trump under the current term. To achieve the figure, China would need to remove some of its retaliatory tariffs. And with that in mind, China would request same reciprocal action by Trump. As we noted before, the phase 1 trade deal remains highly unsure, at least until both sides have put the agreement into texts.

Earlier today, Chinese Foreign Ministry Geng Shuang confirmed that China has bought 320,000 tonnes of cotton, 230,000 tonnes of wheat and 20 million tonnes of soybeans from the U.S. However, it’s also noted by analysts that not all orders would be delivered to China this year. And there are risks that some of the orders could be cancelled if trade tension intensifies again.

In a prepared speech at a London Conference, St. Louis Fed President James Bullard warned “a sharper-than-expected slowdown could materialize in the quarters ahead.” “Trade policy uncertainty creates a disincentive for global investment. Accordingly, the global growth environment looks weaker in recent quarters,” he said, adding, “Slower global growth may feed back into slower growth in the U.S.”

And, that “may make it more difficult for the Federal Open Market Committee (FOMC) to achieve its 2% inflation target.” He added “the FOMC may choose to provide additional accommodation going forward, but decisions will be made on a meeting-by-meeting basis”.

EU chief Brexit negotiator Michel Barnier said, on arriving in Luxembourg for EU summit, that “even if an agreement (Brexit) has been difficult, more and more difficult, it’s still possible this week.” He added, “Reaching an agreement is still possible. Obviously, any agreement must work for all. The whole of the UK and the whole of the EU. Let me add also that it is high time to turn good intentions in a legal text.”

UK Brexit Minister Stephen Barclay said, “I am looking forward to … an opportunity to discuss these issues with my EU counterparts… The talks are ongoing we need to give them space to proceed. Detailed conversation are underway and a deal is still very possible.”

“The slight decrease in both the ZEW Indicator of Economic Sentiment and the situation indicator shows that financial market experts continue to expect a further deterioration of the German economy. The recent settlement in the trade dispute between the USA and China does not seem to diminish economic scepticism at this stage,” comments ZEW President Professor Achim Wambach.

BoJ also said that “domestic demand had continued on an uptrend, with a virtuous cycle from income to spending operating in both the corporate and household sectors, although exports, production, and business sentiment had been affected by the slowdown in overseas economies.”

The minutes for October RBA meeting were clearly dovish. There, the central bank cut benchmark interest rate by -25bps to new historical low of 0.75%. Most importantly, RBA said, , “the Board would continue to monitor developments, including in the labour market, and was prepared to ease monetary policy further, if needed.”

Yet, the minutes revealed detailed arguments in favor of keeping the policy rate unchanged. But in the end, these factors ” did not outweigh the case for a further easing” at the meeting. Lower rates would help “reduce spare capacity”, and provide “greater confidence” that inflation would meet target. Additionally, RBA noted “the trend to lower interest rates globally”, and the effect on the economy and inflation outcomes.

Overall, another rate cut is still likely subject to the developments in employment and inflation. But the minutes suggested that RBA is more likely to stand pat for the rest of the year, for the effect of this year’s three rate cuts to play out.

Headline CPI in China rose to 3% y/y in September, reaching PBOC’s target for first time since December 2013. However, this was driven by elevated pork price rather than improvement in household spending. Food price jumped 11.2%, accelerating from 10% in August. This was predominantly driven by pork price which soared 69.3% y/y in September. This is compared with a 46.7% increase in the prior month. Non-food CPI added only 1%, easing from 1.1% in August. Core CPI, excluding food and energy, steadied at 1.5% . PPI contracted to -1.2% y/y in September. Upstream deflation deepened as trade war continues. More in this report. 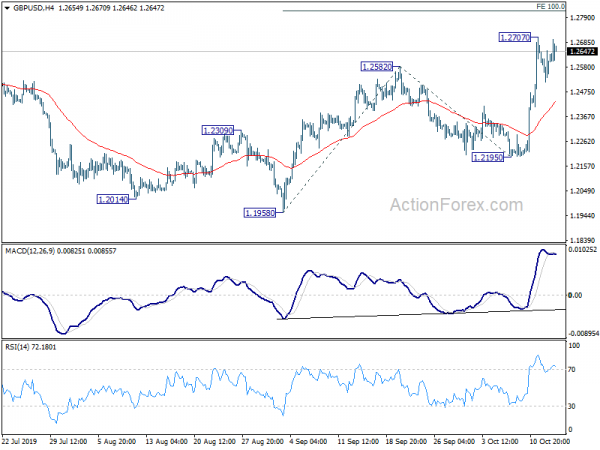 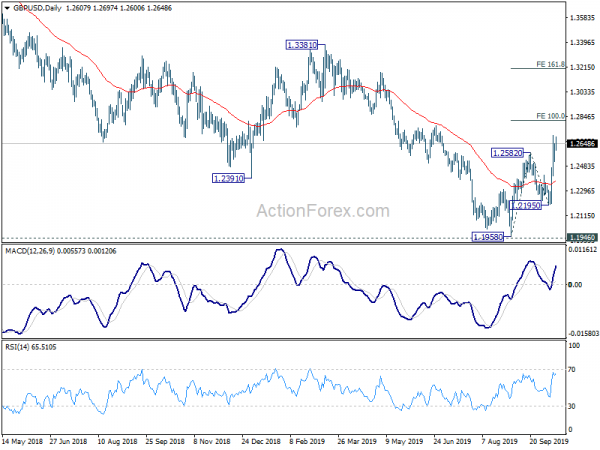