Dollar Rebounds on NFP, But Upside Capped by Unemployment Rate and Wage Growth

Dollar rebounds notably in early US session after stronger than expected non-farm payrolls report. But there is no clear follow through buying yet as wage growth missed. Also, at this point, New Zealand Dollar and Sterling are the strongest ones for today. Return of risk appetite sends Yen and Swiss Franc generally lower. US futures point to higher open and S&P 500 might extend recent record run.

Technically, EUR/USD was rejected by 1.1179 resistance but stays above 1.1062 minor support. It’s seen as staying in consolidation pattern there is no indication of bearish reversal yet. USD/CHF also recovers ahead of 0.9841 support. Further recovery will invalidate the case of head and shoulder top.

US non-farm payroll report showed 128k growth in October, above expectation of 105k. Prior month’s figure was revised sharply higher from 136k to 180k. Job growth has averaged 167k per month thus far in 2019, compared with an average monthly gain of 223k in 2018. Unemployment edged higher to 3.6%, from 3.5%, matched expectations. Participation rate was little changed at 63.3%. Average hourly earnings rose 0.2% mom in October, below expectation of 0.3% mom.

Rob Dobson, Director at IHS Markit said: “The manufacturing downturn continued at the start of the final quarter as uncertainties surrounding Brexit, the economic outlook and domestic politics all took their toll. However, the underlying picture looks even darker than even these disappointing headline numbers suggest, as output and new orders fell despite short term boosts from stock-building activity in advance of the October 31st Brexit deadline, which included a rise in exports as clients in the EU sought to mitigate supply risk.”

Australia AiG Performance of Manufacturing Index dropped -3.1 pts to 51.6 in October (seasonally adjusted), down from 54.7. The result suggests much slower growth in the sector. In trend terms, three of the six sectors are in contraction, metal products; TCF, paper & printing; building materials, woods, furniture & other. Employment index dropped -4.8 to 52.8, indicating slower expansion, but stays above long-run average of 48.9. Average wages index dropped -4.5 pts to 59.3, just above long-run average of 59.2.

Japan PMI Manufacturing was finalized at 48.4 in October, down from 48.9 in September. That’s also the lowest level in nearly three-and-a-half year. Markit noted that manufacturers were under pressure amid weaker demand. Production fell for the tenth month in a row. Also, firms reduced output charges in bid to stimulate sales.

Joe Hayes, Economist at IHS Markit, said: “Although the impact of the typhoon will have temporarily interrupted factory operations in October, panellists reported unfavourable underlying conditions across both domestic and external markets. As such, downside risks to Japan’s manufacturing economy are clearly excessive. With weak regional growth across Asia and signs of fragility within the domestic economy, it is difficult to see any respite coming in the near-term.”

China Caixin PMI Manufacturing rose to 51.7 in October, up from 51.4 and beat expectation of 51.0. Looking at some details, new orders expanded at the quickest rate since January 2013. Output growth accelerated to solid pace. Outstanding work rose further. But employment declined again.

Zhengsheng Zhong, Director of Macroeconomic Analysis at CEBM Group said: “China’s manufacturing economy continued to recover at a relatively quick pace in October. New orders placed with companies improved substantially, and new export orders rose at the fastest pace since the Sino-U.S. trade war broke out. However, business confidence has been weak. Deliveries of inputs were further delayed. Inventory activities were subdued. The employment sector continued to contract. If the improvement in demand, including that generated by infrastructure projects and exports, is able to continue, the manufacturing sector can gradually build a foundation for stability.”

EUR/USD drops notably in early US session but stays above 1.1062 minor support. Intraday bias remains neutral first and another rise is still in favor. On the upside break of 1.1179 will resume the rebound from 1.0879 to 1.1412 key resistance. However, break of 1.1062 will argue that rebound from 1.0879 has completed. Intraday bias will be turned back to the downside for retesting 1.0879. 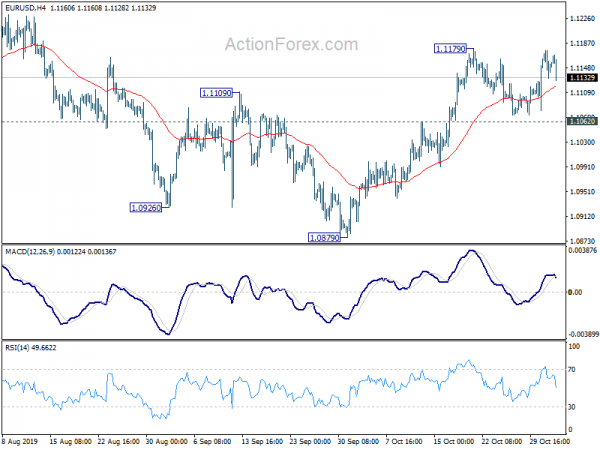 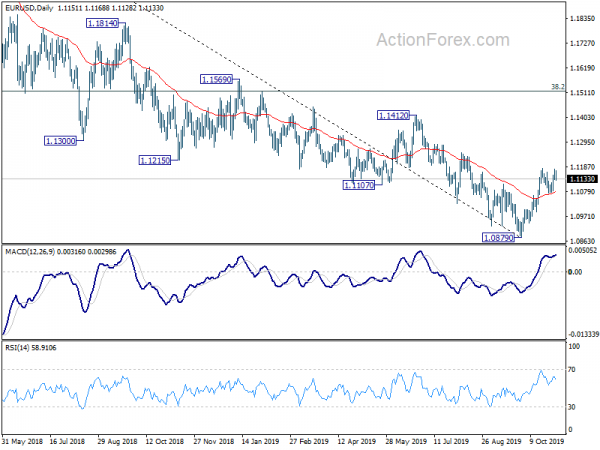