Risk appetite continues in Asian session, following record closes in US. Yen and Swiss Franc continue to be broadly pressured. Meanwhile, Australian dollar survived the balanced RBA rate statement and leads other commodity currencies higher. Dollar, Euro and Sterling are mixed, with Dollar having a slight upper hand for the moment.

Technically, though, major pairs and crosses are still stuck in consolidation pattern. While Yen crosses are generally higher, USD/JPY is held below 109.31 resistance, EUR/JPY below 121.46, GBP/JPY below 141.50. Even AUD/JPY is also held below 75.29 temporary top. Though, a break of 75.29 in AUD/JPY could indicate more broad based selloff in the Yen. Similarly, EUR/AUD is in range below 1.1179, GBP/USD below 1.3012, AUD/USD below 0.6929. There is no clear sign of breakout yet.

RBA left cash rate unchanged at 0.75% as widely expected. In the accompanying statement, it noted that rate cuts since June are supporting employment, income growth and return of inflation to target. But given global developments and domestic spare capacity, ” it is reasonable to expect that an extended period of low interest rates will be required”. The central bank also maintained it’s “prepared to ease monetary policy further if needed”.

Outlook for the Australian economy is “little changed” from three months ago. The central scenario is for the economy to growth by 2.25% in 2019 (slight downgrade from 2.5% as mentioned in August), and then gradually pick up to 3% in 2021. Unemployment rate is expected to remain at around 5.25% for some time, before gradually declining to a little below 5% in 2021.

Australia AiG Performance of Services Index rose 2.7 to 54.2 in October. Trading conditions improved for some businesses due to improved business and consumer spending. In trend terms the PSI indicated expansion in six of the eight services sectors, except business & property services, and wholesale trade. All consumer-oriented segments reported more positive conditions. Sales, new orders, employment and deliveries all rose over the month too.

BoJ Kuroda: There are various possible measures for additional easing

BoJ Governor Haruhiko Kuroda reiterated that the new forward guidance indicated “downward bias on policy rates”. However, it “does not limit additional monetary easing measures to rate cuts”. He added that “there is no change to our understanding that, besides lowering policy rates, there are various possible measures for additional easing.”

Nevertheless, Kuroda maintained his optimism regarding Japan’s economy, and expected the moderate expansion to continue on robust capital expenditure and a tight job market. He said, “although the timing of a pick-up in overseas economies has been delayed, our view is that Japan’s economy will not decelerate substantially.”

At the opening of China International Import Expo in Shanghai, Chinese President Xi Jinping reiterated the usual pledge to continue to open up China’s market. He listed a handfuls of measures taken since last year, and claimed they showed “we do honour our commitments” and “we will deliver on what we have promised”. He added that “China will throw open its arms, and provide more market opportunities, investment opportunities and growth opportunities for countries in the world, so we can share the growth together.”

Separately, it’s reported that China is pushing for more tariff reliefs by the US for phase 1 trade deal. It’s requesting US to scrap the tariffs scheduled for December 15, on round USD 156B in Chinese imports, including electronic goods and toys. Additionally, China wanted US to drop the 15% tariffs on about USD 125B goods that started on September , as well as some reliefs from earlier 25% tariffs on around USD 250B of imports from machinery and semiconductors to furniture.

However, overall expectations on the so called phase one deal are rather low. China is not expected to do anything substantive in terms of addressing any of the structural problems, including forced technology transfer. More importantly, there is no indication from China on addressing the subsidies to and privileges of state-owned enterprises in the Chinese markets.

China Caixin PMI Services dropped to 51.1 in October, down from 51.3 and missed expectation of 52.8. PMI Composite Index edged up from 51.9 to 52.0, best reading since April. Markit noted that solid rate of manufacturing output growth contrasts with only marginal rise in services activity. Composite employment falls fro the first time in three months. Outstanding business at was at the fastest expansion since March 2011.

Zhengsheng Zhong, Director of Macroeconomic Analysis at CEBM Group said: “The Caixin China Composite Output Index inched up to 52 in October from 51.9 in the month before, amid an improvement in manufacturing, but a softer service sector performance. The employment gauge dipped into contractionary territory, indicating renewed pressure on the labor market, which was likely due mainly to structural unemployment… Domestic and foreign demand both improved. However, business confidence remained weak, constraining the release of production capacity. Structural unemployment and rising raw material costs remained issues. The foundation for economic growth to stabilize still needs to be consolidated.”

AUD/USD recovers higher of 4 hour 55 EMA but stays below 0.6929 temporary top. Intraday bias remains neutral and more consolidations could be seen. In case of another fall, downside of retreat should be contained above 0.6809 support to bring another rise. Above 0.6929 will target 0.7082 key resistance. On the downside, though, break of 0.6809 support will revive bearishness and target 0.6670 low again. 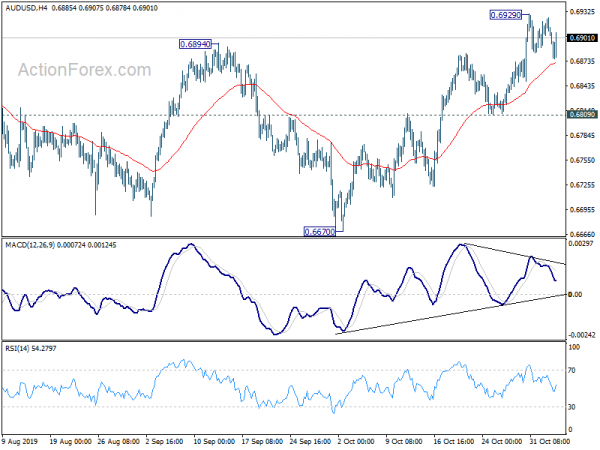 In the bigger picture, the case of medium term bullish reversal is building up with bullish convergence condition in weekly MACD. But there is no clear confirmation yet. As long as 0.7082 resistance holds, larger down trend from 0.8135 (2018 high) is still expect to continue to 0.6008 (2008 low). However, decisive break of 0.7082 will confirm medium term bottoming and bring stronger rally back to 55 month EMA (now at 0.7531). 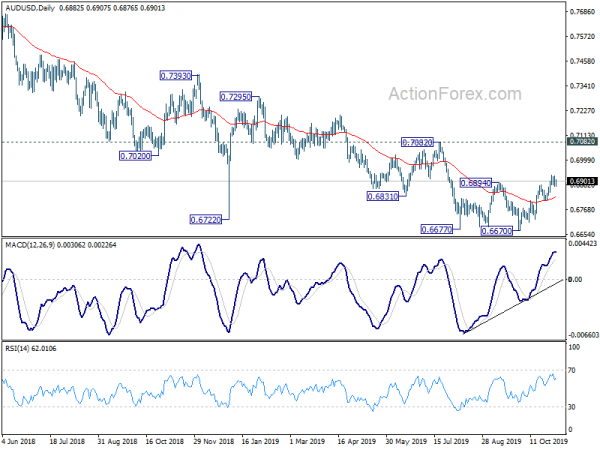