Yen strengthens broadly today as markets stabilized from recent strong risk appetite. US stocks closed mixed after extending recent record runs. Euro, Dollar and Sterling follow as the next strongest while markets continue to eye trade developments. Commodity currencies are generally lower. In particular, New Zealand Dollar is weighed down by larger than expected surge in unemployment rate. For the week, Dollar is currently the strongest, followed by Canadian, while Kiwi is the weakest followed by Euro.

Technically, EUR/USD is now pressing 1.1062 support after yesterday’s sharp fall. Decisive break there will indicate completion of rebound form 1.0879 and bring retest of this low. USD/CHF’s rebound invalidated head-and-shoulder top scenario and break 0.9970 resistance is first sign of resumption of rise from 0.9659. USD/JPY is now eye 109.28/31 resistance zone. Break will resume whole rebound from 104.45 and could prompt upside breakout in other Yen crosses.

New Zealand unemployment rate rose to 4.2%, but RBNZ will still hold next week

Despite the surge in unemployment rate, it’s still lower than the 4.4% forecast by RBNZ in the August Monetary Policy Statement. Then, there should be any change to RBNZ’s decision next week, when markets are expecting a hold. Nevertheless, the data still raises some concern over the sustainability of of impact of RBNZ’s -50bps rate cut back in August.

In the minutes of September BoJ meeting, “members shared the view that, while slowdowns in overseas economies continued to be observed and their downside risks seemed to be increasing, it was becoming necessary to pay closer attention to the possibility that the momentum toward achieving the price stability target would be lost.”

One member warned “given the concern that the delay in the recovery in overseas economies would have a negative impact on Japan’s economic activity and prices, it was necessary to consider desirable policy responses while paying attention to the side effects.”

Another member also urged that BOJ must consider “all possible policy measures without preconception, including cutting the short-term policy interest rate, lowering the target level of 10-year JGB yields, expanding asset purchases, and accelerating the expansion of the monetary base”

Also, it’s noted noted that “there was relatively large room for monetary easing among yields in the short- to medium-term zone, and lowering the short-term policy interest rate was deemed appropriate.”

According to a CBI survey, business optimism amongst SME manufacturing firms deteriorated in the three months to October, at the fastest pace since July 2016, around the time of Brexit referendum. Business sentiment dropped to -32 in the three months to October. 64% of respondents cited cited political/economic conditions abroad as likely to limit export orders – a survey record high.

Alpesh Paleja, CBI Lead Economist, said: “Activity among SME manufacturers remains listless. Firms are caught between the perfect storm of perennial Brexit uncertainty at home, and sluggish growth in the global economy. As well as hitting output, orders and hiring, these issues are depressing investment plans across the board.

“As a first step to lifting the malaise, the next government must get behind business to deliver on a Brexit deal, particularly one that unlocks a smooth transition period. Then the real heavy lifting can begin on forging a future relationship with our biggest trading partner. Ending political uncertainty will enable a renewed focus on domestic priorities, which is critical for the economy’s longer-term growth.”

Eurozone will release PMI services final and retail sales in European session. later in the day, US will release non-farm productivity and unit labor costs. Canada will release Ivey PMI.

Focus is EUR/USD is now back on 1.1062 support. Break there will suggest completion of whole rebound from 1.0879. Intraday bias will be turned back to the downside for retesting this low. On the upside, break of 1.1179 will resume the rise to 1.1412 key resistance next. 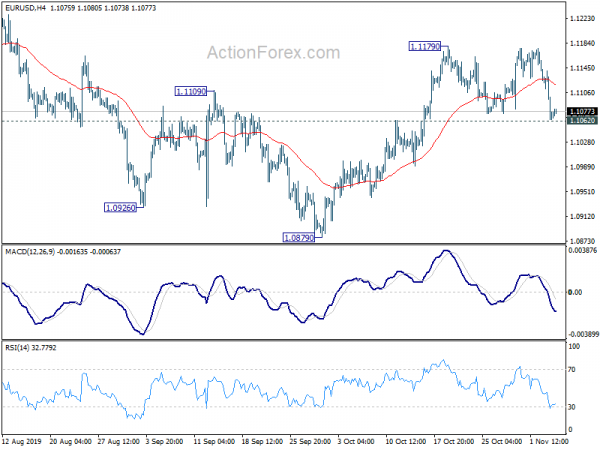 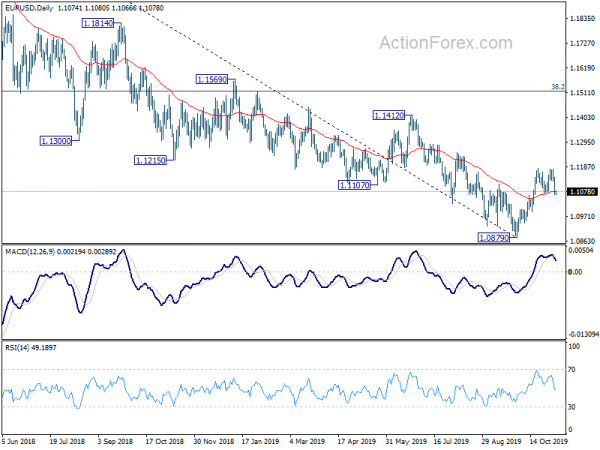