The financial markets are relatively quiet today. Global stocks are generally higher but gains are limited. Treasury yields are mixed with US benchmark 10-year yield mildly lower while Germany 10-year yield is mildly higher. Dollar is currently the strongest one for today. But the rally attempt is half-hearted. Focus will turn to US President Donald Trump’s speech on trade policy for the next move. Meanwhile, New Zealand Dollar is the weakest one as markets are now expecting an RBNZ cut tomorrow. Sterling pares back some gains after poor job data. Euro is mixed, shrugging off improvement in German economic sentiment.

Technically, EUR/USD breaches last week low and is on track to 1.0879 support. USD/CHF recovers ahead of 0.9911 minor support, and further rise is in favor to 1.0027. USD/JPY also recovers well above 108.64 minor support, maintaining near term bullishness. Other Yen crosses are staying in consolidation.

“There is growing hope that the international economic policy environment will improve in the near future, which explains the sharp rise in the ZEW Indicator of Economic Sentiment in November. In the meantime, the chances for a agreement between Great Britain and the EU and thus for a regulated withdrawal of Great Britain have noticeably increased. Punitive tariffs on car imports from the EU to the United States are also less likely than the projections a few weeks ago. An agreement in the trade conflict between the USA and China is appearing more likely too,” comments ZEW President Professor Achim Wambach.

UK total employment dropped -58k in the three months to September. That’s the biggest contraction in the job markets in four years, taking employment total down to 32.75m. Unemployment rate dropped to 3.8% in September, down from 3.9%, and beat expectation of 3.9%. Unemployment also dropped -23k ti 1.31m. The set of data suggests that more people have dropped out of the labor market and stopped looking for work.

Australia NAB Business Confidence rose from 0 to 2 in October. Business Conditions also rose from 2 to 3. NAB said “this month’s survey results continue to point to only modest outcomes in the business sector, though forward-looking indicators have improved slightly and may be pointing to a stabilisation in conditions.” Also, “acknowledging that the impact of recent rate cuts will take time to flow through the economy, it appears that the support provided by both fiscal and monetary policy this year has done little to offset the slowdown in the business sector.”

Alan Oster, NAB Group Chief Economist, also said: “The business sector has lost significant momentum over the past year or so, putting at risk the optimism around business investment and possibly employment going forward. Overall, we see this as a demand driven issue with private sector demand the weakest since the GFC. It may well be the case that the economy needs further stimulus in addition to the monetary and fiscal support provided so far to support demand and see a lift in business activity and confidence”.

The release solidify the case for another RBNZ rate cut to 0.75% tomorrow. The key now is whether RBNZ would give any indication of easing bias, even after the cut. In particular, traders would look for phrase like “there is scope for further fiscal and monetary easing if necessary.”

EUR/USD’s fall from 1.1175 is still in progress despite diminishing downside momentum. As noted before, corrective rebound from 1.0879 should have completed at 1.1175 already. Deeper decline would be seen to retest 1.0879 low. Break will resume larger down trend from 1.2555. On the upside, above 1.1043 minor resistance will turn intraday bias neutral first. But risk will stay on the downside as long as 1.1175 resistance holds. 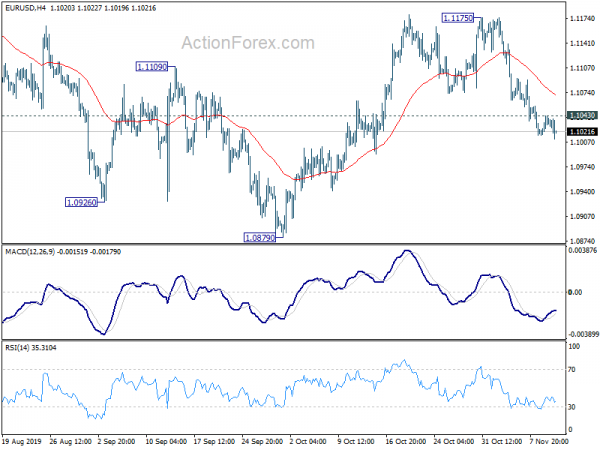 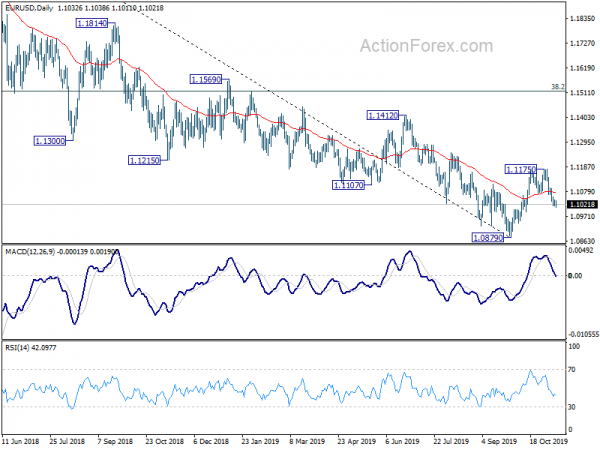