Asian stocks are broadly lower today, as lead by free fall in Hong Kong stocks. But the development is largely shrugged off by the forex markets. New Zealand dollar rebound strongly after RBNZ surprisingly stands pat today. Swiss Franc and Euro are following as second strongest. On the other hand, Canadian Dollar, US Dollar and Yen are currently the weaker ones. Dollar softened overnight after 10-year yield lost the momentum to 2% handle and closed lower.

Technically, USD/CHF’s break of 0.9911 minor support dampens our original bullish view and suggests that consolidation pattern from 1.0027 is extending with another decline. Yen crosses are staying in consolidations. In particular, price actions of EUR/JPY from 121.46 and of GBP/JPY from 141.50 are clearly corrective. We’d expect a break through respective high soon to resume recent rally.

New Zealand Dollar rebounds strongly after RBNZ surprised the markets by keeping OCR unchanged at 1.00%. There were some expectation of a cut to 0.75%. But RBNZ opted for a hold and just noted “interest rates will need to remain at low levels for a prolonged period”, and pledged to “add further monetary stimulus if needed.”

Meanwhile the two options of keeping OCR at 1% versus lowering to 0.75% were debated. “Both actions were broadly consistent with the current OCR projection”. There was a consensus to stand pat. ” The Committee noted that the risks to the economy in the near term were tilted to the downside and agreed it would add further monetary stimulus if economic developments warranted it.”

Australia Wage Price Index rose 0.5% qoq in Q3, matched expectations. The trend and seasonally adjusted indexes for Australia both rose 2.2% through the year. The ABS Chief Economist, Bruce Hockman stated “The rate of annual wage growth eased slightly in September after being stable over the past year, continuing to grow at a slightly faster rate than consumer prices over the past year. The largest contribution to wage growth over the quarter was jobs in the health care and social assistance industry.”

Westpac-MI Consumer Sentiment rose 4.5% to 97.0 in November, up from 92.8. Westpac said “This result continues to support the general view that consumers are somewhat unnerved by the announcement of low rates and media controversy around the banks’ responses.”

Trump warned of substantially higher tariffs if no deal with China

US President Donald Trump commented trade negotiation with China during a speech at the Economic Club of New York yesterday. He said “we’re close — a significant phase one deal could happen, could happen soon.” He added the usual rhetoric that China is “dying” for a deal.

Separately, Larry Kudlow, director of the National Economic Council,said it’s “possible” that tariffs with China could be adjusted as part of the trade deal. But neither side would agree to any tariff adjustments until the deal was finalized. He added, “since there’s no formal agreement we can’t say.”

Minneapolis Fed President Neel Kashkari said yesterday that he takes “comfort” from the US yield curve now. And, “the fact that the yield curve is now uninverted gives me some indication that we have taken the brakes off the economy”.

The US economic outlook is “somewhat mixed”, he added. “But a little bit more optimistic than maybe it was a couple months ago/”

Meanwhile, Kashari said that most US central banks view the current federal funds rate target of 1.50-1.75% as “modestly accommodative”.

USD/CHF’s break of 0.9911 minor support dampens our original bullish view. Consolidation from 1.0027 is extending with another falling leg. Intraday bias is back on the downside for 0.9851 support, and possibly below. On the upside, break of 0.9978 will target 1.0027 first. Break will resume whole rally from 0.9659. 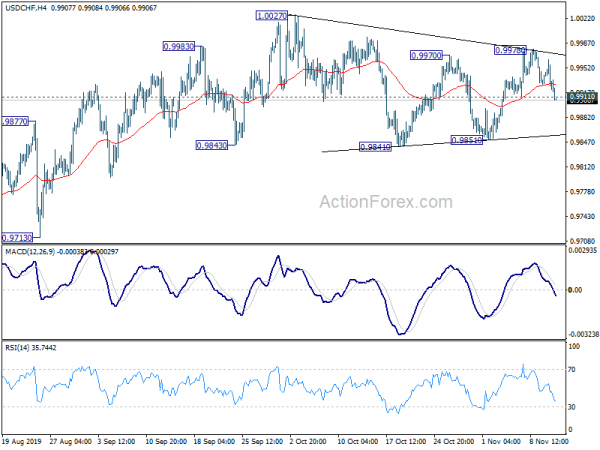 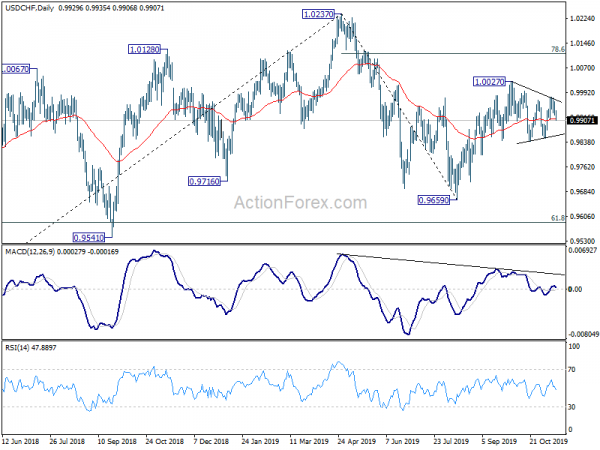