Sterling drops broadly today as poor PMIs suggest quarterly GDP contraction. Following the Pound, Swiss Franc is the second weakest for today, and then Dollar. On the other hand, commodity currencies are generally higher are sentiments recover mildly ahead of weekly close. The Loonie is also supported by slightly better than expected retial sales. For the week, Kiwi is the strongest, followed by Yen and then Dollar. Swiss Franc is the worst performer, then Aussie and Canadian.

Technically, EUR/USD’s breach of 1.1053 minor support suggests completion of recovery at 1.0989. Deeper fall is now mildly in favor to retest 1.0989. Despite the extended retreat in USD/CAD, it’s held well above 1.3190 support, and further rise remains in favor. EUR/GBP’s rebound from 0.8521 is extending higher and the case of short term bottoming is building up. Focus is back on 0.8676 resistance.

In the first speech as ECB President, Christine Lagarde urged Eurozone states to meet the common challenges with a “common response” of a “new European policy mix”. Monetary policy is the first element and ECB will “continue to support the economy and respond to future risks in line with our price stability mandate” and “continuously monitor the side effects”.

Another key element is fiscal policy which is “not just about the aggregate stance of public spending, but also its composition.”. Investment is a “particularly important part” of the responses. She added that public investment in the Eurozone remains “some way below its pre-crisis levels” and the share of “productive expenditure” also dropped. Both national policies and European programs like Invest EU has a “role to play.”

Eurozone PMI composite down 0.3 to 50.3, indicative of 0.1% quarterly GDP growth

Chris Williamson, Chief Business Economist at IHS Markit said: “The eurozone economy remained becalmed for a third successive month in November, with the lacklustre PMI indicative of GDP growing at a quarterly rate of just 0.1%, down from 0.2% in the third quarter… Business remains concerned by trade wars, Brexit and a general slowdown in demand, with heightened uncertainty about the economic and political outlook driving further risk aversion.”

Phil Smith, Principal Economist at IHS Markit said: “Beneath the subdued headline numbers the data show another slight convergence between the more domestically-focused service sector and export-led manufacturing. “While still showing a degree of resilience, the service sector is growing only modestly and at its slowest rate for over three years. By contrast, manufacturing remains firmly in contraction, but many of the indicators here are at least moving in the right direction and it would seem the worst of the downturn is over barring any shocks. A lack of employment growth remains a worry, but the survey data do at least point to support to consumer spending from low inflation and rising wages.”

Eliot Kerr, Economist at IHS Markit said: “Another solid expansion in private sector activity maintains the positive economic picture seen in France over the past few months. Moreover, another increase in new orders and a faster rise in backlogs of work points to strong underlying demand and further growth ahead.”

Chris Williamson, Chief Business Economist at IHS Markit, said: “With an upcoming general election adding to Brexit-related uncertainty about the outlook, it’s no surprise to see UK businesses reporting falling output and orders in November. The decline signalled by the flash PMI follows stagnation in October and adds to what has been the survey’s worst spell since the recession of 2008-9. “The weak survey data puts the economy on course for a 0.2% drop in GDP in the fourth quarter, and also pushes the PMI further into territory that would normally be associated with the Bank of England adding more stimulus to the economy.”

Joe Hayes, Economists at IHS Markit, noted: October PMI data was difficult to interpret as a result of the temporary negative shocks by the sales tax and typhoon. However, we can deduce from the November PMI data that there is a strong possibility of Japan’s economy contracting in the fourth quarter. We have seen little rebound following these temporary factors, especially in the service sector where the impact of the tax rise and poor weather was most prominent:.

Japan CPI core edged up to 0.4%, well below BoJ’s target

The inflation subdued inflation reading suggests that the sales tax hike in the month had little impact on prices, and is unlikely o derail consumer spending. Yet the core inflation reading remains well below BoJ’s 2% target. The central will need to maintain ultra-loose monetary policy for a prolonged period. But even so, there is little evidence to show that inflation could sustainably hit the target with current stimulus.

Commenting on the Commonwealth Bank Flash PMI data, CBA Chief Economist, Michael Blythe said: “Activity in the key manufacturing and services sectors continues to bounce around the 50 line that separates expansion from contraction. This is a particularly disappointing result when benchmarked against interest rate cuts, tax cuts, rising house prices and a still solid labour market”.

“Readings on new orders and employment offer a glimmer of positive news. But the challenges faced by Australian businesses are evident in the accelerating growth in input prices and the slowing trend in output prices. Competitive pressures and weak demand are taking a toll”.

GBP/USD’s decline suggests that consolidation from 1.3012 is extending with the third falling leg. Downside should be contained by 1.2768 support to bring rise resumption. On the upside, break of 1.3012 will resume whole rally from 1.1958. However, break of 1.2768 will bring deeper fall back to 1.2582 resistance turned support. 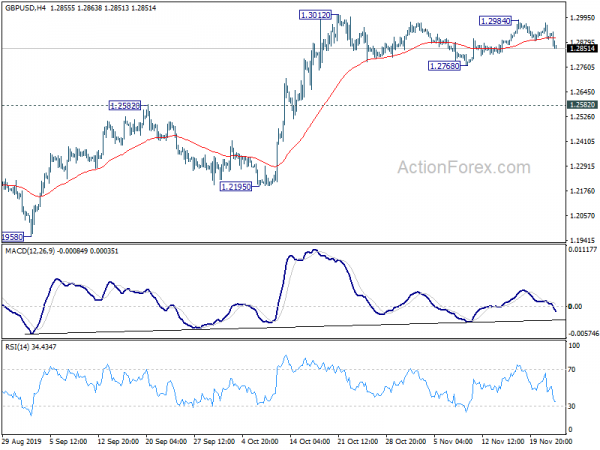 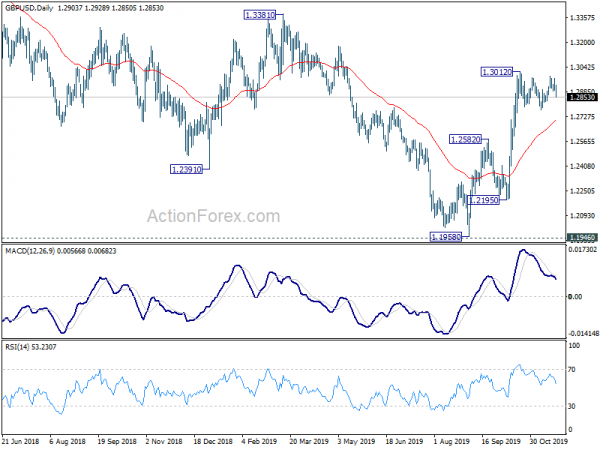