Trade optimism pushed US stocks to new record highs overnight but markets are just mixed in Asia. While US and China held another trade phone calls, there is no clear sign of any breakthrough. In the currency markets, New Zealand Dollar is the strongest one today so far, lifted by much better than expected retail sales data. Australian Dollar recovers mildly, but it’s indeed one of the weakest for the week at this point. Canadian Dollar is the worst performing, followed by Yen.

technically, AUD/USD’s breach of 0.6769 suggests resumption of decline from 0.6929. Further fall is now in favor to retest 0.6670 low. Euro looks vulnerable against Dollar, Yen and even Aussie. EUR/USD is eyeing 1.0989 support and break will resume the fall from 1.1175 to retest 1.0879 low. EUR/GBP is now close to 0.8521 temporary low. Break will resume recent decline from 0.9324 to 0.8472 key support. Further rise remains mildly in favor in EUR/AUD as long as 1.6202 minor support holds. But break will indicate completion of rebound from 1.5976, and turn bias to the downside for this support again.

A phone call was held between US and China top trade negotiators this morning. Accord to statement of China’s Ministry of Commerce: “Both sides discussed resolving core issues of common concern, reached consensus on how to resolve related problems and agreed to stay in contact over remaining issues for a phase one agreement”.

Yet, after another phone calls, there is no concrete news regarding the phase one trade deal. It’s reported that farm purchases and tariff rollbacks are currently the two sticky issues. It looks like officials from both sides are still targeting to complete the phase one by the end of the year. But negotiations could eventually drag on to next year.

Fed Chair Jerome Powell said in a speech yesterday that “monetary policy is now well positioned to support a strong labor market and return inflation decisively to our symmetric 2 percent objective.” He added that “if the outlook changes materially, policy will change as well.” The comments reaffirmed the case that Fed has done with mid-cycle adjustment. The default position is to hold interest rates unchanged at current level.

On the economy, he said the as the economy continued its record 11th year of expansion, the benefits are now reaching many communities, and there is plenty of room to build on the impressive gains achieved so far. Also, “outlook for further progress is good: Forecasters are generally predicting continued growth, a strong job market, and inflation near 2 percent.”

US House appeared to have moved closer to ratifying the US-Mexico-Canada trade agreement. House speaker Nancy Pelosi said yesterday, “we are within range of a substantially improved agreement for America’s workers”. And, “now, we need to see our progress in writing from the Trade Representative for final review.”

She criticized that the original version of USMCA crafted last year “still left American workers exposed to losing their jobs to Mexico, included unacceptable provisions to lock in high prescription drug prices, and fell short of key environmental standards.” She contended it also lacked “concrete, effective enforcement mechanisms.” Months were spent in the negotiations between Democrats and the administration on fine tuning the details. President Donald Trump and Republicans are pushing for a vote to ratify the deal by the end of the year.

Mexican President Andres Manuel Lopez Obrador also stepped up the pressure on US and planed to send another letter to Pelosi this week urging Congress to approve the USMCA. Jesus Seade, Deputy Foreign Minister for North America, however, sounded pessimistic as he noted, “far from reaching a deal, in the last two weeks, statements from certain labor sectors have re-emerged, floating ideas that would be totally unacceptable to Mexico.”

RBA Deputy Governor Guy Debelle said in a speech the increase in labor supply in Australia has meant that “the strong employment outcomes in recent years has not generated the pick-up in wages growth that might otherwise have occurred”. He expected “wages growth to remain largely unchanged at its current level over the next couple of years.”

He noted that “dynamics of participation and unemployment flows will have an important bearing on wages growth as well as household income growth”. Also, “the more wages growth is entrenched in the 2’s [2-3 per cent range], the more likely it is that a sustained period of labour market tightness will be necessary to move away from that.”

RBA has so far failed to push unemployment down to the 4.5% level, which should generate sustainable wages growth and inflation. Markets are expecting more policy easing from the central bank next year, including possibility of QE.

AUD/USD’s breach of 0.6769 temporary low suggests resumption of fall from 0.6929. Intraday bias is now turned back to the downside for retesting 0.6670 low. On the upside, above 0.6803 minor resistance will turn intraday bias neutral first. But as we see that corrective rise from 0.6670 has completed at 0.6929, any recovery should be limited well below 0.6929 resistance. 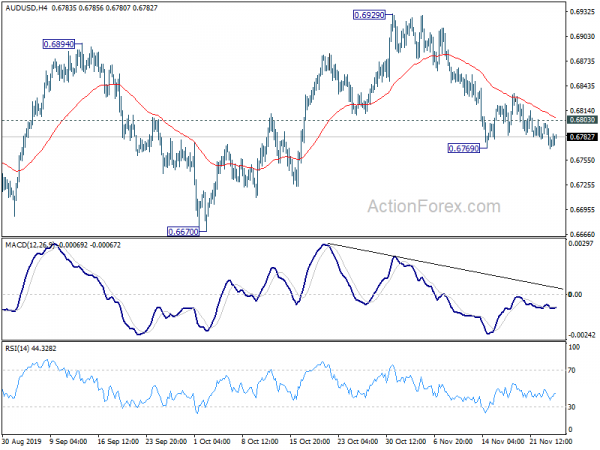 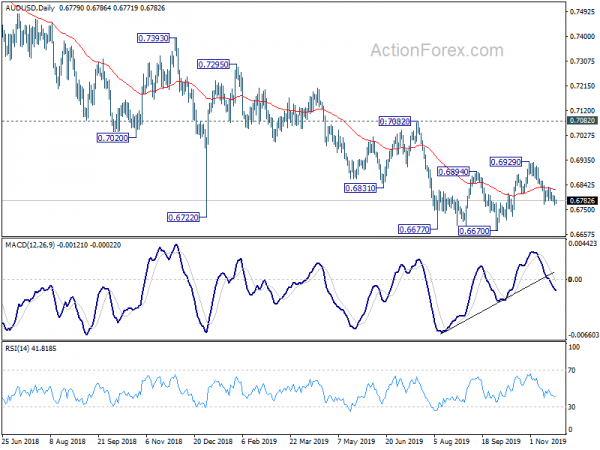