Dollar Firms Up Mildly as Brief Consolidation Might Be Finished

Dollar firms up mildly in Asian session as this week’s brief consolidation seems to be completed. Stocks were given another lift by trade hope overnight, with major indices extending record runs. Optimism somewhat continues in Asia but investors there seem to be relatively unconvinced. Kiwi is currently the second strongest, then Yen. On the other hand, Australian Dollar is the weakest one, followed by Euro, and then Sterling.

Technically, there is no change in overall outlook. Dollar remains in favor to extend recent rise against Euro, Swiss and Aussie. Break of 1.0989 support in EUR/USD will resume the fall from 1.1175 to 1.0879 low. AUD/USD’s decline from 0.6929 is in progress for 0.6670 low. USD/JPY, EUR/JPY and GBP/JPY are staying in range trading, with further rally mildly in favor.

Trump: We’re in the final throes of trade deal with China

US President Donald Trump said yesterday, “we’re in the final throes of a very important deal”. He hailed again that it’s “one of the most important deals in trade ever” and “it’s going very well. But, “at the same time we want to see it go well in Hong Kong”. He added, “I think that President Xi can make that happen. I know him and I know he’d like to make it happen”, without elaboration.

For now, it’s unsure when Trump will sign the Hong Kong Human Rights and Democracy Act. The bill was for backing Hongkonger’s defense of its autonomy, and was passed by both Senate and House last week nearly unanimously. China has warned by retaliation if Trump signs it into law.

Separately, White House adviser Kellyanne Conway said US and China were “getting really close” on the phase one trade deal. And the US will “continue to negotiate”. She added, “those forced tech transfers, the theft of intellectual property, the trade imbalance of a half a trillion a year with the world’s second largest economy, China – this makes no sense to people.”

BoJ Sakurai: Increasing need to be mindful of side-effect of low-rate policy

BoJ board member Makoto Sakurai, warned in a speech, “in guiding monetary policy, there’s an increasing need to be mindful of the side-effect of continuing our low-rate policy such as that on Japan’s banking system.”

“If there’s a crisis that could disrupt Japan’s financial system,” he noted, “a bold policy response is necessary”. However, “if the overseas slowdown driven by trade woes is moderate, and the speed at which it affects Japan’s economy is slow, we have room to scrutinise economic indicators in deciding on policy”.

He added, “the next half-year is when we need to carefully scrutinise economic developments”, including the impact of sales tax hike and global slowdown.

Exports to China rose NZD 279m to NZD 1.5B, led by rises in milk powder, lamb and beef. Exports to Australia was little changed at NZD 791m. Imports from China dropped NZD -100m to NZD 1.4B. Imports from EU dropped slightly by NZD-9.9m to NZD 965m.

From Australia, construction work done dropped -0.4% in Q3, better than expectation of -1.0%.

Germany import price and Swiss ZEW will be feature in European session. But main focuses will be from the US GDP revision, jobless claims, PCE inflation, durable goods orders, pending home sales and Fed’s Beige Book report will be featured.

With 0.6803 minor resistance intact, intraday bias in AUD/USD stays mildly on the downside. As noted before, corrective rebound from 0.6670 should have completed at 0.6929. Fall from there is now in progress for retesting 0.6670 low first. On the upside, above will turn intraday bias neutral and bring recovery. But upside should be limited well below 0.6929 resistance. 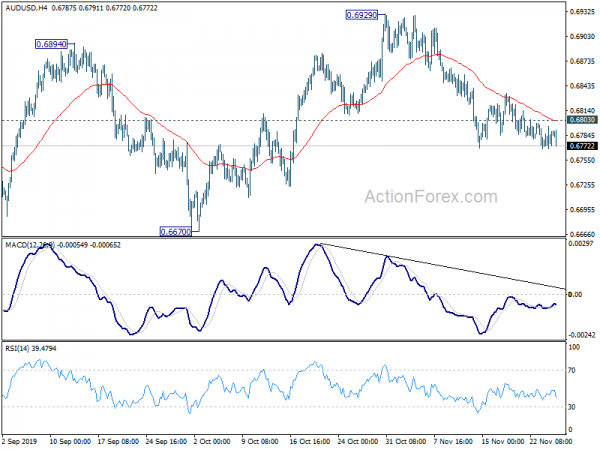 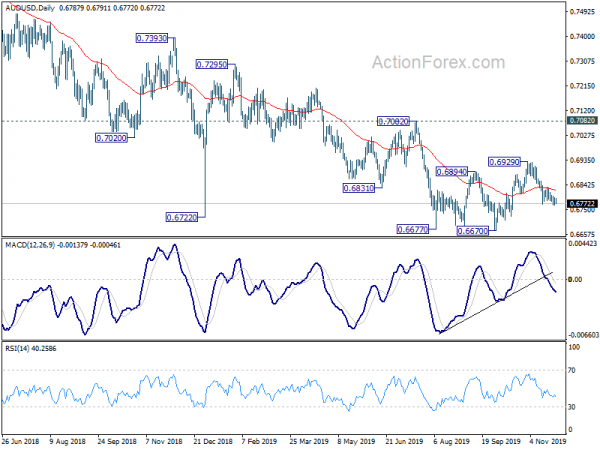