Market sentiments are generally weighed down by renewed trade concerns after US President Donald Trump’s decision to restore steel and aluminum tariffs on Brazil and Argentina. Additionally, China formally started some form of retaliation against US on its support on Hong Kong’s democracy movement. Dollar is trading broadly lower except versus Canadian. Meanwhile, Swiss Franc appears to be strengthening, after Australian and New Zealand Dollar.

Technically, USD/CAD’s decline today suggests rejection by 1.0027 key near term resistance. Deeper fall could be seen back towards 0.9868 support as range trading extends. USD/JPY and EUR/JPY retreats mildly but there is no sign of bearish reversal yet. 0.6795 minor resistance in AUD/USD will now be a focus in US session. Break will at least bring stronger rebound towards 0.6834 resistance. That could be a prelude to more Dollar pull back elsewhere.

In a series of tweets, Trump complained that “Brazil and Argentina have been presiding over a massive devaluation of their currencies, which is not good for our farmers.” Therefore, “effective immediately, I will restore the Tariffs on all Steel & Aluminum that is shipped into the U.S. from those countries.”

He also defended that US markets are “up as much as 21%” since tariffs were announced in 2018. And US is “taking in massive amounts of money (and giving some to our farmers, who have been targeted by China)!

Bedsides, he urged Fed to “act so that countries, of which there are many, no longer take advantage of our strong dollar by further devaluing their currencies.. And Fed should “Lower Rates & Loosen”.

China announced retaliations against US on HKHRDA

China’s Foreign Ministry announced today retaliations against US passage of the Hong Kong Human Rights Democracy Act. US military ships and aircrafts are banned from visiting Hong Kong. Also, sanctions are imposed against several US NGO, including the National Endowment for Democracy, the National Democratic Institute for International Affairs, the International Republican Institute, Human Rights Watch, and Freedom House.

Spokeswoman Hua Chunying said “we urge the U.S. to correct the mistakes and stop interfering in our internal affairs. China will take further steps if necessary to uphold Hong Kong’s stability and prosperity and China’s sovereignty”. She added that the NGOs “shoulder some responsibility for the chaos in Hong Kong and they should be sanctioned and pay the price.”

Separately, Axios reported on Sunday that trade negotiations between US and China “stalled” before of the “Hong Kong legislation”, referring to the HKHRDA.

China Caixin Manufacturing PMI rose slightly to 51.8 in November, up from 51.7 and beat expectation of 51.4. Markit noted there were solid increases in output and new business. Employment was broadly stable while inflationary pressures remained weak.

Zhengsheng Zhong, Director of Macroeconomic Analysis at CEBM Group said: “Currently, manufacturing investment may be lingering near a recent bottom. A low inventory level has lasted for a long time. If trade negotiations between China and the U.S. can progress in the next phase and business confidence can be repaired effectively, manufacturing production and investment is likely to see a solid improvement.”

UK PMI Manufacturing was finalized at 48.9 in November, revised up from 48.3, down from October’s 49.6. Markit noted that output, new orders and employment all declined. Stocks depleted and purchasing reduced following Brexit delay.

Rob Dobson, Director at IHS Markit: “Signs of a two-speed economy persisted, with intensifying business uncertainty leading to a further steep drop in demand for machinery and equipment as firms cut back on investment, but rising demand for consumer goods suggests that households continue to provide some support to the economy. “Manufacturers across all sectors will be hoping that the New Year brings clarity on the political, trade and economic fronts, providing a more certain foundation to plan and rebuild as the next decade begins.”

Eurozone PMI Manufacturing finalized at 46.9, still a major drag on the economy

Eurozone PMI Manufacturing is finalized at 46.9 in November, up from October’s 45.9. Markit noted milder falls in new orders and output recorded during the month. But job losses sustained despite improve in confidence. Looking at the member states, Germany PMI Manufacturing improved to 5-month high of 44.1, but stayed well below 50 no-change mark. The Netherlands dropped to 49.6, a 77-month low. Only Greece and France were above 50.

Chris Williamson, Chief Business Economist at IHS Markit said: “A further steep drop in manufacturing output in November means the goods-producing sector is likely to have acted as a major drag on the eurozone economy again in the closing quarter of 2019. The survey data for the fourth quarter so far are indicating a quarterly rate of contraction in excess of 1% for manufacturing.

Joe Hayes, Economist at IHS Markit, said Japan’s manufacturing sector “remains firmly stuck in contraction”. In particular, “export orders dropped at the fastest rate since mid-year amid reports of demand weakness at key trade destinations, namely China.” Also, signs of how deeply-rooted this manufacturing downturn in Japan has become were seen in other survey data.

Economic data released from Australia are generally disappointing. AiG Performance Index dropped to 48.1 in November, down from 51.6. That’s also the lowest level since August 2016, and indicates contraction in the sector. AiG said: “. The faster rate of contraction of the new orders index in November suggests a weak Christmas period ahead for Australian manufacturers. However, some manufacturing sectors are reporting better conditions than others, with manufacturers in the large food and beverage sector continuing to report buoyant conditions.”

In its Monthly Economic Indicators report, New Zealand Treasury Department noted that November data were “fair mixed” with some pointing to “further slowing in GDP growth”. Others indicated growth may be “levelling out”. On balance, “weaker-than-forecast investment and services exports are likely to see overall New Zealand GDP growth fall below Budget forecasts”

USD/CHF’s sharp decline and break of 0.9980 minor support suggests rejection by 1.0027 resistance. Consolidation from is possibly starting another down leg. Intraday bias is turned back to the upside for 0.9868 support, and possibly below. On the upside, though, decisive break of 1.0027 will confirm resumption of larger rally from 0.9659. 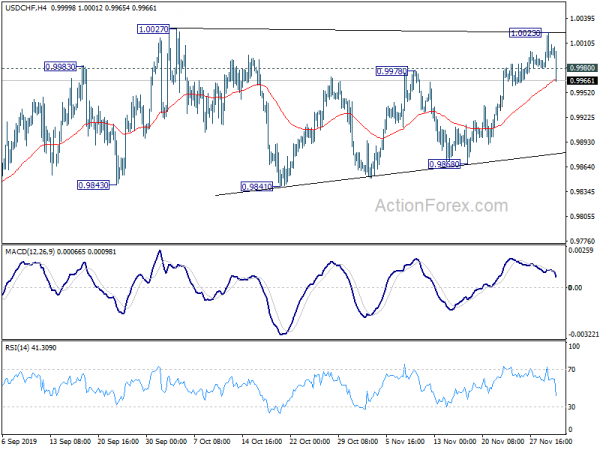 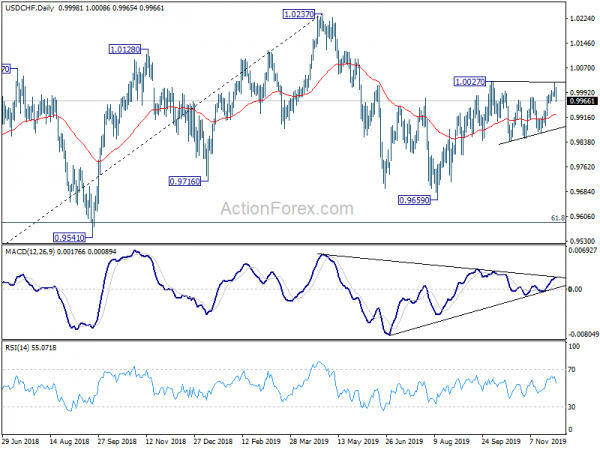