US stocks futures and Dollar tumble broadly today after US President Trump indicated that he has no deadline for China trade deal, and could even wait until after 2020 election to make it. If the phase one deal is dragged on, through December 15 “natural deadline”, new round of tariffs could be imposed. If that happens, it’s a massive difference to the tariff rollback that some investors had been expecting.

In the currency market, though, Dollar is just the third weakest for today for now, after Canadian and Euro. On the other hand, Sterling is the strongest one, followed by Swiss Franc. Technically, GBP/USD is set to taken on 1.3012 near term resistance. Break will resume recent rise from 1.1958 to 1.3381 key structural resistance next. EUR/CHF’s break of 1.0967 minor support suggests near term reversal. Deeper fall could now be seen back to 1.0811/63 support zone.

Trump has no deadline for China trade deal, could wait until after election

Trump reporters in London that “I have no deadline” regarding the phase one trade agreement with China. “I like the idea of waiting until after the election for the China deal,” he added. “But they want to make a deal now and we’ll see whether not the deal is going to be right. It’s got to be right.” Trump further said that “the China trade deal is dependent on one thing: Do I want to make it? Because we’re doing very well with China right now and we could do even better with the flick of a pen.”

In response to the threat of new tariffs by US, French Finance Minister Bruno Le Maire criticized the proposals as “unacceptable”. He warned that EU would be “ready to riposte” to the tariffs. Junior Economy Minister Agnes Pannier-Runacher also said France would be “pugnacious” in its dealings with US. And,

Late Monday, US Trade Representative said it’s considering to impose punitive tariffs of up to 100% on USD 2.4B of French champagne, handbags, cheese and other products, as response to the country’s new international digital services tax. USTR said such tax was “inconsistent with prevailing principles of international tax policy”.

Eurozone PPI rose 0.1% mom, down -1.9% yoy in October, versus expectation of 0.0% mom, -1.9% yoy. On monthly comparison, Eurozone PPI rose by 0.7% mom in the energy sector, by 0.3% mom for non-durable consumer goods and by 0.1% mom for both capital goods and durable consumer goods, while they fell by -0.3% mom for intermediate goods. Prices in total industry excluding energy fell by -0.1% mom.

UK PMI Construction improved to 45.3 in November, up from 44.2 and beat expectation of 44.5. Markit said that output fell in all three broad categories of construction. There was sharp drop in new work. Also, staffing levels decreased for the eighth month in a row.

Tim Moore, Economics Associate Director at IHS Markit, said: “UK construction output fell again in November as Brexit uncertainty and the forthcoming General Election continued to send a chill breeze across the sector. The speed of the downturn in construction work eased a little since October, but the survey continues to signal a notable drop-off in business conditions compared with the first half of 2019.”

RBA kept cash rate unchanged at 0.75% as expected, prepared to ease if needed

RBA kept cash rate unchanged at 0.75% as widely expected. It noted in the statement that given “the long and variable lags in the transmission of monetary policy”, the central bank was on hold to monitor developments, “including in the labour market”. Though, it reiterated that due to both global and domestic factors, ” it was reasonable to expect that an extended period of low interest rates will be required”. RBA is also “prepared to ease monetary policy further” if needed.

Also from Australia, current account surplus widened to AUD 7.9B in Q3, above expectation of AUD 6.3B.

Focus is immediately on 1.3012 resistance in GBP/USD with today’s strong rise. Decisive break there will confirm resumption of whole rise from 1.1958. Further rise should be seen to 1.3381 resistance next. For now, near term outlook will remain bullish as long as 1.2827 support holds, in case of retreat. 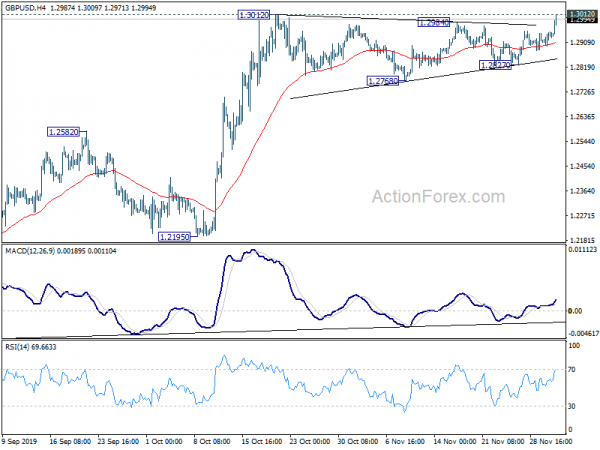 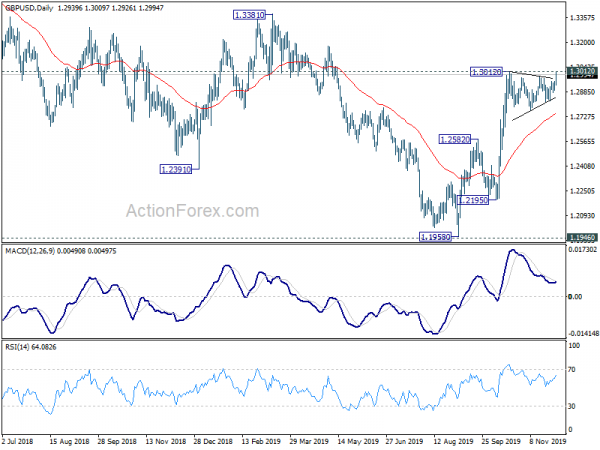