Sterling’s pull back extends deeper today on renewed Brexit concern. Setting a hard deadline of December 2020 for trade negotiations UK and EU could create another Brexit cliff-edge. Meanwhile, Australian and New Zealand Dollars follow the Pound as next weakest, partly weighed down by risk aversion. On the other hand, Swiss Franc and Euro are currently the strongest, helped by rebound in respective Sterling crosses. Dollar is mixed for the moment, together with Yen.

Technically, while the pull back in Pound is deep, key near term levels are intact for now. Those are, 1.3050 support in GBP/USD, 142.47 support in GBP/JPY and 0.8508 resistance in EUR/GBP. We’d still expect these levels to hold to bring another rise in Sterling sooner or later. Though, EUR/GBP is looking most vulnerable for now. USD/CHF breaches 0.9805 temporary low and could be resuming fall from 1.0023.

EU Weyand: Failing to reach a trade agreement with UK by 2020 would lead to another cliff-edge situation

EU trade director-general Sabine Weyand acknowledged that “UK does not intend to go for an extension of the transition” and EU needs to be prepared for that. She added, “that means in the negotiations we have to look at those issues where failing to reach an agreement by 2020 would lead to another cliff-edge situation.”

Weyand also said EU is ready to start negotiations very quickly after UK leaves EU at the end of January. European Commission is due today afternoon to brief EU27 countries on its work program for the negotiations.

ECB Governing Council member Peter Kazimir urged further structural change in the bloc. He warned, “I am worried that we won’t be able to enjoy significant economic growth before we deal with the fact that EU is lagging behind in technology and before we complete the European Monetary Union.”

Another Governing Council member Madis Müller said the upcoming policy review should consider whether the control over inflation has diminished. And, “maybe in this case we would not need to be as aggressive with our policies. We could be more flexible and not chase that goal at any price.”

Minutes of December RBA meeting suggest that the central bank is still on track to further easing next year, probably in February. Employment and wages growth would remain the main reason for doing so. It’s noted that “current rate of wages growth was not consistent with inflation being sustainably within the target range”. Also, “nor was it consistent with consumption growth returning to trend”. Furthermore, private sector wages growth has indeed “levelled out in recent quarters, following its gentle upward trend of the previous couple of years”.”

ANZ said: “New Zealand businesses are rolling into the end of the year in much better heart than was looking likely just a few months ago, particularly manufacturers. Challenges remain, and time will tell how sustainable the lift in sentiment and activity proves to be, with headwinds for the economy still present and global risks not having gone away, for all that some geopolitical risks are now less prominent. But for now, surprisingly strong commodity prices and low interest rates are working their magic, and 2019 is ending on a much better note than it began.”

USD/CHF’s breach of 0.9805 temporary low suggests resumption of fall from 1.0023. Intraday bias is turned back to the downside for retesting 0.9659 low. However, considering bullish convergence condition in 4 hour MACD, break of 0.9876 will indicate short term bottoming. In such case, intraday bias will be turned back to the upside for 55 day EMA (now at 0.9900) and above. 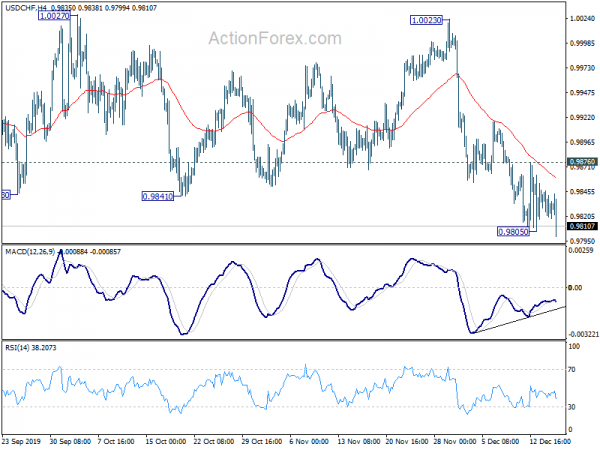 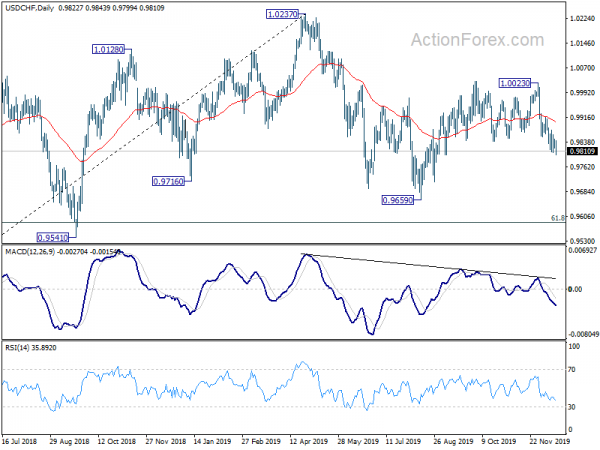