Sentiments continue to be relatively stable in Asian session today. Hong Kong stocks are back from holiday and tumble sharply. But Nikkei and Singapore Strait times are having mild recovery. Gold is back below 1570 level and WTI crude oil is back at 54. In the currency markets, Australian Dollar is limited slightly by CPI data. Yen and Dollar are also currently firm. New Zealand Dollar, on the other hand, is the weakest, followed by Swiss Franc. Ongoing development of the coronavirus outbreak in China will remain the most important factor to watch. Fed’s rate decision could take a back seat.

China’s National Health Commission reported today that, as of end of Tuesday, the number of confirmed coronavirus cases in China surged to 5974, up from 4515 a day ago. The number also surpassed the 5327 cases in of SARS in the country 17 years ago. Death toll rose from 106 to 132. Globally, number of confirmed case now stands at 6058.

In the Summary of Opinions of BoJ’s January 20/21 meeting, it’s noted that there has been “no further increase in the possibility that the momentum toward achieving the price stability target will be lost.”. Therefore, it’s “appropriate” to keep monetary policy unchanged. Nevertheless, the possibility of inflation losing momentum continues to “warrant attention”. It’s “appropriate” to tilt toward monetary accommodation.

Also, Japan is just “only halfway toward moving out of the so-called Japanification” of secular stagnation where low growth, low inflation, and low interest rates last for a long period. Risk of deflation continues to “warrant attention”. Downside risks to economic activity and prices are “still significant”. It’s necessary to be prepared for possible economic downturn as one of the risk scenarios.

ABS Chief Economist, Bruce Hockman said: “Drought conditions are impacting prices for a range of food products. Food prices increased 1.3 per cent this quarter with price rises for beef and veal (+2.9 per cent), pork (+4.7 per cent), milk (+1.7 per cent) and cheese (+2.4 per cent). Both the impact from the drought and lower seasonal supply contributed to price rises for fruit (+6.8 per cent) this quarter.”

“Annual inflation remains subdued partly due to some price falls for housing related expenses. Through the year to the December 2019 quarter, price falls were recorded for utilities (-1.0 per cent) and new dwelling purchase by owner-occupiers (-0.1 per cent), while rent price rises remained modest (+0.2 per cent),” said Hockman.

FOMC rate decision is a major focus today. Fed is widely expected to keep interest rate unchanged at 1.50-1.75%. The accompanying statement will, at most, contain only minor changes from December’s. There will be no update on economic projections and median dot plot at the meeting. Fed Chair Jerome Powell would reiterate that monetary policy is at the right place. Overall, the decision and press conference is more likely a non-event than not.

A temporary low is formed at 0.6737 in AUD/USD and intraday bias is turned neutral first. Some consolidations would be seen but upside should be limited by 0.6849 support turned resistance to bring another decline. Corrective rebound from 0.6670 has completed with three waves up to 0.7031. Break of 0.6737 will pave the way to retest 0.6670 low. However, firm break of 0.6849 will dampen our bearish view and turn focus back to 0.7031 instead. 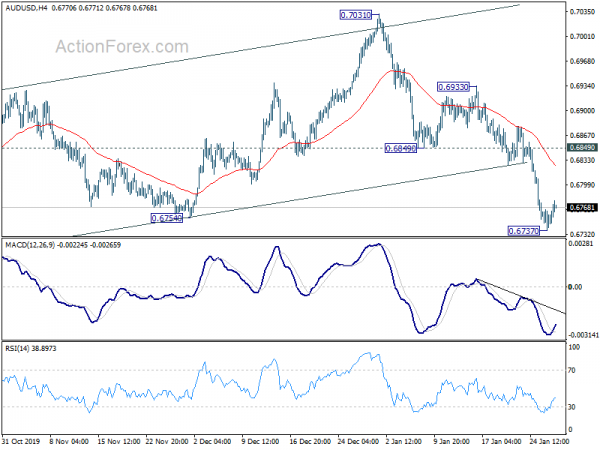 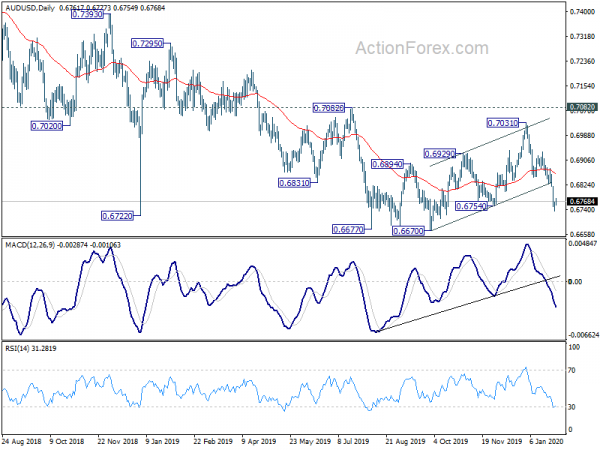