Risk appetite stays strong in the global markets, with European indices registering solid gains. US futures also point higher open for extending recent record runs. Yen is under some selling pressure today, together with Dollar and Euro. On the other hand, commodity currencies are generally higher, with Kiwi being supported by hawkish RBNZ hold.

In the latest monthly report published today, OPEC sharply lower 2020 global oil demand growth to 0.99m barrels per day, down -0.23m bpd from the estimate released a month ago.

The report warned, “the impact of the Coronavirus outbreak on China’s economy has added to the uncertainties surrounding global economic growth in 2020, and by extension global oil demand growth in 2020.”

And, “clearly, the ongoing developments in China require continuous monitoring and assessment to gauge the implications on the oil market in 2020.”

S&P Global estimated that China’s coronavirus outbreak could drag Eurozone and UK growth by -0.1% to -0.2% this year. The impact will likely be felt mostly in Q1 though. It noted, “a large share of economic activity hindered by the outbreak of the virus, especially goods production, would just be postponed rather than canceled altogether.” However, “if a catch-up effect materializes, the economic outlook for 2021 could even be slightly higher than our current baseline forecast of 1.2%.”

The agency’s US chief economist also warned that “most of the drag on U.S. growth to be in the first quarter, with a smaller hit in the second quarter and a rebound in the latter half.” And, “along with the potentially devastating human toll, if the virus spreads further and lasts longer, the impact on virtually every economy could be far worse,.” US GDP growth in Q1 could be dragged to just 1% annualized, from previous forecasts of 2.2%.

RBNZ left the Official Cash Rate unchanged at 1.00% as widely expected. In the accompanying statement, its noted “soft momentum” has continued in 2020″. But “growth is expected to accelerate over the second half of 2020 driven by monetary and fiscal stimulus, and the high terms of trade.” Impact of outbreak of China’s coronavirus will be “of a short duration” only.

The statement is seen as slightly more hawkish than November’s. Employment is seen by RBNZ as “at or slightly above its maximum sustainable level”, somewhat upgraded from “around” the level. Consumer inflation is “close to” the 2% mid-point of target range too. While low interest remain necessary, the overall statement suggests that RBNZ is more likely to be on hold for the rest of the year than not.

USD/CAD’s break of 1.3262 minor support suggests short term topping at 1.3329, after failing to sustain above 1.3327 resistance. Intraday bias is turned back to the downside for 55 day EMA (now at 1.3177). But downside should be contained above 1.3104 resistance turned support to bring another rally. On the upside, sustained break of 1.3327 should confirm completion of consolidation pattern from 1.3664. Further rise should be seen to retest 1.3664 high. 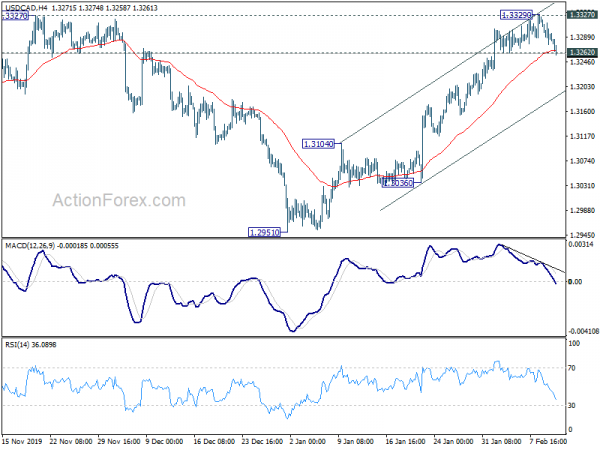 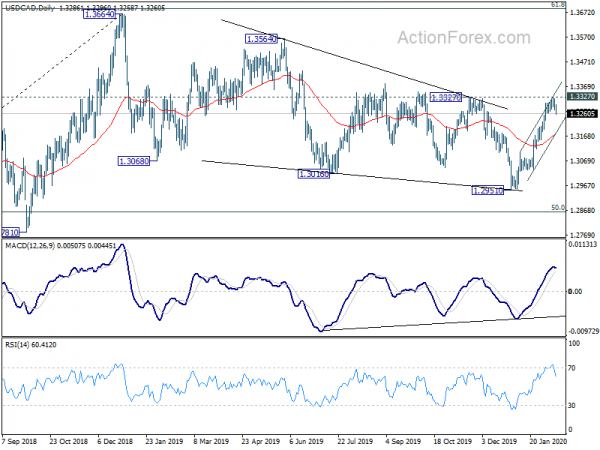 A Bumpy Road Ahead