Dollar surges to highest level against Euro as helped by rebound in US treasury yields overnight, as well as extended record runs in stocks. Nevertheless, sentiments in Asian turn back into risk-off mode, Yen and Swiss Franc are outshining the greenback for today. Australian and New Zealand Dollars are back under some pressure. For the week so far, Euro is the worst performing one, followed by Yen and Swiss. Kiwi and Aussie are the strongest.

Technically, EUR/USD’s break of 1.0879 confirms medium term down trend resumption . EUR/GBP is also pressing 0.8386 support and break will bring retest of 0.8276 low. EUR/JPY is heading to 119.24 cluster support. Decisive break there will solidify the case of near term bearish reversal for retesting 115.86 low. It looks like Euro’s general weakness will persist for the near term.

According to health officials in China’s Hubei province, coronavirus death tolls surged by a record 242 on February 12, bringing total deaths in the province to 1310. A massive 14840 new confirmed cases were also reported in Hubei alone, dwarfing the 2015 cases reported for February 11 throughout whole of China. The surge in numbers were said to be due to new counting methods. Excluding cases confirmed using the new methods, the number of new cases rose by only 1,508 in the province.

The new reporting system created much confusions and raised questions on transparency again. Meanwhile, at the time of writing, there is no update from the National Health Commission on country-wide numbers of the Wuhan coronavirus yet, which is very unusual.

RBA Lowe: Global interest rates to stay low for years, if not decades

RBA Governor Philip Lowe said today, “it is quite likely that we are going to be in this world of low interest rates for years, if not decades, because it is driven by structural factors.” For now, he added that RBA is not “obsessed” with getting inflation back to 2-3% target in a hurry.

Lowe repeated the central bank’s recent decision regarding balancing the risk of more monetary stimulus. “We’re conscious in our interest rate decisions that when we cut interest rates from cyclical perspectives it encourages people to borrow even more from an already high level of debt because of these structural reasons,” he said. “It’s a consideration in our decisions at the moment.”

Lowe also urged more from the government to help the economy. “We have not had any fiscal stimulus in Australia,” he said. “I would like to see both business and government use the opportunity to make investments. Australian governments and business can borrow at the lowest rates of since Australia became a federation.”

RBNZ Assistant Governor Christian Hawkesby said in a Bloomberg interview that the central bank has a “genuine neutral bias” on rates, and “a genuine openness about where things go from here.” For now, “we can stay on hold, keep rates low for a long time”.

Regarding the impact of China’s coronavirus outbreak, disruptions to New Zealand economy could last just six weeks and save only 0.3% off Q1 growth. “If things are a lot worse, then the projections will look different and the policy response will look different,” he said. “At the moment the markets are probably more relaxed than they were earlier in the month. But equally we know that it’s asymmetric. If the median is six weeks it can’t be a whole lot shorter than that but it could be quite a lot longer.”

On the idea of rate hike, RBNZ is currently adopting a wait and see approached. He said, “When you’re in a period when there is no spare capacity left and we haven’t had inflation below target for a long time then you are in an environment where it’s safer to start lifting interest rates. We’re not close to that time. We’ve still got a long period when we can wait and watch.”

Japan PPI rose 1.7% yoy in January, up from 0.9% yoy, beat expectatio nof 1.5% yoy. Australia consumer inflation expectation slowed to 4.0% in February, down from 4.7%. UK RICS house price balance surged to 17 in January, up from -2, hitting the higest level since May 2017. Germany will release CPI final today. But main focus will be on US CPI, as well as jobless claims.

EUR/USD drops to as low as 1.0865 so far and intraday bias stays on the downside. Break of 1.0879 support indicates medium term down trend resumption. Next near term target is 161.8% projection of 1.1172 to 1.0992 from 1.1095 at 1.0804. On the upside, above 1.0925 minor resistance will turn intraday bias neutral and bring consolidations first. But recovery should be limited by 1.0992 support turned resistance to bring fall resumption. 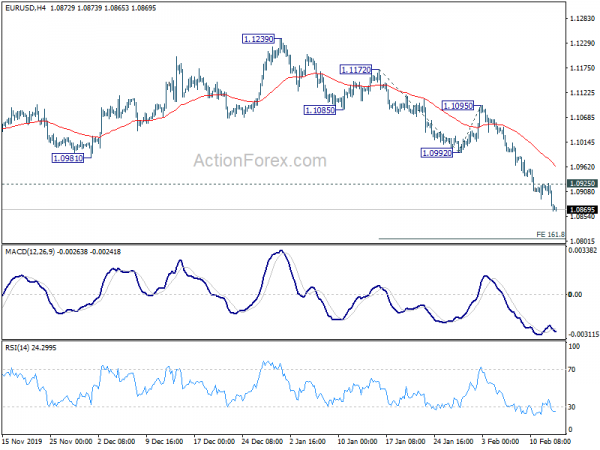 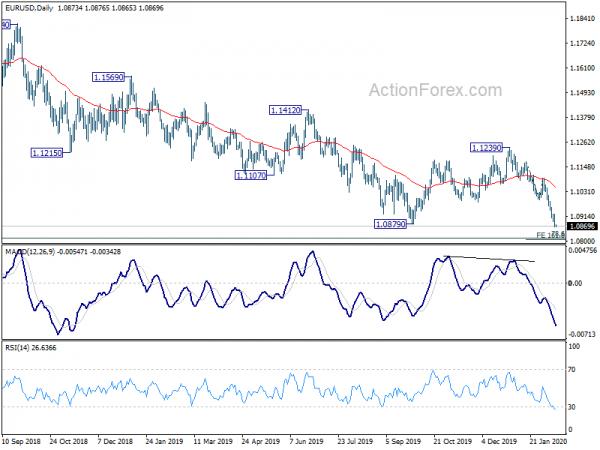