Stocks in Panic after Fed, RBNZ and BoJ Emergency Actions, No End to Risk Aversion Yet

It’s a bit unsure whether emergency policy actions by major central banks are calming the markets, or inducing fears. Fed, RBNZ and BoJ surprise the markets by unscheduled announcements today, with measures to counter the impact of coronavirus pandemic. Fed cut interest rate by -1.00% to 0-0.25%, with restart of QE. RBNZ cut -0.75% to 0.25%. BoJ doubles ETF purchases and adds new loan program. Asian stock markets are still hammed, together with US futures. Nevertheless, while Asian indices are weak, they’re held above Friday’s low so far.

The currency markets are relatively steady with Yen slightly higher, followed by Swiss Franc. Commodity currencies are the weakest, as led by Canadian for now. Dollar is mixed in spite of Fed’s all-in easing. Technically, USD/CHF and USD/JPY are both worth a watch today. Both failed to break 61.8 retracement of prior near term fall (from 0.9484 to 0.9181 in USD/CHF and from 112.22 to 101.18 in USD/JPY). Break of 0.9411 in USD/CHF and 104.50 in USD/JPY will suggest completion of corrective recovery. Retest of 0.9181 and 101.18 short term bottom will then be seen.

Fed delivered another emergency rate cut late Sunday, by -1.00% to 0-0.25%. Federal funds rate are now back at the record low it hit during the 2008 global financial crisis. Additionally, Fed will restart asset purchases to boost its holdings by at least USD 700B, with USD 500B of treasury securities and USD 200B of agency mortgage-backed securities. Loretta Mester dissented, preferring a smaller rate cut instead.

Additionally, there are other measures announced too. Banks are allowed to borrow from the discount window for a long as 90%. Reserve requirement ratios were also lowered to 0%. Fed will also coordinate with other major central banks to ensure Dollar availability through liquidity swap line arrangements.

In the statement, Fed said that the coronavirus outbreak has “harmed communities and disrupted economic activity in many countries” including the US. The effects will “weigh on economic activity in the near term and pose risks to the economic outlook.” Fed will keep interest rate at the current range ‘until it is confident that the economy has weathered recent events and is on track to achieve its maximum employment and price stability goals.”

In an unscheduled announcement, RBNZ lowered Official case rate by -0.75% to 0.25%, and pledges to keep it there for at least the next 12 months. Additionally, should further stimulus be required, a “Large Scale Asset Purchase Programme” of government bonds would be preferable to another OCR cut.

In the statement, it said that “negative economic implications of the COVID-19 virus continue to rise warranting further monetary stimulus.” The impact to the New Zealand economy “is, and will continue to be, significant”. Demand will be “constrained”, as will domestic production. Spending and investment will be “subdued for an extended period”.

After an emergency meeting today, BoJ announced further monetary easing to counter the economic impact of coronavirus pandemic. In particular, annual pace of ETF purchase is doubled from JPY 6T to JPY 12T. J-REIT purchases are also doubled to JPY 180B per year.

The Special Funds-Supplying Operations to Facilitate Corporate Financing is introduced to provide loans against corporate debt at 0% interest rate with maturity up to 1 year. The operation will be conduced until end of September this year.

The policies under the yield curve control is held unchanged. Short-term policy interest rate target is kept unchanged at -0.10%. BoJ will continue to purchase JGBs to keep 10-year yield at around zero percent. Annual pace of monetary base expansion is kept at around JPY 80T.

The central bank also pledged to “take additional monetary easing steps as needed without hesitation with a close eye on the impact from the coronavirus epidemic for the time being”.

The National Bureau of Statistics sounded optimistic in its statement. It said, while the epidemic has incurred relatively big shocks to economic activities, the impacts are largely “short-term, external and controllable.” “The economy has withstood the shocks of the epidemic,” it added.

The economic calendar is rather light today. Swiss PPI and US Empire state manufacturing index are featured. 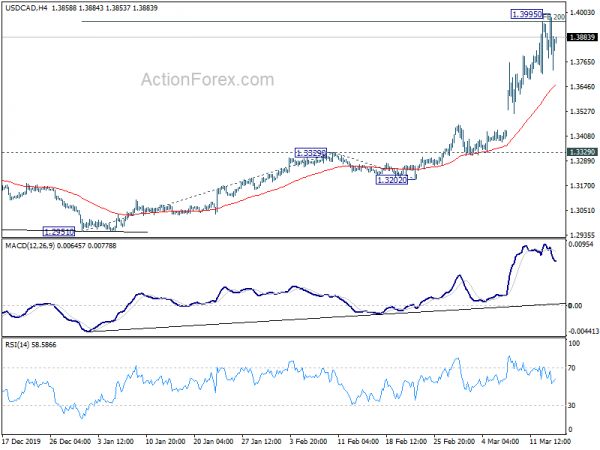 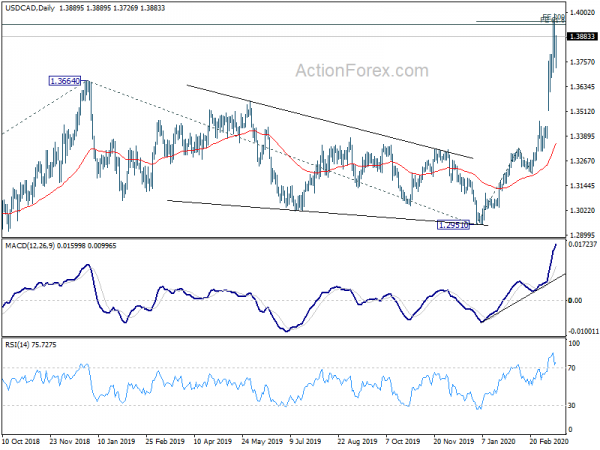