Dollar and Yen are trading as the stronger ones today as risk aversion seems to be coming back as another quarter starts. Commodity currencies are thew weakest ones as led by Canadian Dollar for now. Private job data from the US were not as bad as expected. But just like some other data, the full impact of coronavirus pandemic is not fully reflected yet. The outlook for the global economy, including that of the origin of the pandemic China, remains grim, probably except for some industries food manufacturing and pharmaceuticals.

Technically, Dollar is regaining some strength for the rebound that started yesterday. EUR/USD’s break of yesterday’s low is a positive sign for the greenback. But it’s unsure whether Dollar would be dragged down by Yen. 106.75 support and 109.70 resistance in USD/JPY will be watched closely for hints. While it’s still a bit far, EUR/JPY is accelerating down towards 116.12 low. Break there should resume larger down trend.

US ADP employment dropped only -27k, but coronavirus impact not fully reflected

“It is important to note that the ADP National Employment Report is based on the total number of payroll records for employees who were active on a company’s payroll through the 12th of the month. This is the same time period the Bureau of Labor and Statistics uses for their survey,” said Ahu Yildirmaz, co-head of the ADP Research Institute. “As such, the March NER does not fully reflect the most recent impact of COVID-19 on the employment situation, including unemployment claims reported on March 26, 2020.”

Eurozone unemployment rate dropped to 7.3% in February, down from 7.4%, beat expectation of 7.4%. That’s the lowest level since March 2008. EU unemployment was unchanged at 6.5%, lowest since the start of the series in 2000.

Chris Williamson, Chief Business Economist at IHS Markit said: “The concern is that we are still some way off peak decline for manufacturing. Besides the hit to output from many factories simply closing their doors, the coming weeks will likely see both business and consumer spending on goods decline markedly as measures to contain the coronavirus result in dramatically reduced orders at those factories still operating. Company closures, lockdowns and rising unemployment are likely to have an unprecedented impact on expenditure around the world, crushing demand for a wide array of products. Exceptions will be food manufacturing and pharmaceuticals, but elsewhere large swathes of manufacturing could see downturns of the likes not seen before”

Italy Gualtieri: 6% GDP contraction realistic, but there will be vigorous rebound

Italy’s Economy Minister Roberto Gualtieri said the forecasts of -6% GDP contraction this year are “realistic”. Though, he insisted the economy can “aim at a vigorous rebound” after the coronavirus pandemic.

Meanwhile, he said a new stimulus package is set to be approved this month. That would be “significantly larger” than the measures of EUR 25B passed in March. The package would include extensions of state-backed guarantees for businesses, unemployment benefits and low incomer support.

Gualtieri also reiterated the push for a coordinated, shared fiscal response within EU, rather than using the European Stability Mechanism. He added, “new solutions are need to grant parity of conditions and to define an adequate shared and responsible response.”

UK PMI Manufacturing was finalized at 47.8 in March, down from February’s 48.0. Business optimism slumped to series-record low and supply chain disruption intensified.

“The latest survey numbers underscore how the global outbreak of COVID-19 is causing huge disruptions to production, demand and supply chains at UK manufacturers… The effects were felt across most of manufacturing, with output falling sharply in all major sectors except food production and pharmaceuticals… With restrictions aimed at slowing the spread of the virus expected to stay in place for some time, expectations of further economic disruption and uncertainty meant business optimism slumped to a series-record low. However, on a slightly more positive note, manufacturers still expect to see output higher in one year’s time.”

In the minutes of March 18 meeting, RBA said that Australia would likely experience a “very material contraction in economic activity, which would spread across the March and June quarters and potentially longer.”. The size of contraction would depend on the “extent of the social distancing requirements, and potential lockdowns” for containing the coronavirus. Also, there will be “significant job losses over the months ahead”. Economy is expected to recover following containment of the coronavirus, “but the timing of this was uncertain”.

At the meeting, RBA decided to roll out a package a measures of four elements. Cash rate was lowered to 0.25%. Purchase of government bonds to keep 3-year yield at 0.25%. Launched a term funding facility to support credit to businesses, and adjustment of interest rate on ES balance held by financial institutions.

Australia AiG Performance of Manufacturing Index jumped to 53.7 in March, up from 44.3. The reading indicates a return to growth after four months of contraction in the sector.

AiG said: “This somewhat surprising expansion – in the midst of the escalating COVID-19 pandemic and emerging recession – is almost entirely due to a huge surge in demand for manufactured food, groceries and personal care items, as shoppers stock up on processed food, toilet paper, cleaning products and other household essentials”.

Also from Australia, building permits rose 19.9% mom in February, much higher than expectation of 4.5% mom.

Also from Japan, PMI manufacturing was finalized at 44.8 in March, down from February’s 47.8. Manufacturing output contracted at the sharpest rate since aftermath of 2011 tsunami. Production volumes slumped at the fastest rate for almost nine years, with sharpest drop in demand since April 2011. Supply chain issues also intensified further.

Joe Hayes, Economist at IHS Markit said, “the cascading impact of COVID-19 on the global economy is diminishing the chances of a V-shaped recovery.”

Dr. Zhengsheng Zhong, Chairman and Chief Economist at CEBM Group said: “To sum up, the manufacturing sector was under double pressure in March: business resumption was insufficient; and worsening external demand and soft domestic consumer demand restricted production from expanding further. Whereas, business confidence was still high and the job market basically returned to the pre-epidemic level, laying a positive foundation for the economy’s rapid recovery after the epidemic.” 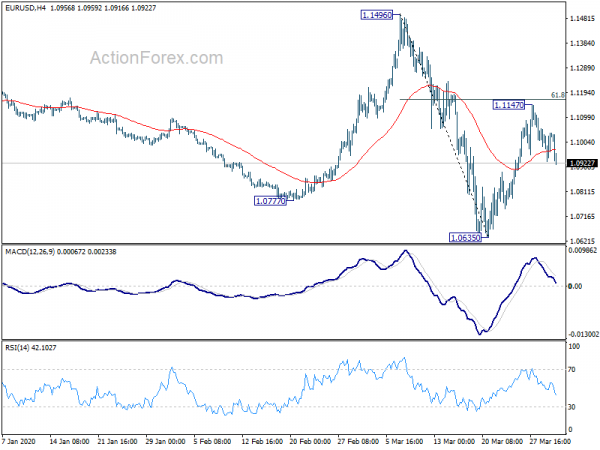 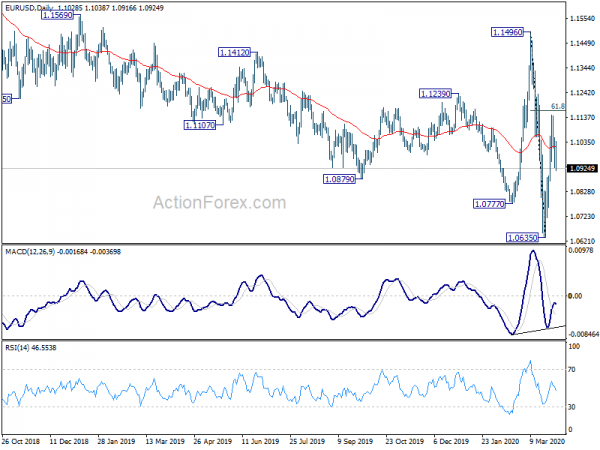