Commodity currencies remain the strongest one today as supported by risk appetite. Sentiments are lifted by expectations of lockdown exits as well as optimism on coronavirus treatment. Dollar remains generally weak with Fed providing little inspirations. Euro and Swiss Franc are not much better than the greenback. Euro’s weakness is the main reason keeping Dollar index afloat. Focus is turning to ECB rate decision, as well as Eurozone GDP data today. We’ll see if Euro traders would finally take a direction against the greenback.

Technically, Aussie continues to look unstoppable. EUR/AUD, AUD/JPY, AUD/CAD are all around key levels and a pull back is due. We’d continue to look for sign of topping as AUD/USD approaches 0.6670 key resistance. But break of 0.6505 minor support is needed to signal temporary topping first. USD/CAD is on track to extend the correction from 1.4667 through 1.3855 support. But we’d expect strong support from 1.3762 fibonacci level to bring rebound.

Fed kept monetary policy unchanged overnight as widely expected and reiterated the pledge to maintain rate target at 0-0.25% ” until it is confident that the economy has weathered recent events and is on track to achieve its maximum employment and price stability goals.” Chairman Jerome Powell said there will be a “large increase” in economic activity when people are coming out to spend again while unemployment goes down. However, “it is unlikely it will bring us quickly back to pre-crisis levels,” he added. “Trying to be really precise about when that might happen and what the numbers might look like – it is very tough to do that.”

Dollar softened a little bit further after FOMC’s announcement and press conference. But there was no avalanche selling. Dollar index is back pressing 55 day EMA and outlook is unchanged. Price actions from 102.99 are seen as a corrective pattern. Fall from 100.93 is likely the third leg. Break of 55 day EMA will pave the way to 98.27 support and possibly below. But downside should be contained by 61.8% retracement of 94.65 to 102.99 at 97.83 to bring rebound. 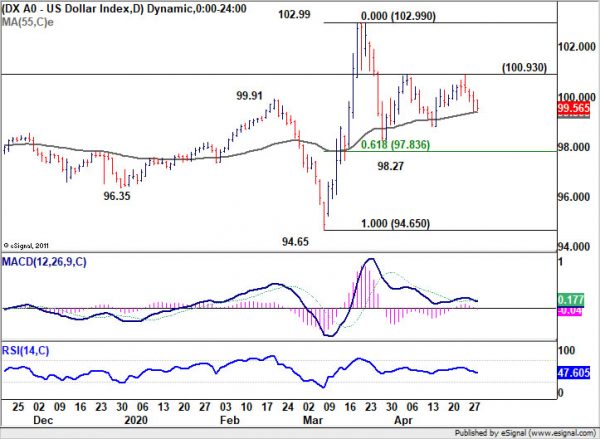 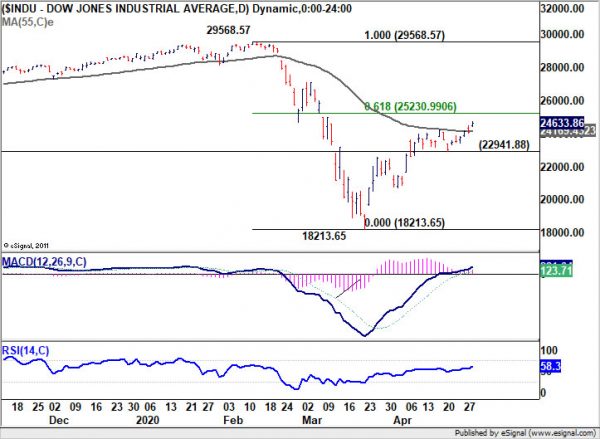 The parliament is set to enact a JPY 25.69 trillion supplementary budget for fiscal 2020 today. The House of Councillors is generally expected to approve the extra budget, which was passed by House of Representative already, to cushion the economy from the impact of the coronavirus pandemic. Meanwhile, Prime Minister Shinzo Abe would announce the extension of nationwide state of emergency that is due to end next Wednesday.

China’s official NBS PMI manufacturing dropped to 50.8 in April, down from 52.0, missed expectation of 51.0. In particular, new export orders plunged sharply to 33.5. But PMI non-manufacturing improved to a three-month high of 53.2, up from 52.3, beat expectation of 52.8. The set of data suggests that China’s economy is on a double-track. Hope of a strong come back in manufacturing is dim as coronavirus pandemic is continuing elsewhere. Global recession will continue to heap on downward pressure in the sector in the coming months.

ANZ said, “a glimmer of light at the end of the tunnel emerged over the month, with the country making solid progress in its COVID-19 battle”. However, “the levels of most indicators remain at levels that were frankly unthinkable before COVID-19 reached our shores. Businesses are really hurting. And it’s not just expectations. The proportion of firms that have already seen lower activity and have let staff go continues to rise. That will clearly remain a theme for some time.

Looking ahead – ECB to highlight an extremely busy day

The economic calendar is very busy today. ECB rate decision and press conference is a highlight. We expect ECB to keep its powder dry at this week’s meeting, after launching several stimulus measures last month. The central bank should maintain a dovish tone, indicating disappointing economic data and pledging the take further actions if needed. As EU has so far failed to agree on substantial fiscal actions, we expect ECB will in coming months step up its QE measures. Extension of PEPP would be a likely move. More in ECB to Send a Dovish Tone and Pledge to Take Further Actions if Needed. Rate Cut Appears Less Relevant than QE. 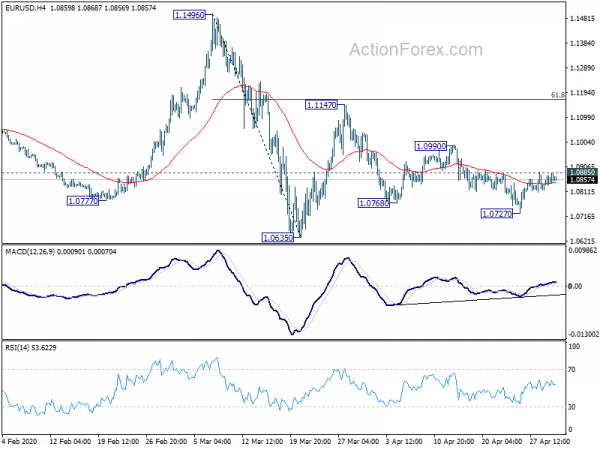 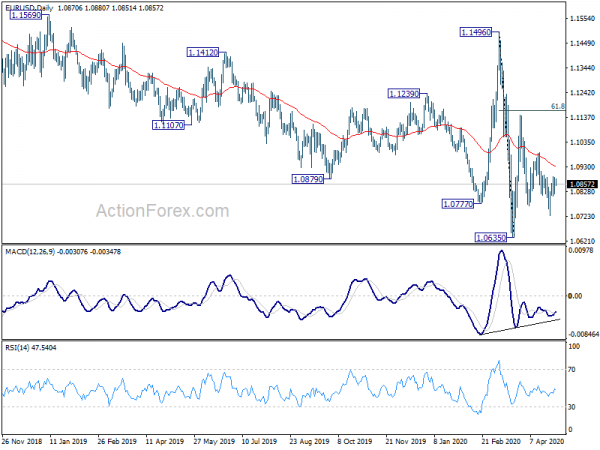