Sterling weakens mildly today after UK sold government bond with a negative yield for the first time ever. According to the Debt Management office, It auctioned GBP 3.75B of 3-year bonds at an average rate of -0.003%. Demand was weak too with bid-to-cover ratio at 2.15, lowest since March. Nevertheless, Dollar and yen are not too far away with investors staying in positive mood. DOW futures point to another day of higher open. New Zealand and Australian Dollar continues to extend gains while Swiss Franc is having a sudden spike up.

Technically, GBP/USD and GBP/JPY are losing some upside momentum but this week’s rebounds are not threatened yet. EUR/GBP is more of the focus in Sterling weakness, and is still on track to 0.8987 near term fibonacci resistance. Euro’s strength is somewhat capped by the volatility in EUR/CHF. In spite of today’s retreat, further rise is still expected in EUR/CHF as long as 1.0578 minor support holds, to 1.0710 cluster resistance. However, break of 1.0578 would turn focus back to 1.0503 low. AUD/USD would be a focus for the rest of the week as rally resumption will put 0.6670 key resistance level into focus. 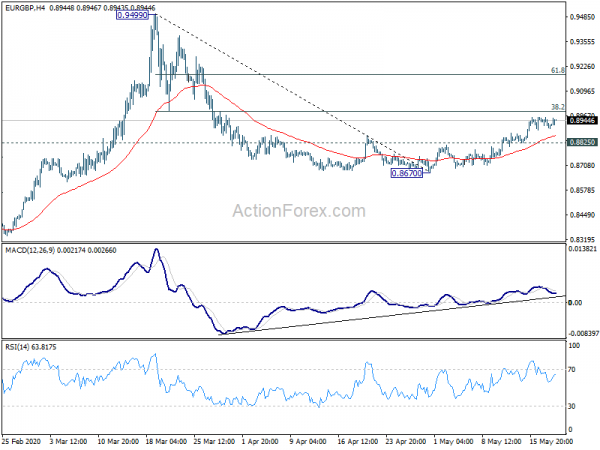 Canada in deflation with CPI at -0.2% in April

Canada CPI turned negative in April, dropped to -0.2% yoy, down from March’s 0.9% yoy. That’s also slightly below expectation of -0.1% yoy. The decline was mainly due to fall in energy prices as a result of coronavirus pandemic.

Eurozone current account surplus narrowed to EUR 27.4B in March, down from EUR 37.8B.

According to preliminary data, Australia retail sales dropped -17.9% mom in April. That’s the biggest seasonally adjusted fall on record, and came after the biggest jump in March. Comparing to a year ago, retail turnover dropped -9.4% yoy. Falls were seen in every industry, with particularly strong falls in food retailing, cafes, restaurants and takeaways, and clothing, footwear and personal accessories.

Westpac also said, ‘we do not expect the economy to return to pre-Coronavirus levels of activity before 2022.” But for now, RBA has already indicated that it’s “committed to maintaining its significant support for the economy for the foreseeable future.”

RBNZ Governor Adrian Orr said in a Bloomberg interview today that he’s currently “targeting a low and flat yield curve through the purchases bonds.” The central bank “does not want to go to negative rate at this point”. It’s “prepared to go to negative rate but a lot later” And it remains one option for RBNZ.

Also, he reiterated the view that “the operational challenge still remains with some banks still working on being able to actually operate with negative official cash rate and negative wholesale rates”.

GBP/USD continues to struggle around 4 hour 55 EMA and intraday bias remains neutral first. Recovery from 1.2065 might extend higher. But as long as 1.2467 resistance holds, another fall is mildly in favor. We’ll holding on to the view that corrective rise from 1.1409 should have completed. On the downside, below 1.2065 will target a test on 1.1409 low. However, on the upside, break of 1.2467 will turn bias to the upside for 1.2647 resistance. 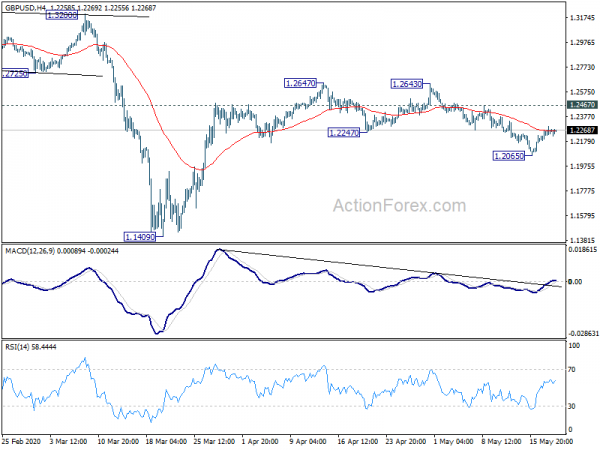 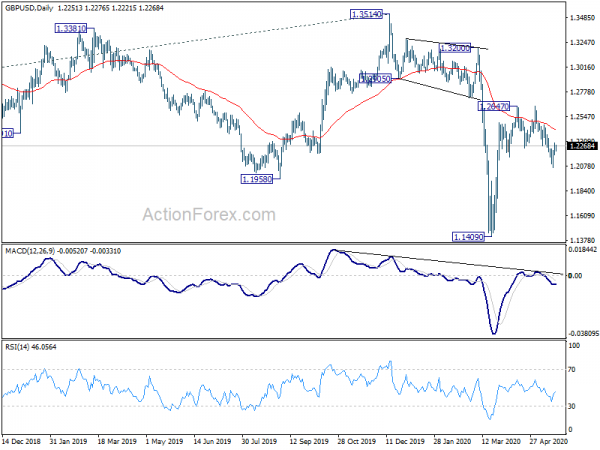