Risk appetite continues today with mild strength in Asian markets, following the slightly higher close in US overnight. It seems that investors completing ignoring the unrest in the US, as well as its tension with China. In the currency markets, Sterling is currently the strongest one for today, followed by Canadian. Australian Dollar is firm as one of the strongest after RBA stayed firmly on hold. New Zealand Dollar is the weaker one, paring some of recent gains. Yen and Dollar are the weakest.

Technically, the rally in AUD/NZD is seen as a reason for Kiwi’s sluggishness this week. Rise from 0.9994 has resumed with focus on 1.0865 resistance, which is close to medium term falling trend line. Sustained break there will open up further rally towards 1.1676. USD/CAD’s strong break of 1.3664 cluster support zone suggests medium term bearish reversal. AUD/USD is now eyeing 0.6826 key resistance to confirm medium term bottoming too. 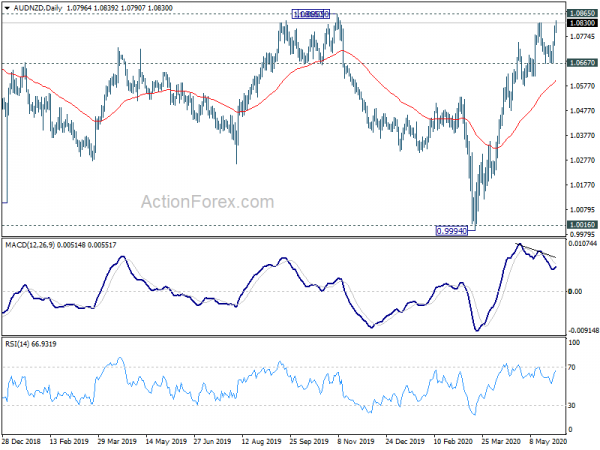 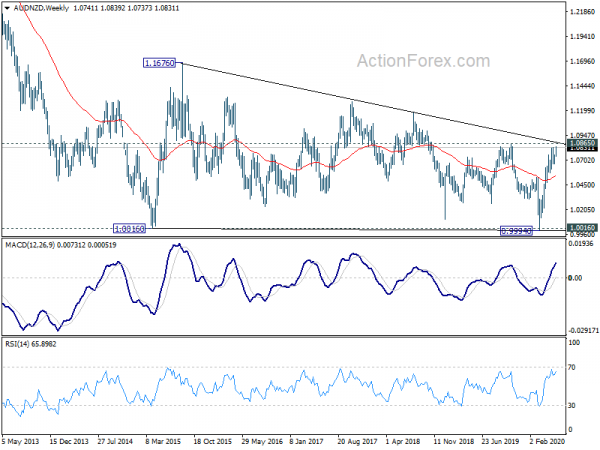 Depth of downturn less than earlier expected, but RBA remains firmly on hold

RBA left monetary policy unchanged as widely expected. Cash rate is held at 0.25%. The target for 3-year government bond yield is also held at 0.25%. It maintained the pledge that, until progress is made towards full employment and inflation, “the Board will not increase the cash rate target”. Also, 3-year AGS yield target will “remain in place”.

The Bank had just purchased government bonds on one occasions since last meeting. Total purchase to date reached AUD 50B only too. Though, it remains ” to scale-up its bond purchases again and will do whatever is necessary to ensure bond markets remain functional and to achieve the yield target for 3-year AGS.”

On the economy, RBA said the depth of the downturn will be “less than earlier expected”. Rate of new coronavirus infections in Australia has “declined significantly” and some restrictions have been “eased earlier than was previously thought likely”. Also, hours worked could have stabilized in early May while there was pickup in some consumer spending.

Though, the “the outlook, including the nature and speed of the expected recovery, remains highly uncertain and the pandemic is likely to have long-lasting effects on the economy.

Australia current account surplus widened notably to AUD 8.4B in Q1, up from AUD 1.7B and beat expectation of AUD 6.3B. The current account surplus was driven by a trade surplus of AUD 19.2B and a narrowing of net income deficit to AUD 10.6B. In seasonally adjusted chain volume terms, the balance on goods and services surplus should contribute 0.5% to Q1 GDP growth.

ABS Chief Economist Bruce Hockman said: “The impact of COVID-19 was evident across the Balance of Payments this quarter, with falls for imports and exports of both goods and services in volume terms”.

“The fall in export prices coincided with the COVID-19 outbreak, which was declared a global pandemic in March 2020,” business prices delivery manager Geoff Wong said. “The COVID-19 outbreak affected demand in export markets and disrupted supply chains, such as sea and air freight.”

The Wall Street continued to ignore the unrest in the US, triggered by police killing of the unarmed black man George Floyd. President Donald Trump expressed his support for “peaceful protesters”. Yet, he also threatened to deploy military to end “riots and lawlessness”. Separately, New York City joined other cities to impose a late-night curfew, from 11pm to 5am.

Major US indices ended slightly higher, with NASDAQ continuing to outperform DOW and S&P 500. The strong rally form 6631.42 continued overnight to close up 0.66% at 9552.05. Daily MACD’s flattening is a sign of loss of upside momentum. Also, we’re seeing such rise as the second leg of a medium term correction pattern from 9838.37. Hence, while a breach cannot be ruled out, 9838.37 should eventually provide strong enough resistance to bring a near term reversal. But after all, break of 9144.28 support is needed signal short term topping first. Otherwise, the party will go on. 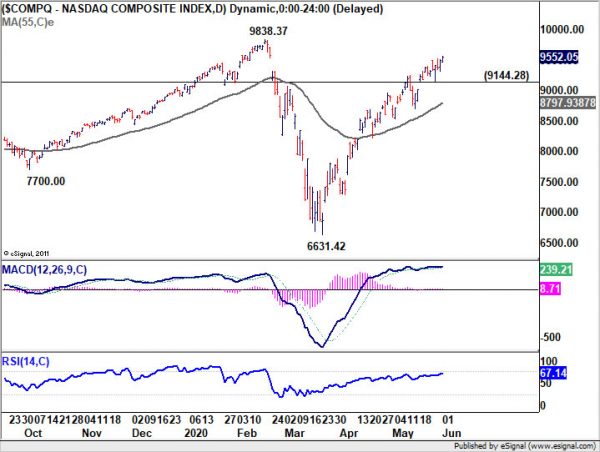 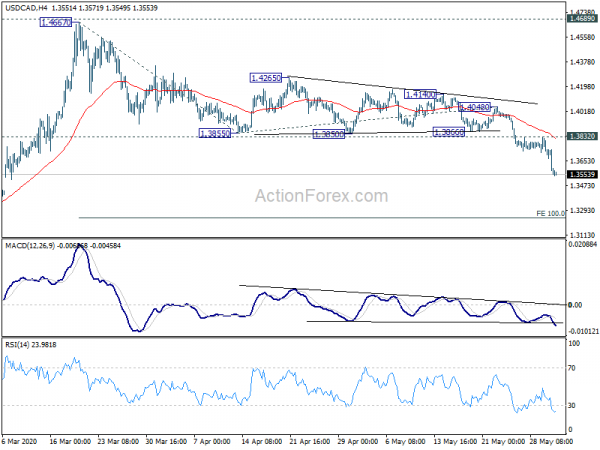 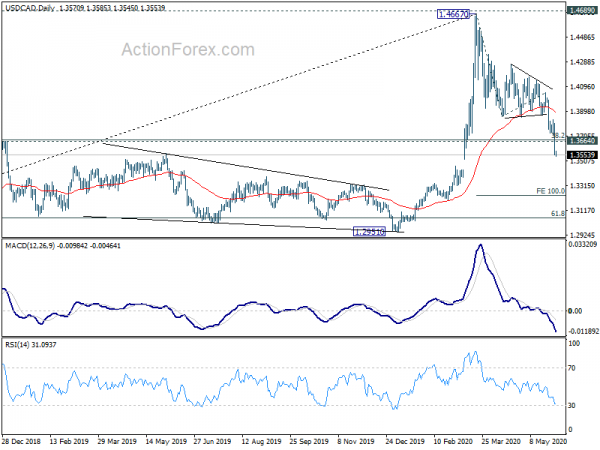