Sterling drops notably today after BoE announced to expand the asset purchase program as widely expected. Australian Dollar is currently following as second weakest, then New Zealand Dollar. Markets are in slight risk-off mode today, as European indices are trading in slight red. Yen and Dollar ride on the trade and strengthen broadly. Though, Swiss Franc is not following and it’s trading mixed after SNB rate decision.

Philadelphia Fed Manufacturing Business Outlook rose notably to 27.5 in June, up from -43.1. That’s also the first positive reading since February. Future activity index rose 17pts to 66.3, hitting the highest level in nearly 30 years. New orders (16.7), and shipments (25.3) returned to positive territory after negative readings over the past few months. Employment stayed week despite improvement, with numbers of employees at -4.3 and average employee workweek at -6.5.

“The job market appeared to show early signs of a rebound in May as restrictions eased and many began to return to work,” said Ahu Yildirmaz, vice president and co-head of the ADP Research Institute. “Industries that led job growth were construction, healthcare and administrative support services while manufacturing and finance continued to show loss as a result of COVID-19.”

On the economy, BoE noted that GDP contracted by around -20% in April. But “evidence from more timely indicators suggests that GDP started to recover thereafter”. While unemployment rate was unchanged at 3.9% in the three months to April, “other and more timely indications from the claimant count, HMRC payrolls data and job vacancies suggest that the labour market has weakened materially”. Business surveys also suggest a “weak outlook for employment in coming quarters”. The “collapse in global oil prices” had direct effects on the slow down of inflation to 0.8% in April, “Sharp drop in domestic activity is also adding to downward pressure on inflation”.

Looking ahead, “the emerging evidence suggests that the fall in global and UK GDP in 2020 Q2 will be less severe than set out in the May Report”. But there is risk of “higher and more persistent unemployment”. “The economy, and especially the labour market, will therefore take some time to recover towards its previous path.”

SNB left the monetary policy unchanged in June. Meanwhile, the members reiterated the commitment to intervene in the currency market as Swiss franc has remained “highly valued”. Economic and inflation forecasts for this year were sharply downgraded as a result of the coronavirus pandemic and related restrictive measures .

On economic developments, SNB noted that the country is in “a sharp recession”. Business activities contracted across different industries, as a result of “massive decline in foreign demand and delivery problems”. The service sector, in particular “the hospitality industry, passenger transport, the entertainment industry and parts of the retail trade, is also affected. This was not seen in previous recessions.

Against this backdrop, SNB revised lower this year’s GDP growth to -6%. Growth will return to the positive territory in 2021. Dismal growth outlook and weakness in oil prices have also led to downgrade in inflation outlook. Headline CPI is expected to fall to -0.7% y/y this year, before improving to -0.2% in 2021. Inflation will return to +0.2% in 2022.

Ahead of the policy decision, SNB also released the Financial Stability Report today. it’s noted that “economic and financial conditions for the Swiss banking sector deteriorated markedly during the last few months of the reporting period:. The coronavirus pandemic “triggered a significant correction on financial markets and a sharp drop in global economic activity”. Economic and financial outlook “has worsened considerably” and is “subject to unusually high uncertainty”.

Australia employment contracted -227.7k in May, unemployment rate jumped to 7.1%

“The ABS estimates that a combined group of around 2.3 million people – around 1 in 5 employed people – were affected by either job loss between April and May or had less hours than usual for economic reasons in May,” Bjorn Jarvis, head of labour statistics at the ABS said.

New Zealand GDP shrank -1.6% qoq in Q1, worst than expectation of -1.0% qoq. That’s also the largest decline in 29% as the initial effects of coronavirus restrictions impacted on economic activity. “The 1.6 percent fall surpassed quarterly falls during the global financial crisis in the late 2000s,” national accounts senior manager Paul Pascoe said. “It is the largest quarterly fall since the 2.4 percent decline in the March 1991 quarter.”

Finance Minister Grant Robertson said “the biggest impact of the global recession and Alert Level 4 public health restrictions will be seen in the current June quarter.” He added, “now, our focus is on protecting jobs and supporting the economy to recover and rebuild through the investments made in Budget 2020 and by the COVID Response and Recovery Fund. By opening up the economy quicker than forecast, we’ve got a head start on our recovery.”

GBP/USD’s break of 1.2454 suggests resumption of fall from 1.2813. Intraday bias is back on the downside. Sustained trading below 55 day EMA (now at 1.2473) will argue that whole rebound from 1.1409 has completed. Deeper fall would be seen to 1.2065 support for confirmation. On the upside, break of 1.2587 minor resistance will turn bias back to the upside instead. 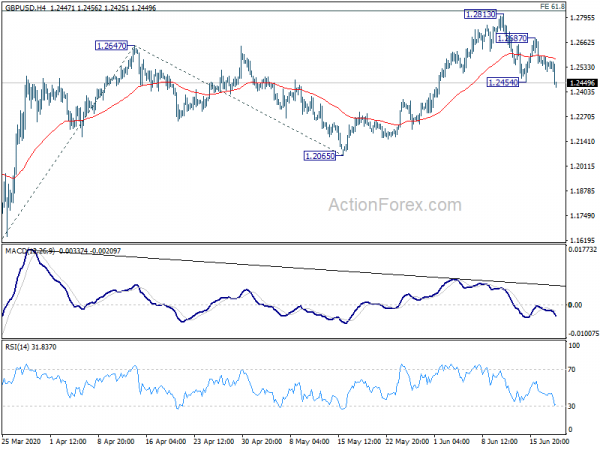 In the bigger picture, while the rebound from 1.1409 is strong, there is not enough evidence for rend reversal yet. Down trend from 2.1161 (2007 high) should still resume sooner or later. However, decisive break of 1.3514 should at least confirm medium term bottoming and turn outlook bullish for 1.4376 resistance first. 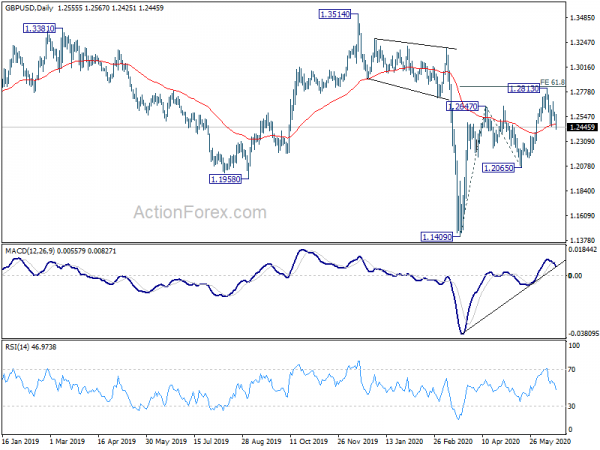