Yen and Swiss Franc are trading as the weakest ones for the week so far, partly due to the strong rebound in stock markets overnight. Sterling is following as the next worst performing as traders continue to price in Brexit uncertainties. Yet, it’s unsure which currency is benefiting most from the current developments. Dollar, Euro and Aussie are bounded in tight range against each other. Investors are probably waiting for more inspirations from the heavy weight economic data like ISMs and NFP.

Technically, USD/JPY’s break of 107.64 minor resistance suggests short term bottoming at 106.07. Further rise is mildly in favor back to 109.85 resistance. EUR/JPY is kept well below 122.11 minor resistance and thus, there is no confirmation of completion of correction from 124.43 yet. Meanwhile, EUR/USD is also in range of 1.1168/1348, staying neural with risk on the downside. The interplay of these three pairs will be worth a watch today.

Fed Powell: The path forward is extraordinarily uncertain, depending on virus and policy actions

Fed Chair Jerome Powell said yesterday that the US economy has “entered an important new phase” and has done so “sooner than expected. But while the bounceback in the economic activity is welcome, “it also presents new challenges, notably, the need to keep the virus in check”.

He added, “the path forward for the economy is extraordinarily uncertain and will depend in large part on our success in containing the virus”. “The path forward will also depend on the policy actions taken at all levels of government to provide relief and to support the recovery for as long as needed,” Powell said.

Separately, San Francisco Fed President Mary Daly said it’s “far too early” to judge the strength of the economy recovery. “I am really just watching the data, what is happening: it is far too early to tell, or to call it, at this point,” she said. “We have insufficient information to make that kind of judgment, in my opinion.” So far, what she sees is “consistent with a slow and gradual recovery.”

RBA Debelle: Still quite likely to have long-lived economic impact from pandemic

RBA Deputy Governor Guy Debelle said “recent data indicate that the outcomes in the Australian economy have been better than earlier feared.” But he also urged not to “lose sight of the fact that the decline in the economy and the impact on households and businesses is historically large”. Fiscal and monetary support that has been provided was, and remains, “warranted.”

The “considerable uncertainty” ahead and it’s “still quite likely” that the economic decline will have a “long-lived impact”. RBA will “maintain the current policies to keep borrowing costs low and credit available, and stands ready to do more as the circumstances warrant.”

Debelle also explained in the speech the details of RBA’s policy responses and the effectiveness.

Also from Australia, private sector credit dropped -0.1% mom in May, versus expectation of 0.2% mom rise.

ANZ said “New Zealand is the envy of the world, with no social distancing measures imposed upon us and restaurants, bars, sporting events, all able to carry on as normal. But the fact remains, New Zealand with a closed border is a significantly smaller economy, at least in the near term, and the recession is just starting to make itself felt.”.

USD/JPY’s break of 107.64 resistance suggest short term bottoming at 106.07, and completion of fall from 109.85. Intraday bias is turned back to the upside for retesting 109.85 first. Break will argue that larger rebound from 101.18 might be resuming to 112.22 key resistance. On the downside, below 106.79 minor support will dampen the bullish case and turn bias back to the downside for 106.07 instead. 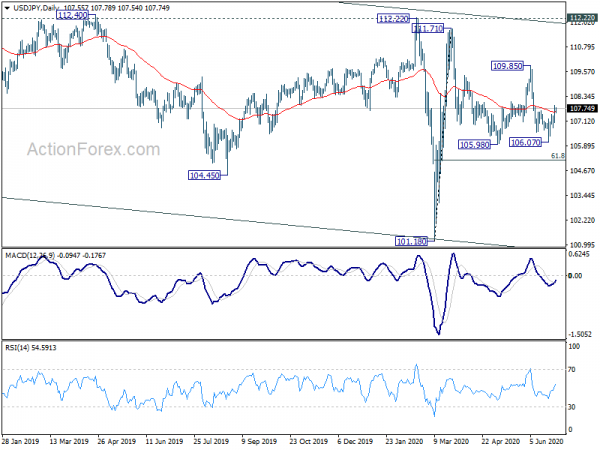