Markets are relatively steady in Asia today. Sentiment was somewhat weighed down by mixed data from China, but there is no apparently follow through selling. New Zealand Dollar continues to be pressured as the country extends coronavirus lockdown by 12 days. Australian Dollar seems to be benefiting from the selloff in Kiwi and it’s trading as the strongest today. As for the week, though, Canadian Dollar is currently the strongest, followed by Swiss Franc. Kiwi is weakest, together with Yen, with the latter sent down by persistent rally in treasury yields.

Technically, there are two developments to watch before weekly close. Firstly, 10-year yield extended this week’s strong rebound overnight to close at 0.716, above 0.7 handle for the first time since early July. The break of 55 day EMA and near term falling trend line resistance are both bullish development. Yet, it’s unsure the current rebound would be as short-lived as the one back in June. We’ll see if TNX could close above 0.7 today. 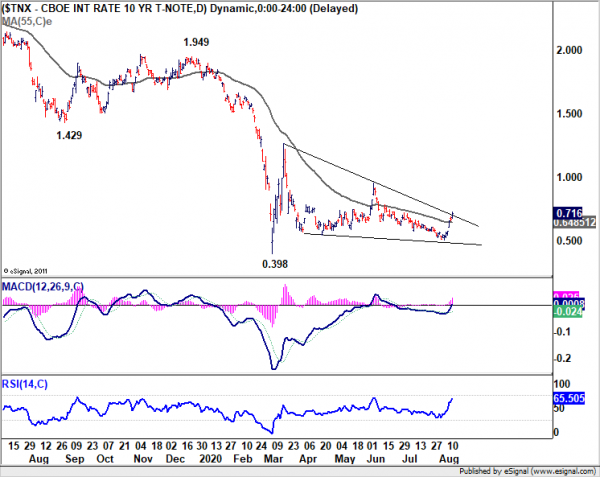 Secondly, Gold appears to be losing a little bit upside momentum, as the rebound brought it close to 4 hour 55 EMA. The overall correction from 2075.18 isn’t completed for sure. The question is whether it’ll turn out to be a sideway pattern or a deeper pull back. Break of 1920.20 minor support would likely bring another fall back towards 1862.55 low first. If we’re going to see both stronger rise in TNX and another fall in Gold, Dollar might finally stage a turnaround. 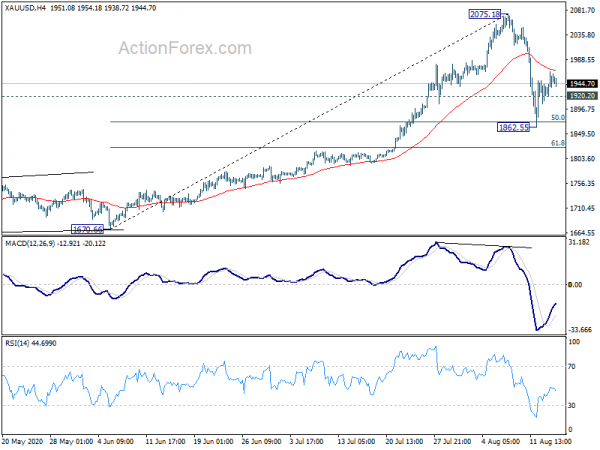 RBA Governor Philip Lowe reiterated the Board’s commitment on not raising interest rate until progress is made towards full employment, with confidence that inflation could sustain in 2-3% target range. He added that “, these conditions are not likely to be met for at least three years”. Hence, it’s “highly likely” that cash rate will be at the current 0.25% level “for some years”. The 3-year yield target of 0.25% also “reinforces this message”.

He also noted that Australian Dollar’s exchange rate is not overvalued even though he’ like it to be lower. Huge amount of intervention is needed to push the Aussie down and it wouldn’t be a successful strategy.

New Zealand BusinessNZ Performance of Manufacturing Index rose to 58.8 in July, slightly up from 56.2. Looking at some details, productions rose from 58.4 to 61.4. New orders rose from 58.2 to 67.4. However, employment dropped from 48.5 to 46.5. Employment remained weak and stayed in contraction for the 5th straight month.

BusinessNZ’s executive director for manufacturing Catherine Beard warned: “we should be careful not to interpret this as a new dawn for the sector, rather a catch-up for many trying to get back to a new sense of normality.”

BNZ Senior Economist, Doug Steel said that “July’s PMI had firmly set up the idea that manufacturing GDP would bounce back strongly in Q3 after what was surely a very large decline in Q2. The latest virus outbreak calls that into question and adds to the reservations that we already had for growth in Q4.”

USD/CNH is still channeling well as fall from 7.1961 extends. This decline is seen as the third leg of the consolidation pattern from 7.1953. Hence, while fall could be seen, we’d expect strong support from 6.8452 to contain downside and bring rebound. Meanwhile, break of 6.9804 resistance will now suggests short term bottoming and turn bias back to the upside. 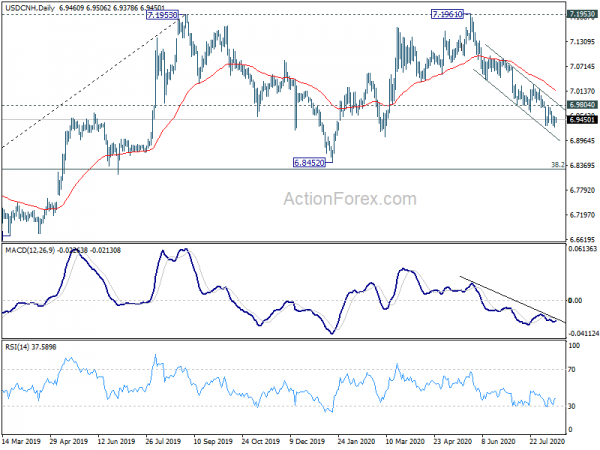 Governor Lael Brainard said Fed and MIT are working on a “multiyear effort to build and test a hypothetical digital currency oriented to central bank uses”.

The objectives are “to assess the safety and efficiency of digital currency systems, to inform our understanding of private-sector arrangements, and to give us hands-on experience to understand the opportunities and limitations of possible technologies for digital forms of central bank money.”

“Lessons from this collaboration will be published, and any codebase that is developed through this effort will be offered as open-source software for anyone to use for experimentation.”

Intraday bias in USD/CHF remains neutral for the moment. Sideway trading from 0.9050 could extend further. but with 0.9241 resistance intact, outlook stays bearish for further decline. On the downside, break of 0.9050 will resume larger down trend. Though, break of of 0.9241 will confirm short term bottoming and turn bias to the upside for 0.9376 support turned resistance. 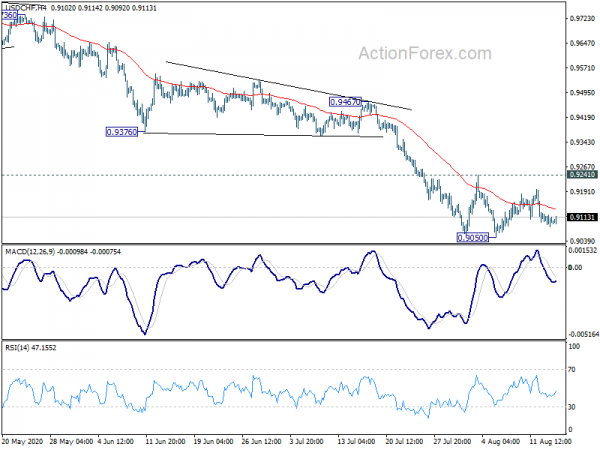 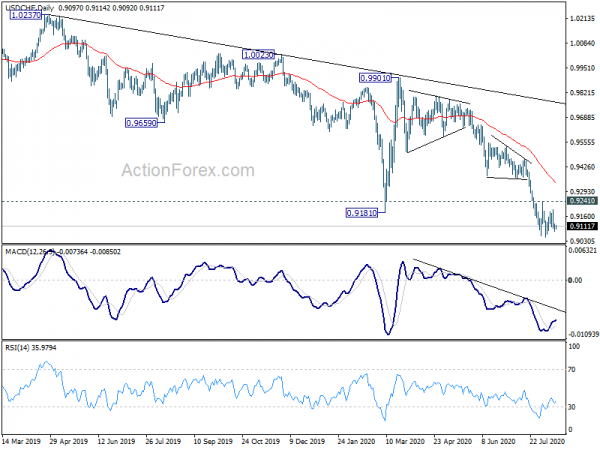