Trading in in the currency markets continue to be relatively subdued. Sterling is so far the strongest one for today. But it’s staying below near term resistance against Euro and Dollar so far. It’s also hovering below yesterday’s high against Yen. Yen appears to be recovery, in particular against Dollar. But any extension in treasury yield’s rally would knock it down easily. New Zealand Dollar and Canadian Dollar are the softer ones for today. Dollar continues to trade mixed, shrugging off retail sales data, awaiting breakout. 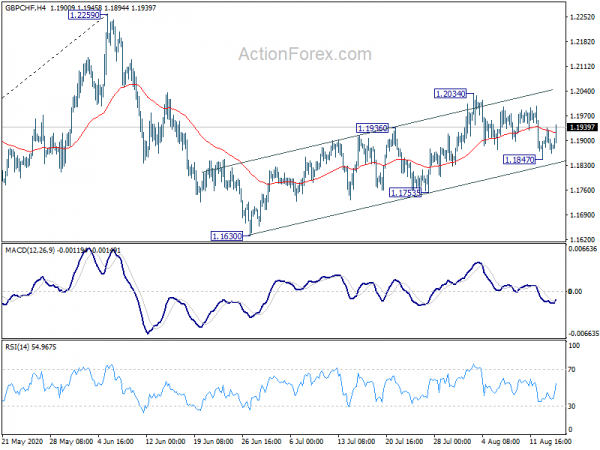 From Canada, manufacturing sales rose 20.7% mom in June, above expectation of 16.4% mom.

Germany’s Economy Ministry said the country is “back on the road to recovery” since tough shutdown was eased since May. Industry’s “rapid catching-up” is continuing, largely driven by automotive sector. But it’s expected to lose momentum due to “weak foreign demand”.

Also, with “somewhat more favorable starting position”, there will be a “strong increase in gross domestic product in the third quarter.”. But the course will depends on the pandemic at home and abroad. Some of Germany’s trading partners are “still heavily impacted by the pandemic”.

“For this reason alone, after the first stronger recovery in May and June, the further recovery process of the German economy will only progress slowly and take a long time to complete.”

RBA Governor Philip Lowe reiterated the Board’s commitment on not raising interest rate until progress is made towards full employment, with confidence that inflation could sustain in 2-3% target range. He added that “, these conditions are not likely to be met for at least three years”. Hence, it’s “highly likely” that cash rate will be at the current 0.25% level “for some years”. The 3-year yield target of 0.25% also “reinforces this message”.

He also noted that Australian Dollar’s exchange rate is not overvalued even though he’ like it to be lower. Huge amount of intervention is needed to push the Aussie down and it wouldn’t be a successful strategy.

New Zealand BusinessNZ Performance of Manufacturing Index rose to 58.8 in July, slightly up from 56.2. Looking at some details, productions rose from 58.4 to 61.4. New orders rose from 58.2 to 67.4. However, employment dropped from 48.5 to 46.5. Employment remained weak and stayed in contraction for the 5th straight month.

BusinessNZ’s executive director for manufacturing Catherine Beard warned: “we should be careful not to interpret this as a new dawn for the sector, rather a catch-up for many trying to get back to a new sense of normality.”

BNZ Senior Economist, Doug Steel said that “July’s PMI had firmly set up the idea that manufacturing GDP would bounce back strongly in Q3 after what was surely a very large decline in Q2. The latest virus outbreak calls that into question and adds to the reservations that we already had for growth in Q4.” 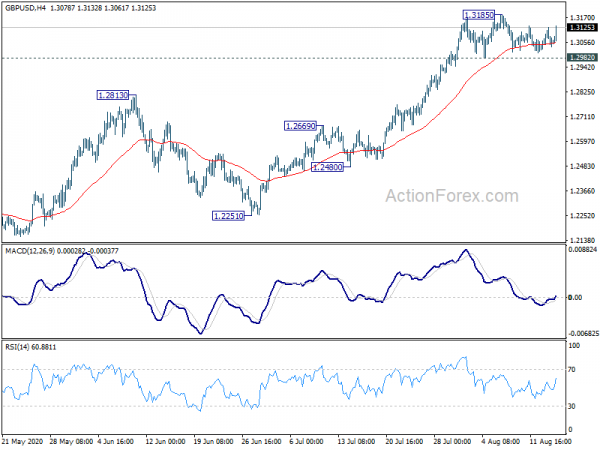 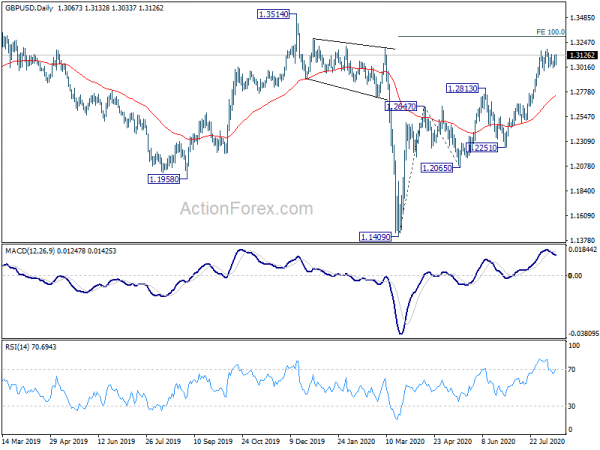