Dollar Softer in Mixed Markets, No Decisive Selling Yet

Markets continue to be rather mixed as investors are awaiting Fed Chair Jerome Powell’s speech at the Jackson Hole symposium. S&P 500 and NASDAQ surged strongly overnight to new record highs. But Asian markets are mixed, with weakness seen in Japan, Hong Kong and Singapore. Dollar weakens broadly today but selling is so far not decisive. Yen is trying to extend the rebound that started yesterday. But for now, New Zealand and Australian Dollars are stronger.

Technically, USD/CAD will continue to be a focus today as it’s pressing 1.3133 support. Break will resume larger fall from 1.4667 to long term fibonacci level at 1.3056, and likely a take on 1.3 handle too. EUR/GBP is another focus as break of 0.8944 support will be a sign of near term bearish reversal, and turn focus to 0.8864 support for confirmation. 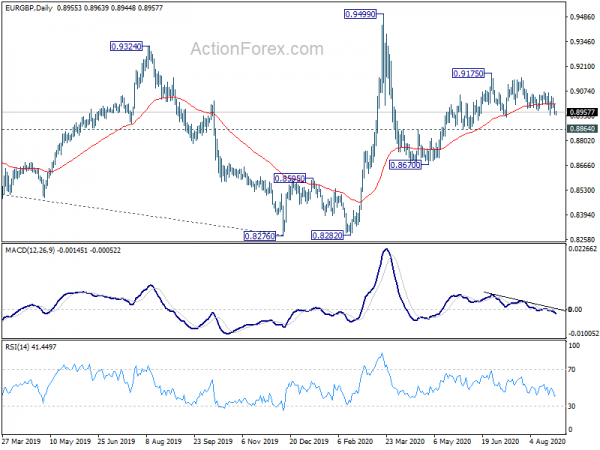 BoJ Suzuki: Monetary easing will last even longer due to pandemic

BoJ board member Hitoshi Suzuki said “with the economy having lost momentum to achieve our price target due to the pandemic, our monetary easing will last even longer”

He noted that the benefits of the central bank’s ultra-easing monetary policy still outweighs the costs. however, “If a second and third wave of infection hits Japan, financial institutions’ credit costs could balloon to levels near those hit after collapse of Lehman Brothers” during the 2008/09 global financial crisis.

Overall investments fell less than expected, inline with RBA’s view that the downturn was not as severe as originally anticipated. Q2 GDP contraction would likely be not as deep as thought too.

Ben Jones, CBI Principal Economist, said: “This quarter has shown some worrying falls in volumes, profitability and employment for the services sector. Although the pace of these declines is expected to ease, the impact of COVID-19 remains clear, with the services sector still facing challenges in terms of demand, revenues and cash flow… As we head into the autumn, the UK needs a bold plan to protect jobs as the job retention scheme draws to an end, to support the services sector.”

Major focus of the day will be Fed Chair Jerome Powell’s speech at the Jackson Hole symposium. Swiss will release GDP while Eurozone will release M3 money supply in European session. US will release jobless claims, pending home sales and Q2 GDP revision.

USD/CAD is staying in consolidation above 1.3133 and intraday bias remains neutral first. Near term outlook remains bearish for further decline with 1.3271 resistance intact. On the downside, break of 1.3133 will resume larger fall from 1.4667 to long term fibonacci level at 1.3056. On the upside, considering bullish convergence condition, firm break of 1.3271 should confirm short term bottoming. Intraday bias will be turned back to the upside for rebound to 55 day EMA (now at 1.3411). 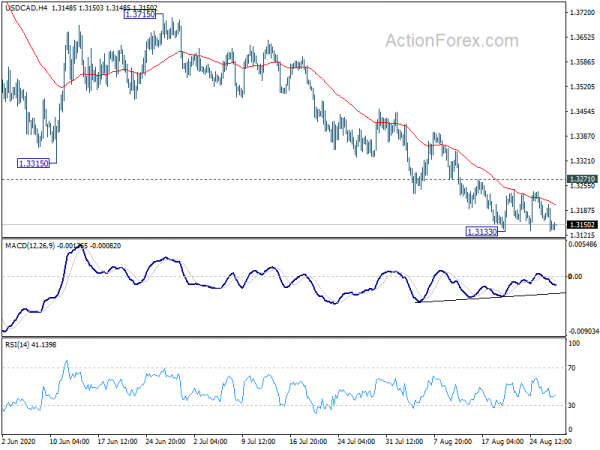 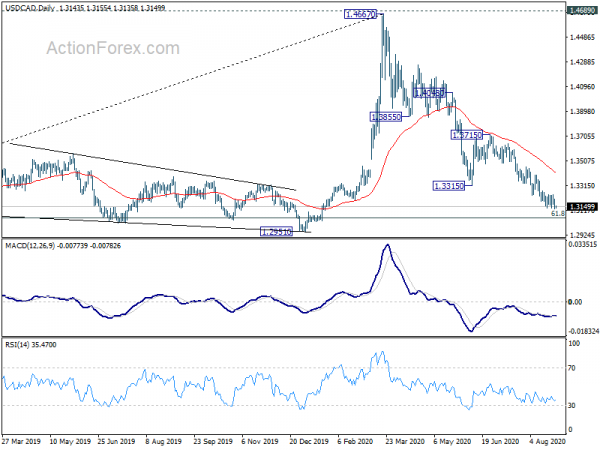