Investors seemed to have put last week’s selloff in stocks behind already. Asian markets, except Japan, trade generally higher following the rebound in the US overnight. Additional, upside surprises in data from China boost optimism that it’s back on track for stronger rebound for the rest of the year. In the currency markets, Australian Dollar is leading other commodity currencies higher today. Dollar is the worst performing one, followed by Yen.

Technically, though, most major pairs and crosses are still range bound. A focus is on whether Sterling could reverse from the current levels. But 1.3035 minor resistance in EUR/USD, 138.38 minor resistance in GBP/JPY and 0.9067 minor support in EUR/GBP need to be taken out first. Gold is another focus as it’s pressing an triangle trend line resistance. Break there could bring stronger rebound back to 2000 handle and above. 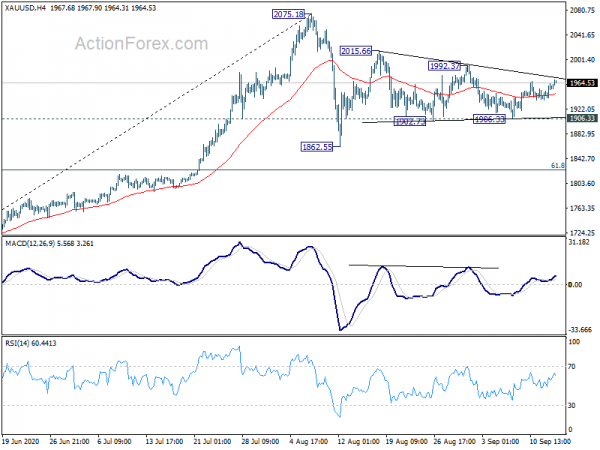 In the minutes of September meeting, RBA said the board agreed to “maintain highly accommodative settings as long as required”. A surprised addition in the language is that the central bank will “continue to consider how further monetary measures could support the recovery”. While it’s still early, the minutes indicated that RBA would be ready to ease further if circumstances warrant so.

Other than that, the minutes continued little new. The pandemic economic downturn “had not been as severe as earlier expected”/. Recovery, however, was “likely to be uneven”, with the outbreak in Victoria having a major effect. Uncertainty was “continuing to affect the spending plans of many households and businesses”. Wage and price pressures “remained subdued” and this was “likely to continue for some time”.

Yuan’s exchange rate appreciated on optimism that China’s economy is now on firm footing for further bounce back for the rest of the year. USD/CNH resumed the fall from 7.1961 and hits as low as 6.7825 so far. Outlook will stay bearish as long as 6.8600 resistance holds. The firm break of 38.2% retracement of 6.2354 to 7.9153 at 6.8286 now argues that whole rise from 6.2354 has completed already. Deeper fall would be seen to 61.8% retracement at 6.6021. Though, the reaction from Chinese stocks is so far mild. We’re prefer to see the SSE (now at around 3288) to break through the key resistance zone of 3500 to further confirm the underlying strength in sentiments. 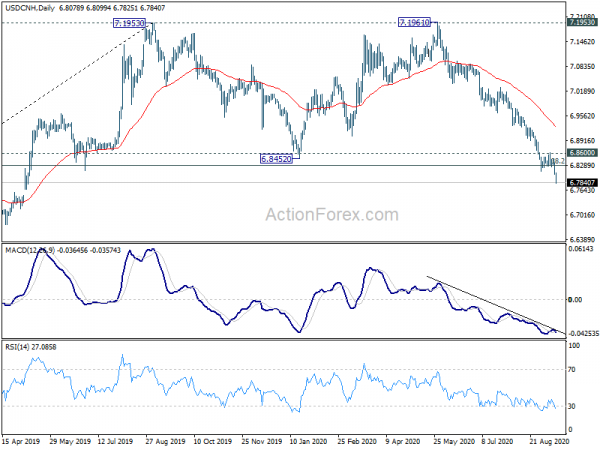 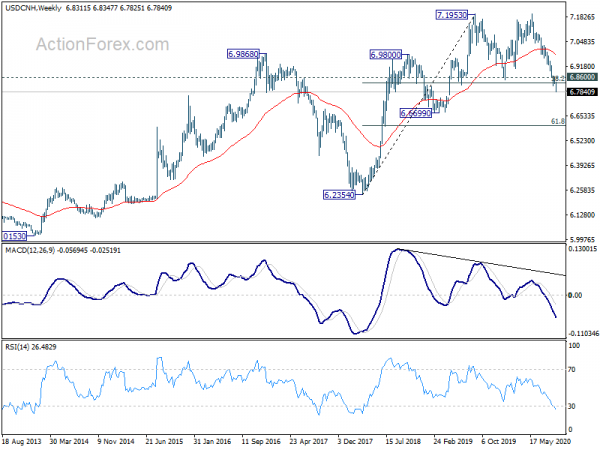 Germany ZEW economic sentiment will be the major focuses in Euroepan session. Swiss will release PPI. Later in the day, Canada will release manufacturing sales. US will release import price index and industrial production.

AUD/USD recovers further today but stays inside range below 0.7413. Intraday bias remains neutral for the moment. Further rise remains in favor with 0.7135 support intact. On the upside, break of 0.7413 will resume the rally from 0.5506 and target 0.7635 long term fibonacci level next. Nevertheless, decisive break of 0.7135 will confirm short term topping, and turn bias to the downside for deeper correction. 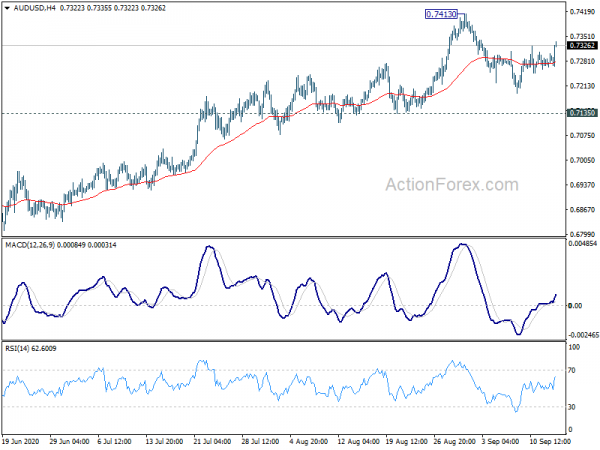 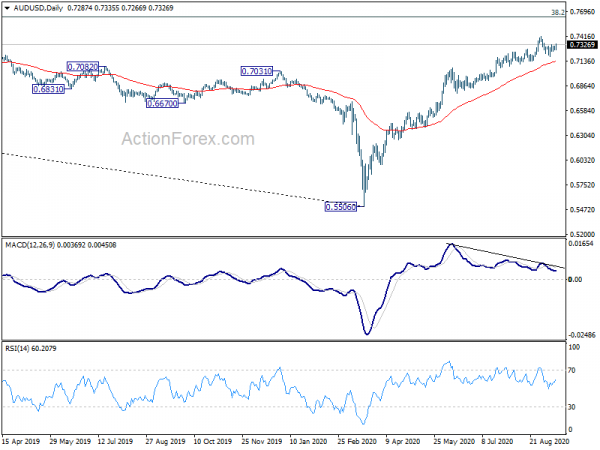