Yen rises broadly today as markets are awaiting Fed policy decision. The strength in Yen since last week seems to be related to inflation expectations. It first followed comments from an ECB official that the pandemic impact impact would eventually be demand dominate, and thus deflationary. Such view could be reflected in today’s Fed projections too. Thus, Yen somewhat decouples from risk sentiments for now and follows treasury yields lower. We’ll look at Yen’s reactions to FOMC later today and reassess. Staying in the currency markets, Sterling is actually the even stronger one, while Yen was only the second. Pull back in EUR/GBP is a factor helping the Pound. Dollar and Euro are the weakest. 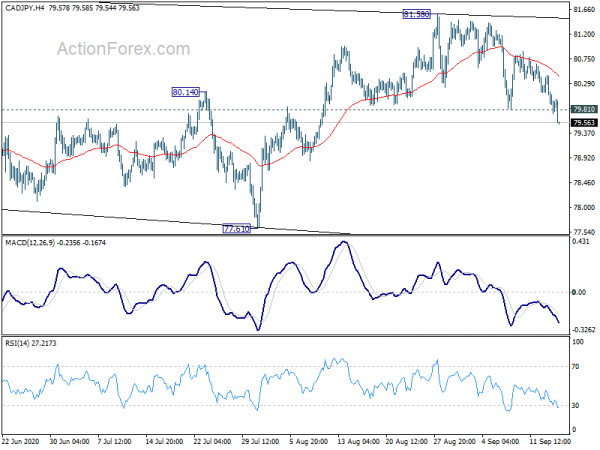 Eurozone trade surplus widened in Jul, but exports and imports dropped double-digit over the year

The signals are clear that Suga is going to continue with Abenomics and presses ahead with the reforms. Though, a new term “Suganomics” emerged as eventually, Suga is going to make his own marks, as least in some of the policy mix.

In non-seasonally adjusted term, Japan’s expected dropped -14.8% yoy to JPY 5232B in August. That’s the 8th straight month of double-digit decline, as well as the 21st month of contraction. It’s the worst run since the 23-month contraction through July 1987. Exports are generally expected to stay weak and might not reach pre-pandemic level until a least early 2022. Imports dropped -20.8% yoy to JPY 4984B. Trade surplus came in at JPY 248B.

Australia Westpac leading index rose to -2.56 in August, up from -4.42. Westpac said the improvement was broadly consistent with 1.8% growth in Q3, despite an expected -4% in the coronavirus center Victoria. That would also mean a “somewhat” moderated growth pace in Q4 at 2.2%. The combined second half growth would be 4%, more optimistic that RBA’s expectation of 1.3%.

Westpac also noted some market speculation surfaced after RBA minutes, for a rate cut from 0.25% to 0.1%. Such an option will “remain under considering but there appears to be no urgency”. RBA would indeed focus on supporting government bond markets first, including borrowing of state and territory governments.

OECD said: “After collapsing in the first half of the year, economic output recovered swiftly following the easing of measures to contain the COVID-19 pandemic and the initial re-opening of businesses. Policymakers reacted rapidly and massively to buffer the initial blow to incomes and jobs. But the pace of recovery has lost momentum over the summer. Restoring confidence will be crucial to how successfully economies can recover, and for this we need to learn to safely live with the virus.”

USD/JPY’s sharp decline today suggests that corrective rise from 104.18 has completed and larger fall from 111.71 is resuming. Intraday bias is back on the downside for retesting 104.18 first. Firm break there will confirm and target 61.8% projection of 109.85 to 104.18 from 106.94 at 103.43 next. On the downside, though, above 105.81 minor resistance will dampen this bearish view and turn intraday bias neutral again first. 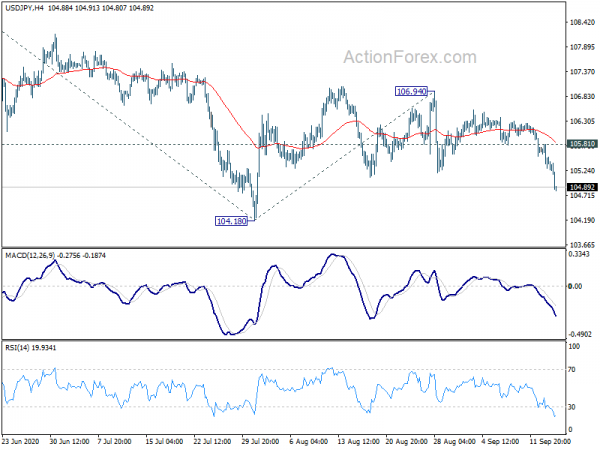 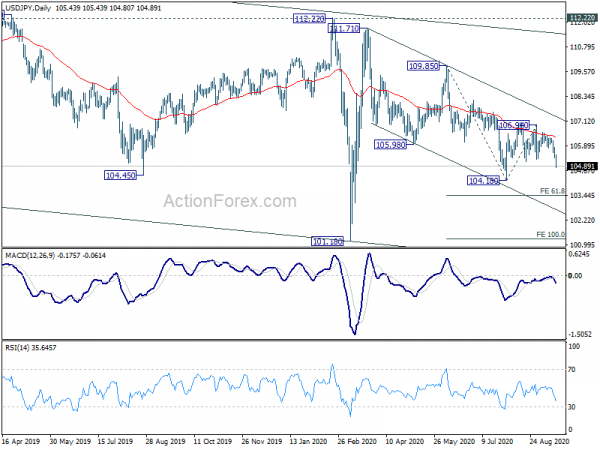