Commodity currencies surge broadly today on the back of strong risk appetite, especially in Japan. New Zealand Dollar is additionally boosted after the government asked RBNZ to considering surging house prices in monetary policy moves. Dollar tried to rebound overnight, with the help from downside breakout in Gold. The greenback then lost momentum in Asia, while Swiss Franc also weakens mildly.

Technically, Canadian Dollar could be a focus today, as risk-on markets also lift oil prices. 43.50 resistance is now in radar in WTI and decisive break there will resume larger rise from March’s spike low. That might help push USD/CAD through 1.3034 minor support for at least a test on 1.2928 low. While Kiwi was the star in Asia, Loonie might take the spotlight later in the day. 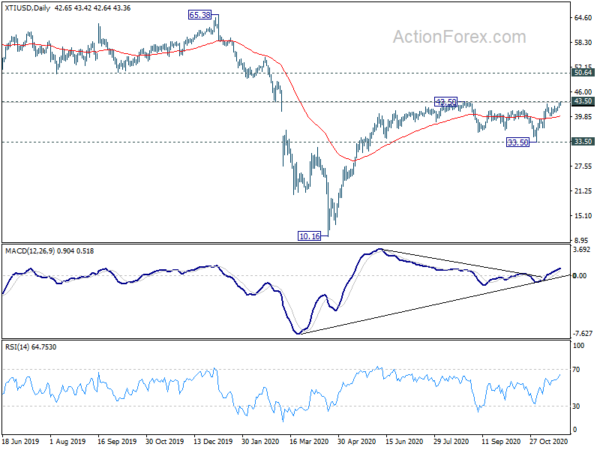 New Zealand Finance Minister Grant Robertson urged RBNZ to include house price stability as part of its broad monetary remit. The triggered speculations that the central bank would refrain from launching another round of massive stimulus, including negative interest rates.

In a letter to RBNZ Governor Adrian Orr, Robertson said he’s concerned with “recent rapid escalation in house prices, and forecasts for this to continue”. He’s also “concerned about the potential that these price increases may present a financial stability risk to the economy, particularly when monetary policy returns to more normal settings.”

“With an extended period of low interest rates, and some time before housing supply can catch up with demand, now is the time to consider how the Reserve Bank may contribute to a stable housing market,” he added. “Undertaking this work is not to suggest the Reserve Bank bears responsibility for house prices, but simply that it should have regard to something that is influenced by monetary policy.”

Orr said RBNZ will consider the government’s suggestion. At the same time “there are many long-term, structural issues at play.”

New Zealand Dollar surges broadly today as traders pare bet on RBNZ negative rates, after the government urged the central bank to take ” rapid escalation in house prices” into consideration. NZD/USD’s rally from 0.5469 continues and it’s on track to 61.8% projection of 0.5920 to 0.6797 from 0.6589 at 0.7131 next. IN any case, outlook will remain bullish as long as 0.6797 resistance turned support holds. 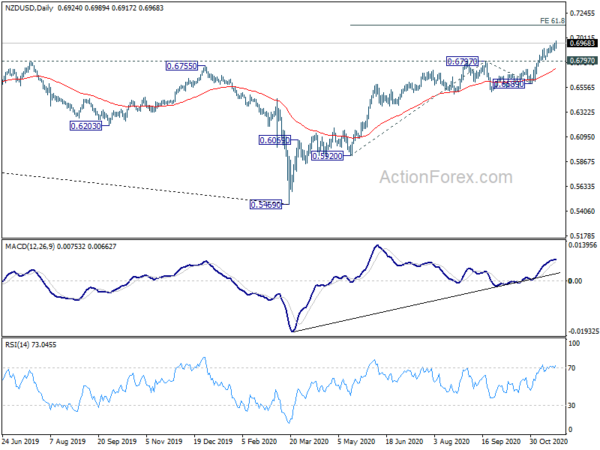 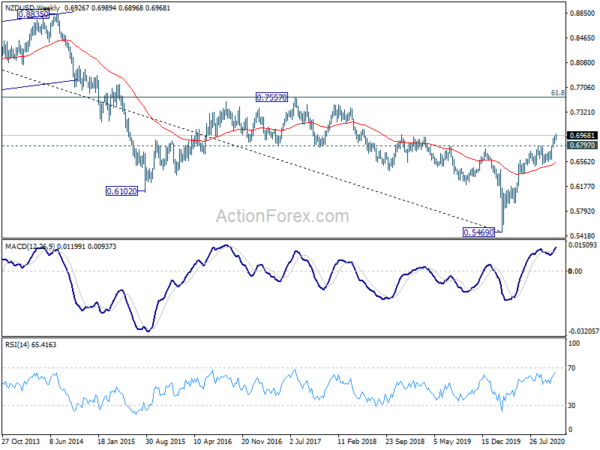 NZD/JPY is somewhat lagging NZD/UISD from medium term point of view. Nevertheless, as rise from 59.49 extends, decisive break of 73.53 structural resistance will carry larger bullish implications. NZD/JPY could target 61.8% retracement of 94.01 to 59.49 at 80.82 in medium term. 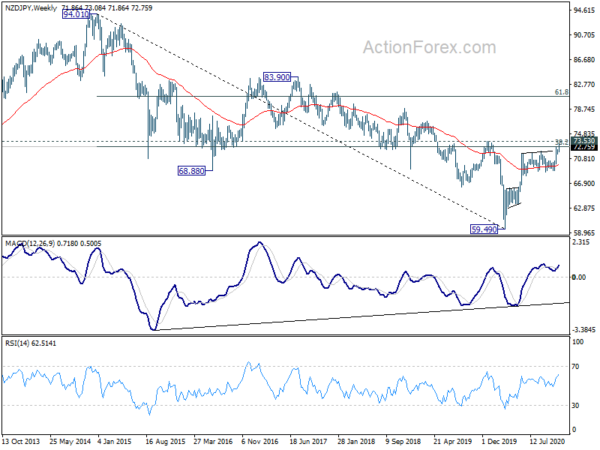 In a speech, RBA Deputy Governor Guy Debelle said the comprehensive package of measures implemented through this year “has materially lowered the structure of interest rates in the Australian financial system”. Additionally, “the decline in interest rates across the yield curve has lowered the exchange rate, relative to what it otherwise would be.”

He acknowledged that the news about vaccines “should help bolster that confidence”. But recovery will be “uneven”. “It is likely to be some time before the vaccines will be widely available and distributed.”

BoJ Governor Haruhiko Kuroda told the parliament that there is no need to “overhaul our projections” despite resurgence of coronavirus infections globally. The central bank forecasts the economy to contract -5.5% in the fiscal year ending March 2021, then expand 3.6% in the following year.

“Our view is that Japan isn’t heading toward deflation, though we’re watching developments in service consumption and capital expenditure carefully,” he added.

Kuroda also said, “there is no need now to review our policy framework. But there could be debate at an appropriate timing in the future.”

Fed Evans: No Rate hike probably even in 2024

Chicago Fed President Charles Evans said there is still “quite a long way to go” for the US economy to recovery from the pandemic crisis. He didn’t expect inflation to reach 2% targe4t until late 2022 or even 20223. Hence, “we are not expecting the funds rate to be raised before 2023 – probably late, maybe even 2024 in my opinion,” he said.

He also noted, “in the past the Fed has not put enough weight on valuing getting inflation to 2% and above”. Fed should get core inflation up to 2.5%, and, “I don’t think we should get involved in trying to fine-tune the overshoot…I would be surprised if we were to seek to increase interest rates sooner than 2023, given the objectives that we’ve laid out.”

Intraday bias in USD/CAD stays neutral and outlook is unchanged. Above 1.3172 will extend the rebound from 1.2928. But near term outlook will remain bearish as long as 1.3389 resistance holds. On the downside, break of 1.3034 minor support will bring retest of 1.2928 temporary low. Firm break there will resume larger down trend from 1.4667. 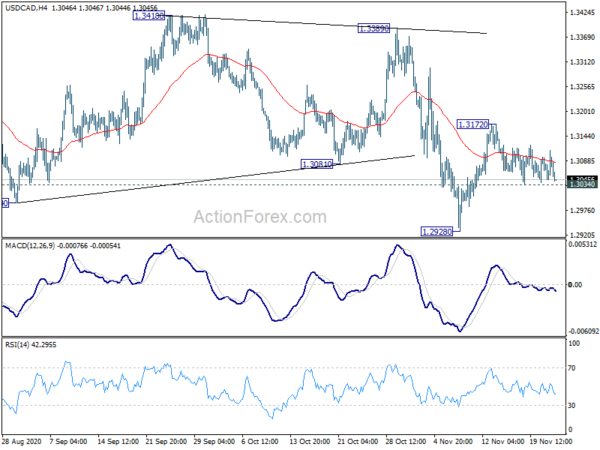 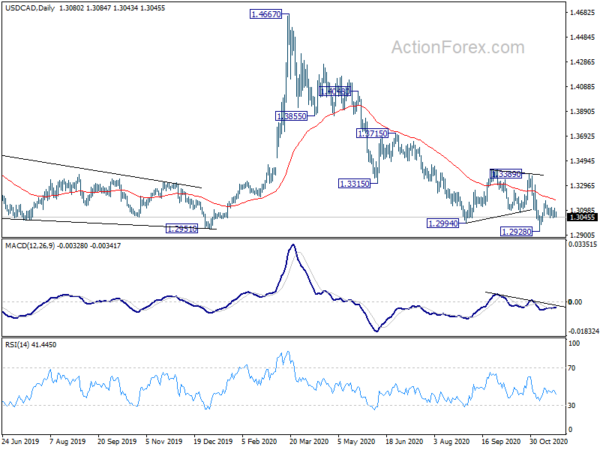