Swiss Franc is in deep selloff again today as risk sentiment further stabilized in the markets. European indices rebound broadly while US futures point to higher open. Global bond markets also turned mixed for now. Euro and Yen are following as next weakest. Meanwhile, Canadian Dollar is leading other commodity currencies higher. Dollar and Sterling are mixed for now.

Technically, EUR/AUD could be a focus with RBA rate decision featured in the upcoming Asian session. It’s so far bounded inside near term falling channel despite last week’s strong rebound. Break of 1.5487 minor support will suggest completion of the rebound and bring retest of 1.5250 low. 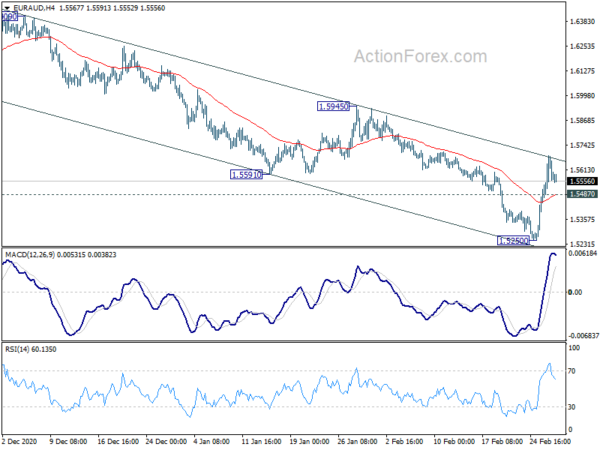 BIS: Central banks have to work out the implications of rising bond yields

The Bank for International Settlements said, with the release of its quarterly review, that “prospects of a more robust economic recovery buoyed risky asset prices, with signs of exuberance reflected in the behaviour of retail investors.” And, “sovereign yield curves steepened as investors priced in higher inflation and fiscal support.” Also, “sentiment towards emerging market assets remained favourable, in particular in East Asia.”

“The recent market jitters confirm that the back-up in bond yields and reflation trade are casting the financial market outlook in a completely new light,” said Claudio Borio, Head of the BIS’ Monetary and Economic Department. “People just saw low rates for as far as the eye could see, whereas now they have started having doubts about how long these conditions would last.”

Central banks “will have to work out what the implications of that (rising bond yields) for their objectives and respond accordingly,” Borio added.

Eurozone PMI Manufacturing was finalized at 57.9 in February, up from January’s 54.8. Markit said output and new orders were up sharply as export trade strengthens. But acute lengthening of delivery times drove fastest cost inflation in nearly a decade.

Chris Williamson, Chief Business Economist at IHS Markit said: “Manufacturing is appearing as an increasingly bright spot in the eurozone’s economy so far this year. The PMI has reached a three-year high to run at a level that has rarely been exceeded in more than two-decades of survey history – notably during the dot-com bubble, the initial rebound from the global financial crisis and in 2017-18…

“The growth spurt has brought its own problems, however, with demand for inputs not yet being met by supply. Shipping delays and shortages of materials are being widely reported, and led to near record supply chain delays. Prices paid for inputs are consequently rising at the fastest rate for nearly a decade, hinting at further increases in consumer price inflation in coming months, at least until supply and demand come back into balance.”

UK PMI Manufacturing was finalized at 55.1 in February, up from January’s 54.1. Markit noted growth was subdued by stretched supply chains and rising costs. But Business optimism rose to near six-and-a-half year high.

“In fact the biggest contributor to the headline PMI reading was a near-record lengthening of supplier delivery times. However, while normally a positive sign of an increasingly busy economy, the recent lengthening was far from welcome, more often than not linked to problems resulting from Brexit and COVID related. The resultant shortages for a vast array of components and raw materials, as rising demand chased restricted supply, led to a further acceleration in input cost inflation to a four-year high.

“With current constraints likely to continue for the foreseeable future, pressure on prices and output volumes may remain a feature during the coming months. That said, improved domestic demand as lockdown restrictions ease and a further rise in manufacturers’ optimism are reasons to hope brighter times are on the horizon, and have already supported a modest rebound in staffing levels since the turn of the year.”

China Caixin PMI Manufacturing dropped to 50.9 in February down from 51.5, missed expectation of 51.5. That’s also the worst reading since last May. Output expanded modestly amid notably softer rise in new work. Pandemic weighed on exports sales and supplier performance. Though, business confidence improved on hopes of global economic recovery in months ahead.

Wang Zhe, Senior Economist at Caixin Insight Group said: “To sum up, the momentum of the manufacturing recovery further weakened as the supply and demand both rose at a slower clip, adding pressure on employment. The prices of raw materials continued to increase and inflationary pressure continued to grow. Despite the headwinds mentioned above, manufacturers became more optimistic about the outlook for their businesses.”

Japan PMI Manufacturing rose to 51.4 in February, up from 49.8. That’s the strongest reading since December 2018, as manufacturers gradually recovered from the impact of the pandemic. Markit also noted that output and new orders expanded modestly. Input prices rose at fastest pace for two years. Positive sentiments reached strongest since July 2017.

Usamah Bhatti, Economist at IHS Markit, said: “Concern has been building throughout the Japanese manufacturing sector regarding ongoing supply chain disruption, which has induced sharp rises in the prices of raw materials. Cost burdens faced by firms rose at the sharpest pace in two years… Japanese manufacturers continued to report a positive outlook beyond the immediate future… in line with the IHS Markit forecast for industrial production to grow 7.4% in 2021, although this is from a low base.”

Ai Group Chief Executive Innes Willox said: “Australia’s manufacturers lifted production and employment in February as sales recovered a large share of the ground lost in 2020. Growth was distributed broadly across manufacturing… Manufacturers are generally positive about the outlook for the next few months with new orders coming in at a greater pace as restrictions on activity and cross-border travel are hopefully wound back. 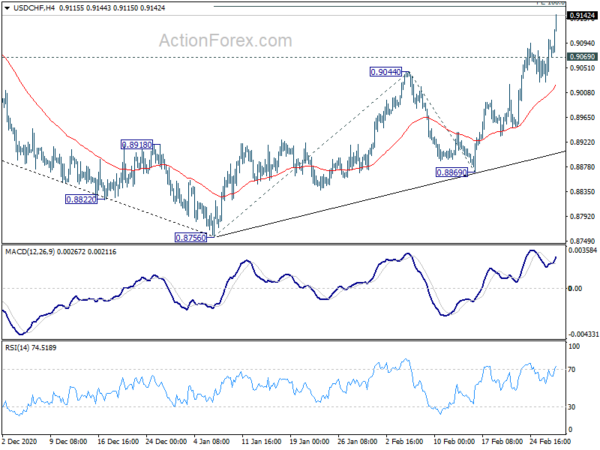 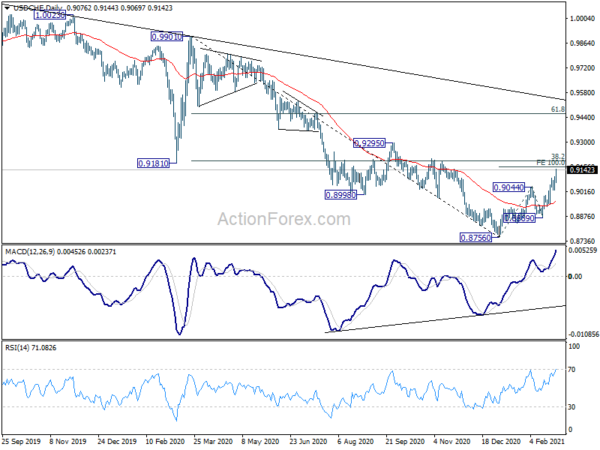