Selloff in Swiss Franc and Yen is the main focus today. But the forex markets are mixed elsewhere. Commodity currencies are mildly firmer as led by Aussie, but major pairs are just bounded in very tight range at the time of writing. Euro, Sterling and Dollar are mixed for the moment. But the picture could be changed drastically in the US session. Renewed selloff in US stocks could prompt some downside acceleration. Meanwhile, Fed Chair Jerome Powell’s comments on recent developments in yields would be scrutinized.

Technically, Canadian Dollar would worth a watch as WTI appears to have defended 58.57 near term support well. Sustained break of 85.08 temporary top in CAD/JPY would confirm up trend resumption. But break of 84.42 minor support will extend the consolidation from 85.08 with another falling leg. EUR/CAD is also under pressure again and sustained break of 1.5208 would finally confirm resumption of fall from 1.5783. 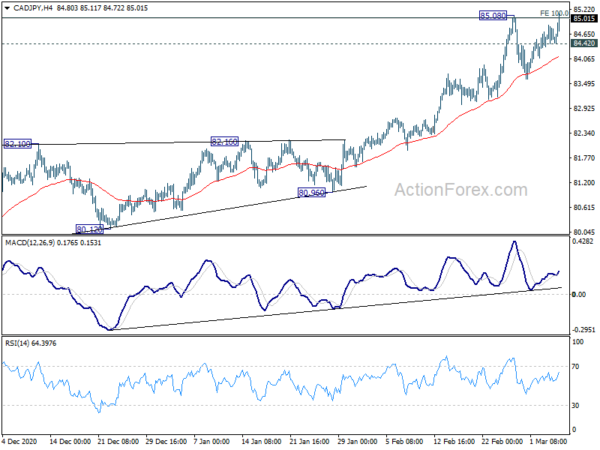 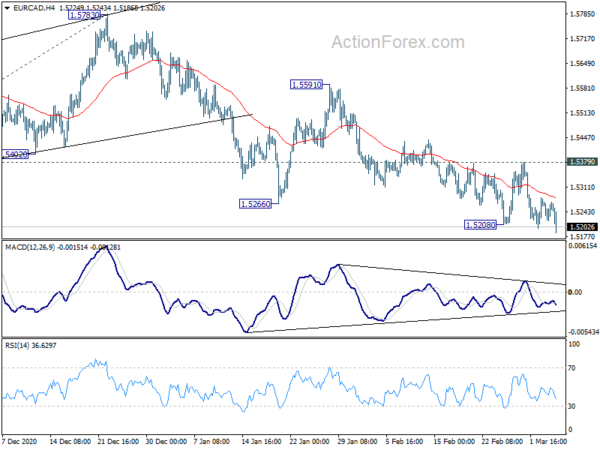 US initial jobless claims rose to 745k, slightly below expectations

Eurozone retail sales dropped sharply by -5.9% mom in January, worse than expectation of -1.1% mom. Volume of retail trade decreased by -12.0% mom for non-food products and by -1.1% mom for automotive fuels, while it increased by 1.1% mom for food, drinks and tobacco.

Eurozone unemployment rate was unchanged at 8.1% in January, better than expectation of 8.3%. 13.282 million people in the Eurozone were unemployed, up 8000 from December.

UK PMI Construction rose to 53.3 in February, up from 49.2, above expectation of 51.5. Markit said the recovery in total output restarted during the month. Increase in commercial activity helped offset housing slowdown. However, there was fastest rise in cost burdens for more than 12 years.

Tim Moore, Economics Director at IHS Markit: “Construction work regained its position as the fastest growing major category of UK private sector output in February. The rebound was supported by the largest rise in commercial development activity since last September as the successful vaccine rollout spurred contract awards on projects that had been delayed at an earlier stage of the pandemic….

“Stretched supply chains and sharply rising transport costs were the main areas of concern for construction companies in February. Reports of delivery delays remain more widespread than at any time in the 20 years prior to the pandemic, reflecting a mixture of strong global demand for raw materials and shortages of international shipping availability. Subsequently, an imbalance of demand and supply contributed to the fastest increase in purchasing costs across the construction sector since August 2008.”

Australia retail sales rose 0.5% mom in January, slightly below expectation of 0.6% mom. Comparing to a year ago, sales turnover rose 10.6% yoy. All state and territories reported growth, except Queensland with -1.5% mom decline. Western Australia reported strongest sales growth by 2.1% mom, followed by Victoria and Tasmania at 1.0%.

RBNZ Orr: We will not be resuming business as previous in its entirety any time soon

RBNZ Governor Adrian Orr said in a speech, the current pic up in economic activity is “sector and event specific”, and “we will not be ‘resuming business as previous’ in its entirety any time soon”.

While the initiation of global vaccination program is positive, “there remains a significant period before widespread immunity is achieved”. In the meantime, “economic uncertainty will remain heightened and international mobility restrictions will continue”. 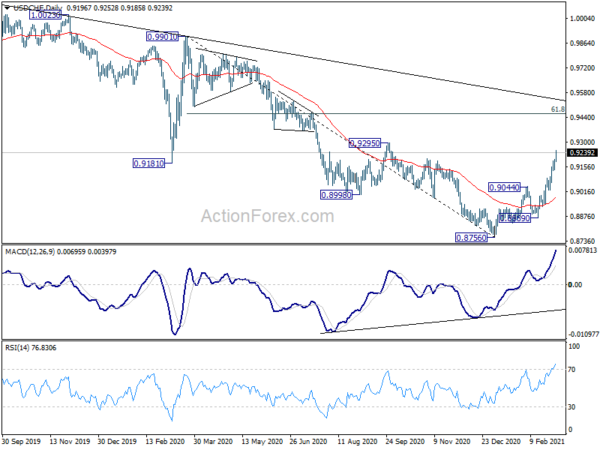