Some renewed concerns over global spread of coronavirus appears to be putting risk-on rally to a halt. In Japan, Tokyo Governor is seeking the government o declare a state of emergence to curb the infections ahead of the Olympics that just three months away. Situation in some countries like India remains severe. European Commissions said that at least 12 member states are confidence to vaccinate 70% of their adult population by mid-July. But that was largely shrugged off by the markets.

Dollar recovers mildly as risk sentiments stabilized, but it’s still one of the weakest for the week, together with Canadian. Sterling attempted to extend rally but loses some upside momentum with Euro. Meanwhile, Yen is currently the worst performing one for today, but it has already pared back some of earlier losses. The forex might turn into brief consolidative mode first.

Technically, one focus now is whether USD/JPY could extend current recovery through 108.99 resistance. Break of this resistance will argue that recent pull back from 110.95 has completed. That might help cushion Dollar’s declines elsewhere. 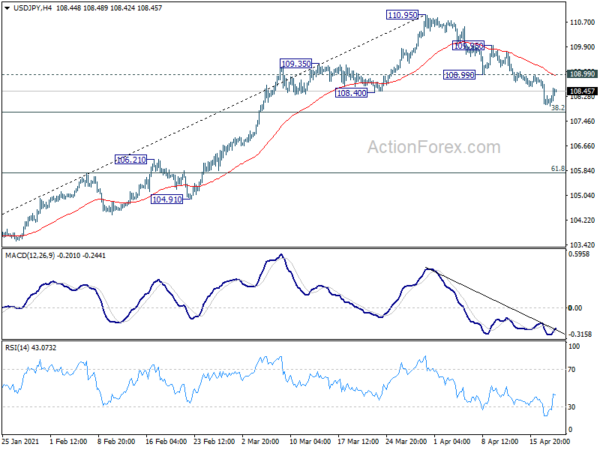 In the minutes of April 6 meeting, RBA said economic recovery was “expected to continue”, with “above-trend” growth forecast in 2021 and 2022. But an important near-term issue was “how households and businesses would adjust to the tapering of several fiscal support measures”. There might be a “temporary pause” in the pace of labor market improvements.

It also reiterated that “wage and price pressures had remained subdued and were expected to remain so for several years”. It would “take some time” to reduce the spare capacity to generate wage growth that’s consistent with the inflation target. Annual CPI was expected to rise “temporarily” to around 3% in the middle of the year on “reversal of some pandemic-related price reductions”. But underlying terms inflation was expected to “remain below 2 per cent over both 2021 and 2022.”

Overall, RBA maintained target for cash rate and 3 year AGS yield at 0.10%, as well ass the settings for Term Funding Facility and government bonds purchases. The board does not expect the conditions for raising interest rates to be met “until 2024 at the earliest”.

BoJ Kuroda: We’re not at a stage to debate ETF exit

BoJ Governor Haruhiko Kuroda said that it’s too early to consider exit from ETF purchases. “When we are to unload our ETF holdings, we will set guidelines on how to do this at a policy-setting meeting,” Kuroda told parliament. “But we’re not at a stage now to debate an exit.”

Separately, it’s reported that BoJ is considering to downgrade inflation forecasts for the current fiscal year. The central bank expected core consumer prices to be at 0.5% this fiscal year. But cuts in mobile phone charges could push core inflation by around -0.2%. BoJ will release updated quarterly forecasts at its policy meeting on April 26-27.

EUR/USD’s rise from 1.1703 is still in progress and intraday bias stays on the upside. Correction from 1.2348 should have completed with three waves down to 1.1703. Further rise should be seen to 1.2442/2348 resistance zone. For now, further rally will remain in favor as long as 1.1941 support holds, in case of retreat. 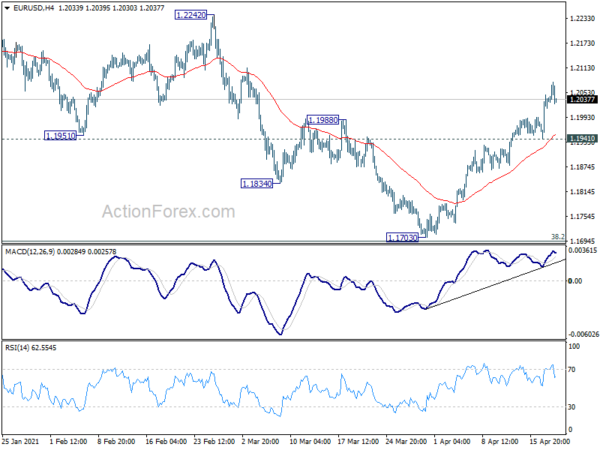 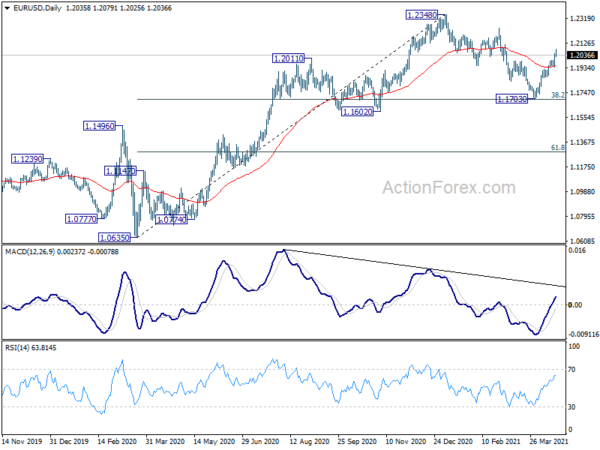