Canadian Dollar jumps broadly today, following upside breakout in oil price, and partly supported by solid GDP growth data. Australian Dollar is following as the second strongest, while Dollar is also rebounding. On the other hand, Sterling reversed earlier rallies after failing to sustain above a key resistance against Dollar. Subsequent selloff sends the Pound as the weakest today, followed by Kiwi.

Technically, WTI crude oil’s break of 67.83 resistance confirms up trend resumption. Near term bullishness is affirmed by strong support from rising 55 day EMA. Next target is 70 psychological level, and then 76.75 long term resistance. CAD/JPY is also on track to key resistance zone at 91.62, 61.8% projection of 77.91 to 88.28 from 85.40 at 91.80. We’d see if CAD/JPY would top around there, or strength in oil prices would push it through this key resistance zone. 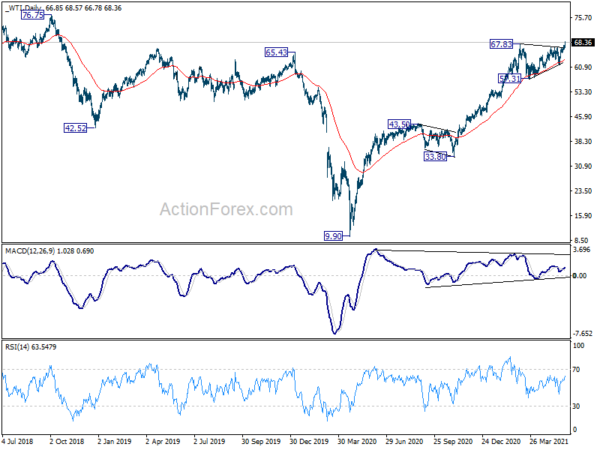 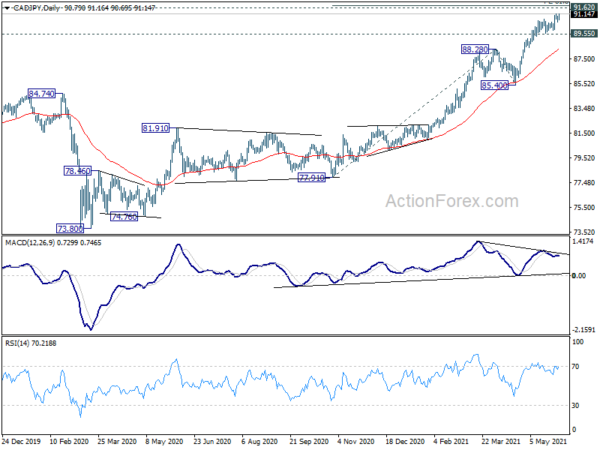 Canada GDP grew 1.1% mom in March, above expectation of 1.0% mom. That’s the 11th consecutive monthly increase. Total economic activity was around -1% below the pre-pandemic level in February 2020.

Based on preliminary information, GDP has declined around -0.8% mom in April, the first fall since April 2020.

Eurozone CPI rose to 2% in May, unemployment rate dropped to 8% in Apr

Eurozone PMI Manufacturing was finalized at 63.1 in May, up from April’s 62.9. Rises in output and new orders were slightly softer, but growth rates remained considerable. Record deterioration in vendor delivery times drove intensification of inflationary pressures.

Chris Williamson, Chief Business Economist at IHS Markit said: “Eurozone manufacturing continues to grow at a rate unprecedented in almost 24 years of survey history, the PMI breaking new records for a third month in a row. Surging output growth adds to signs that the economy is rebounding strongly in the second quarter. However, May also saw record supply delays, which are constraining output growth and leaving firms unable to meet demand to a degree not previously witnessed by the survey.”

France PMI Manufacturing was finalized at 59.4 in May, up from April’s 58.0. That’s was also the highest level since September 2000. Both output and new orders rose at sharpest rates since January 2018. Accumulation of backlogs was steepest since November 2006. Rise in selling prices was near-record amid further acceleration of cost inflation.

UK PMI manufacturing finalized at 65.6, growth boosted by unlocking from restrictions and vaccinations

Rob Dobson, Director at IHS Markit, said: “The UK PMI surged to an unprecedented high in May, as record growth of new orders and employment supported one of the steepest increases in production volumes in the near 30-year survey history. Growth is being boosted by the unlocking of economies from COVID restrictions and ongoing vaccination programs. This is being felt across the globe, as highlighted by a record rise in new export business during the latest survey month.

Swiss National Bank, Vice Chairman Fritz Zurbruegg, said in a Corriere del Ticino interview that, “we believe the franc is still high.” “If we look at inflation, it is still very low and GDP is not yet at the pre-crisis levels,” he said. “That is why we are convinced that our expansionary monetary policy remains appropriate.”

“We have to bear in mind that in a small and open country like ours, the exchange rate has a major impact on both inflation and economic growth,” he said. “For this reason, it is important to maintain the instrument of foreign exchange interventions alongside the classic interest rate instrument.”

“Without this expansionary policy, we would have a much stronger franc, lower growth and inflation and higher unemployment,” he said. “So the average Swiss citizen is better off thanks to our policy.”

GDP dropped -0.5% qoq in Q1. FSO said: “Value added dropped significantly in the service sector following the tightening of measures de-signed to contain the coronavirus pandemic. Private consumption also contracted sharply. By contrast, industry grew markedly and prevented a greater decline in GDP. There was no repeat of the economic slump experienced in spring 2020.”

RBA left monetary policy unchanged as widely expected. Cash rate target and 3-year AGB yield target are both kept at 0.10%. Parameters of asset purchases are kept unchanged too. It maintained the pledge to keep “highly supportive monetary conditions” to support return to full employment and inflation consistent with target. Also, the conditions for rate hike are unlikely to be matched “until 2024 at the earliest.

The central bank said economic recovery is “stronger than earlier expected and is forecast to continue”. The central scenario is for GDP to grow 4.75% this year and 3.50% next. Progress in reducing unemployment “has been faster than expected”. Further decline is unemployment rate to 5% by year end is expected. Inflation and wage pressures are “subdued”.

At the July meeting, RBA will consider whether to move the target bond for the 3-year yield target to November 2024 bond. It will also decide then whether to extend the government bond purchase program after September.

Australia AiG Performance of Manufacturing rose 0.1 pt to 61.8 in May. That’s the eighth consecutive month of recovery for the MI, and the highest result since March 2018. It’s also the fourth highest reading on record. Six of seven activity indicators expanded, while only the exports active index indicated a contraction.

Ai Group Chief Executive Innes Willox said: “Australia’s manufacturing sector maintained its rapid pace of expansion in May fuelled by strong demand from the construction sector, a pick-up in business investment and healthy demand from households…While the new Victorian lockdown will dampen enthusiasm somewhat, these conditions are likely to be setting the stage for a lift in investment by manufacturers.”

Japan PMI Manufacturing was finalized at 53.0 in May, down from April’s 53.6. That signaled a softer but still moderate improvement in the health of the sector. There were further expansions in output and new orders, and second successive rise in employment levels. Positive sentiment remained elevated.

Usamah Bhatti, Economist at IHS Markit, said: “May data marked a sustained improvement in the health of the Japanese manufacturing sector, as the latest Manufacturing PMI painted a different picture to 12 months ago. A continued recovery from pandemic-related disruption has now extended to four months…. Japanese goods producers remained optimistic in the year ahead outlook for activity. Firms were hopeful that the pandemic would subside and induce a broad recovery in demand across the sector. IHS Markit estimates that industrial production will rise by 8.8% in 2021.”

Wang Zhe, Senior Economist at Caixin Insight Group said: “To sum up, manufacturing expanded in May as the post-epidemic economic recovery kept its momentum. Both domestic and overseas demand were strong and supply recovered steadily. The job market remained stable. Manufacturers stayed confident about the business outlook as the gauge for future output expectations was higher than the long-term average. Inflation was still a crucial concern as prices continued rising.” 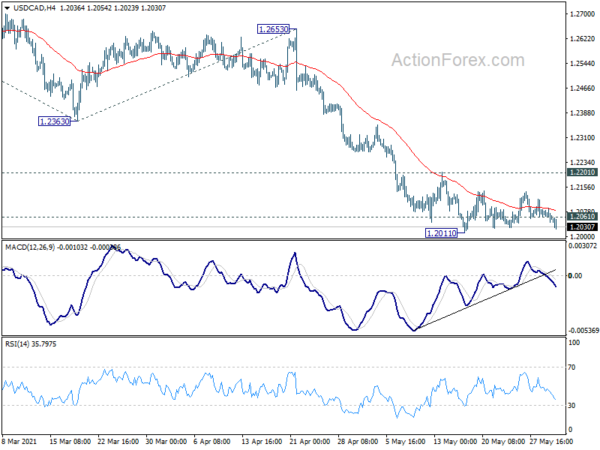 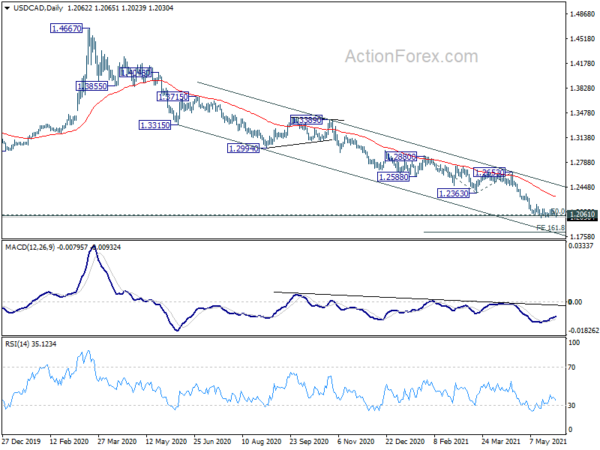