Dollar’s post-FOMC strength continues to overwhelm the markets today. Though, Yen is also catching up as US futures point to a weak open. Selling in commodity Yen crosses is also helping the Japanese currency. Swiss Franc is currently the worst performing, as SNB sounded it’s fully in inertia despite better growth and inflation outlook. Kiwi and Aussie are the worst performing, but Euro and Sterling are not too far away.

Technically, Dollar strength should be cleared with EUR/USD’s firm break of 1.2 handle. The question now is, when the greenback would continue to lead the Yen. Or, Yen would eventually overtake as risk aversion intensifies. USD/JPY is now facing 110.95 resistance. Decisive break there will resume larger rise from 102.58 and solidify Dollar’s place as winner. Rejection by 110.95, followed by break of 109.79 support, however, would suggests that USD/JPY is extending the consolidation form 110.95 with another fall. That would be a signal of deeper selloff in Yen crosses on risk aversion.

Also released, Philly Fed manufacturing index dropped to 30.7 in June, down from 31.5, above expectation of 30.1.

SNB kept policy rate and interest on sight deposits at -0.75% as widely expected. It remains “willing to intervene in the foreign exchange market as necessary”. It reiterated that the Swiss franc is “highly valued”. The “expansionary monetary policy provides favourable financing conditions, contributes to an appropriate supply of credit and liquidity to the economy, and counters upward pressure on the Swiss franc.”

Also from Swiss, trade surplus widened to CHF 4.95B in May, above expectation of CHF 4.23B.

ECB Lane: From September there’s going to be a lot of things happening

“We know from September there’s going to be a lot of things happening,” he added. “It’s not a turn on a dime situation where we’re going to know everything at a point in time, but of course we’ll know a lot more over the summer.”

“Going back to September, we will have new forecasts, but remember we have a very strong forecast for quarter three, but quarter three is not over until the end of September,” he added. “We’re not necessarily going to have every piece of hard data you want to have going into the September meeting.”

Australia employment grew 115.2k in May, unemployment drop to pre-pandemic 5.1%

“After an easing of economic activity in the December quarter, we’ve seen broad-based growth in the first quarter of 2021. This is despite Auckland being in alert level 3 lockdown for 10 days, and continued border restrictions,” national accounts senior manager Paul Pascoe said.

Gold’s decline accelerates on broad based Dollar strength, and it’s now pressing 1800 handle. The strong break of 55 day EMA dampens our original bullish view. That is, rise from 1676.65 and fall from 1916.30 might both be legs of the consolidation pattern from 2075.18 only, which is still unfolding. 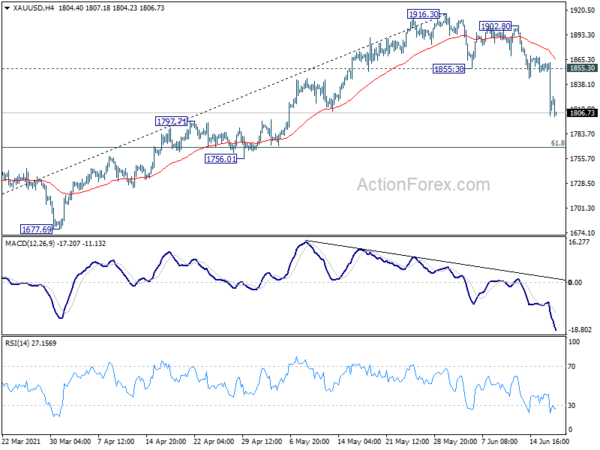 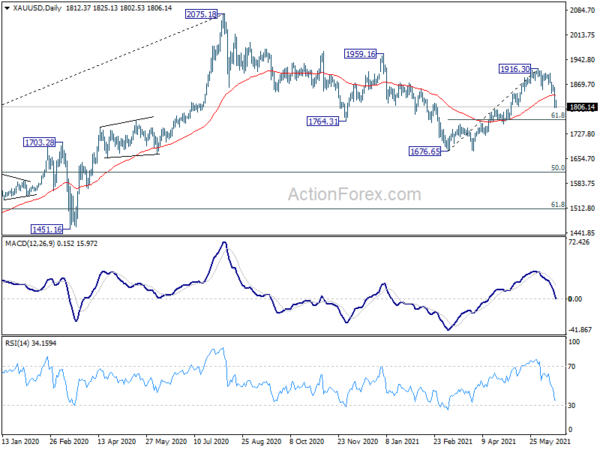 Intraday bias in USD/JPY remains on the upside with focus on 110.95 high. Decisive break there will resume larger up trend from 102.58 to 111.71 key resistance next. However, break of 109.79 support will suggest rejection by 110.95. Intraday bias will be turned back to the downside for 109.17 support. Break there will extend the consolidation pattern from 110.95 with another falling leg, targeting 107.47 support again. 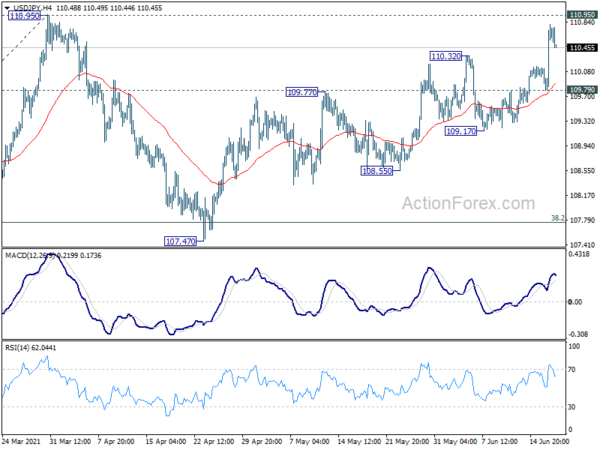 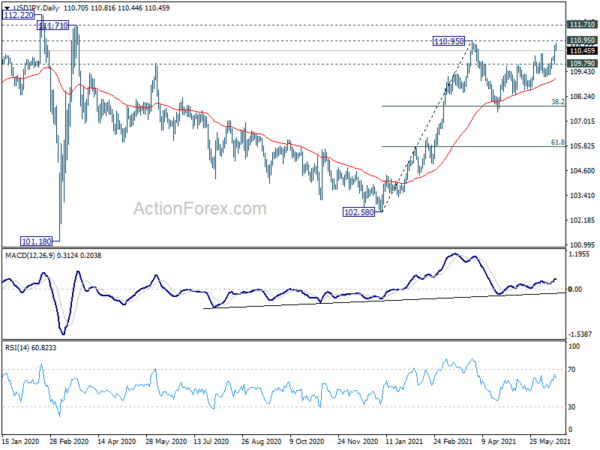