New Zealand Dollar is the star winner in Asian session today on RBNZ rate speculations. The Kiwi has taken Aussie higher today, but the latter lost some steam after unsurprising RBA policy decision. Though, Aussie is still maintaining most of gains, together with Sterling. On the other hand, Dollar, Yen and Euro are the weakest ones.

Technically, EUR/AUD’s break of 1.5699 support is the first sign of near term bearish reversal. Deeper fall could be seen back to 1.5418 support next. The question is whether that would be accompanied by break of 0.7615 resistance in AUD/USD to indicate Aussie strength. Or break of 0.8529 support in EUR/GBP to indicate Euro weakness. We’ll see.

RBA moves to AUD 4B per week bond purchase, until at least mid-Nov

RBA decided to keep cash rate target at 0.10% as widely expected. The central bank will continue with bond purchase program after the current one ends in September. But the purchase target will be changed to AUD 4B per week, until at least mid-November. April 2024 bond is kept as the bond for yield target at 0.10%.

The central bank said the expectation that condition for rate hike “will not be met before 2024”. This could be seen as slightly more optimism than “this is unlikely to be until 2024 at the earliest.” Still, “meeting it will require the labour market to be tight enough to generate wages growth that is materially higher than it is currently.”

New Zealand Dollar jumps broadly today as economists pull head their expectation on RBNZ rate hike. The change in forecasts came after strong NZIER Quarterly Survey of Business Opinion, which shows a sharp improvement in both business confidence and demand in firms’ own business.

ASB Bank now predicts a rate hike from historical low at 0.25% in November. BNZ quickly followed in expecting a hike this November. Markets are indeed now pricing in 70% chance of that happening.

NZD/JPY’s break of 78.46 resistance now suggests that rebound from 76.20 is resuming. Further rise should be seen as long as 77.74 support holds, to retest 80.17 high. At this point, we’re not expecting a firm break of 80.17 to resume the up trend from 59.49 low yet. Consolidation pattern from 80.17 could still extend with another falling leg. We’ll keep an eye on the upside momentum to assess it again later. 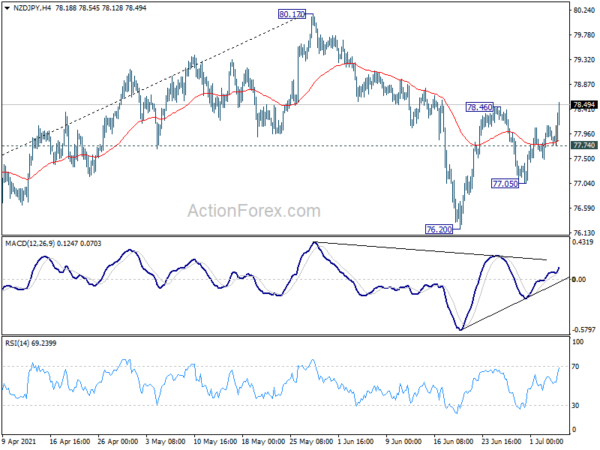 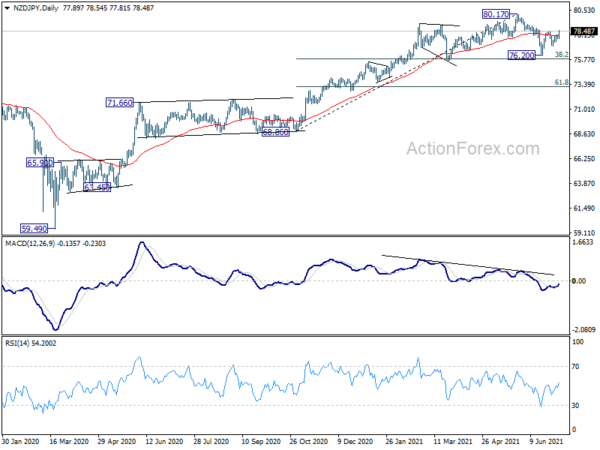 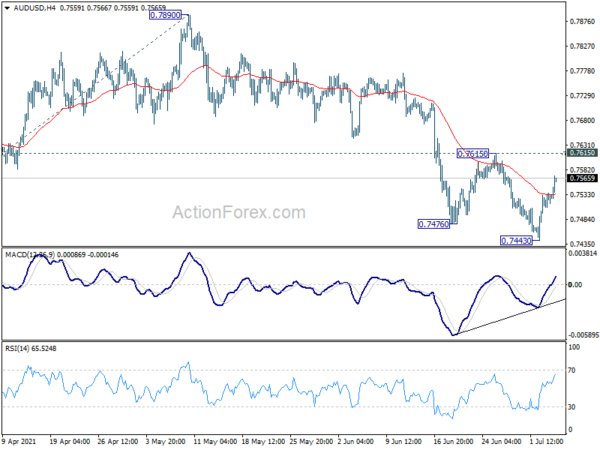 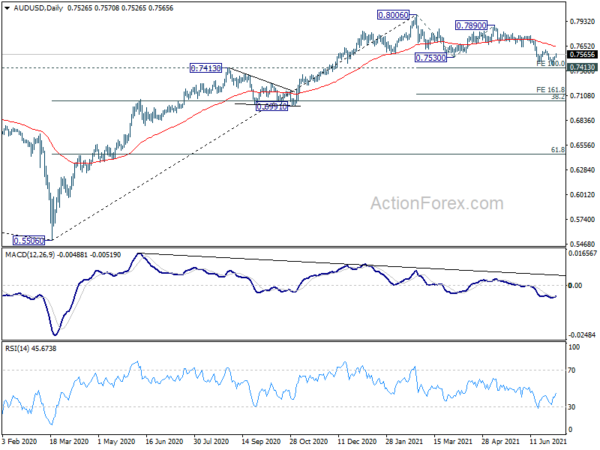