Markets Staying in Consolidations, Dollar to End the Week as Worst Performer

The forex markets are staying in consolidative mode today and could remain so before weekly close. Though, that would depend on whether US stocks would surge again with powerful buying. For the week, Dollar is currently the worst performing, followed by Canadian and Euro. Aussie is the strongest followed by Kiwi.

Technically, the retreats in Yen pairs are so far very shallow. We’d continue to monitor if 132.13 and 156.58 minor support levels in EUR/JPY and GBP/JPY would be broken. Or, near term up trend in Yen crosses would resume with help from stock and overall risk-on sentiments.

Canada retail sales rose 2.1% mom to CAD 57.2B in August, slightly above expectation of 2.0% mom. The gain was led by higher sales at food and beverage stores (+4.8%), gasoline stations (+3.8%), and clothing and clothing accessories stores (+3.9%). Sales increased in 9 of 11 subsectors. Based on preliminary data, sales has decreased -1.9% mom in September.

Chris Williamson, Chief Business Economist at IHS Markit, said: “The UK economy picked up speed again in October, but the expansion is looking increasingly dependent on the service sector, which in turn looks prone to a slowdown amid the recent rise in COVID-19 cases. Growth is also being accompanied by an unprecedented rise in inflationary pressures, which will inevitably feed through into higher consumer prices in coming months.

“The news comes at a time when the Bank of England is already leaning towards hiking interest rates to safeguard against inflationary expectations becoming entrenched. The record readings of the PMI survey’s price gauges will inevitably pour further fuel on these inflation worries and add to the case for higher interest rates.

ONS also noted: “Despite relaxation of COVID-19 restrictions in summer 2021, in-store retail sales remain subdued; the proportion of retail sales online rose to 28.1% in September 2021 from 27.9% in August, substantially higher than the 19.7% in February 2020 before the pandemic.”

Eurozone PMI composite dropped to 54.7, growth much weaker in Q4

Chris Williamson, Chief Business Economist at IHS Markit said: “A sharp slowdown in October means the eurozone starts the fourth quarter with the weakest growth momentum since April… The ongoing pandemic means supply chain delays remain a major concern, constraining production and driving prices ever higher, both in manufacturing and in the services sector. Average selling prices for goods and services are rising at a rate unprecedented in over two decades, which will inevitably feed through to higher consumer prices in the coming months.

“While the overall rate of economic growth remains above the long-run average for now, risks seem tilted to the downside for the near-term as the pandemic continues to disrupt economies and push prices higher. After strong second and third quarter expansions, GDP growth is looking much weaker by comparison in the fourth quarter.”

Phil Smith, Associate Director at IHS Markit said: “October’s flash PMI data point to economic activity in Germany beginning to plateau at the start of the fourth quarter. Growth has slowed to a modest pace, with supply bottlenecks holding back manufacturing production and the rebound in services activity continuing to lose momentum, in part due to supply issues spilling over to the sector.”

Joe Hayes, Senior Economist at IHS Markit said: “Responsibility for France’s economic recovery was placed firmly on the shoulders of the service sector in October, as latest PMI data showed manufacturing output falling for the first time since January. The overall rate of expansion slowed to a six-month low as the supply-side issues hurting manufacturers the most offset a faster expansion in services activity. Of the medley of letters that an economic recovery can look like, France’s growth profile is currently akin to a “K”.

USD/CHF’s decline continues today and intraday bias remains on the downside. Considering bearish divergence condition in daily MACD, firm break of 0.9162 support will argue that whole rise from 0.8925 has completed. Deeper decline would be seen to 0.9017 support next. On the upside, break of 0.9251 minor resistance will turn bias back to the upside for retesting 0.9367 instead. 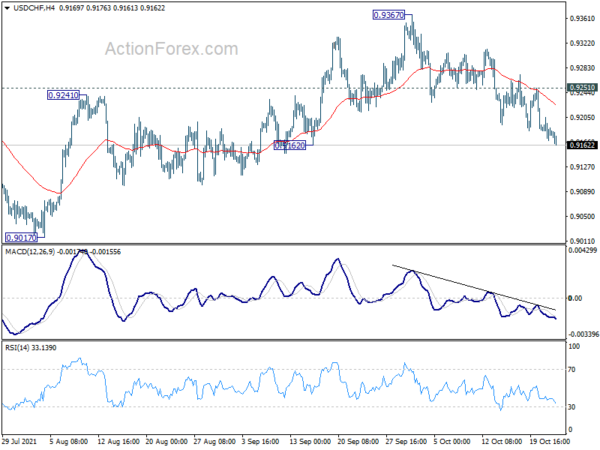 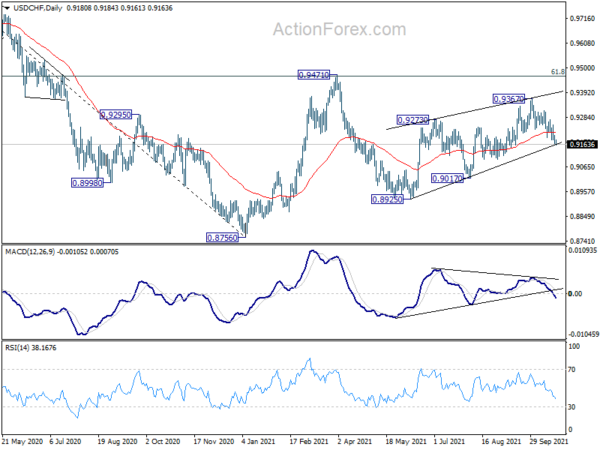