Trading in the currency market is rather quiet today, with major pairs and crosses stuck inside yesterday’s range. Other markets are also treading water with European indexes and US futures slightly up. Benchmark treasury yields are mixed. Gold is retreating slightly while oil prices are also range bound. As for the week, Dollar remains the worst performing one, followed by Canadian and Aussie. Swiss Franc is the strongest, followed by Euro and Kiwi.

Technically, US stocks have been very resilient this week, but there is no clear turn around in the near term trend yet. If overall sentiment does improve further, it’s likely that AUD/JPY would finally break through 91.15 resistance to resume the rebound from 87.28 low. Such development, if happens, would also firm the case that correction from 95.73 is finished, and bring retest of this high. In that case, stock markets should be staging a strong rebound too, or something is wrong underneath. 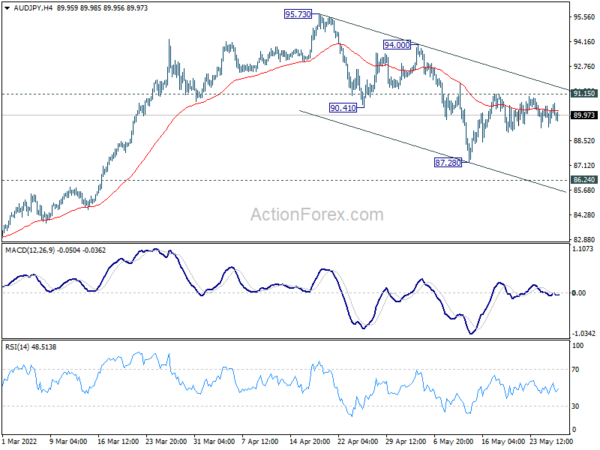 US initial jobless claims dropped to 210k continuing claims down to 1.348m

Canada retail sales was flat mom in March, worse than expectation of 1.5% mom rise. Sales were up in 10 of 11 subsectors, led by gasoline (up 7.4%). However, sales at motor vehicle and parts dealers (-6.4%) erased the gains observed in the remaining subsectors.

BoJ Governor Haruhiko Kuroda reiterated to the parliament today that ultra-loose monetary policy must be maintained for now. Consumer inflation is still expected to slow next year and beyond, after spiking above 2% target this year, only because of surging energy prices.

Nevertheless, Kuroda also noted when the right time comes, BoJ will plan an exit from easy policy. “The key would be how to raise interest rates and scale back the BOJ’s expanded balance sheet,” he said. “The BOJ can combine various means and ensure markets remain stable in executing a smooth exit from easy policy. I must add, however, that it won’t be easy,” he said.

Regarding exchange rate depreciation, Kuroda said Fed’s rate hike may not necessarily weaken the Yen, if they also shoot down stock prices.

Prime Minister Fumio Kishida said in the same parliament session, “sharp yen moves are undesirable. While a weak yen benefits exports and firms with overseas assets, it hurts households and some businesses via higher costs.”

Orr said that a recession is not projected for New Zealand, even though he cannot rule it out. Challenges to growth were coming through significant downgrades to global growth, particularly China.

USD/CNH finished pull back, heading back to 6.83

Yuan’s decline today suggests that the near term recovery is already completed and there’s risk of more downside. The selloff came after Chinese Premier Li Keqiang held a rare high-profile meeting yesterday on measures to support the economy. That’s is seen as a sign that the government is in deep worry about the impact of the extend tough pandemic lockdowns in many majors city, including Shanghai. 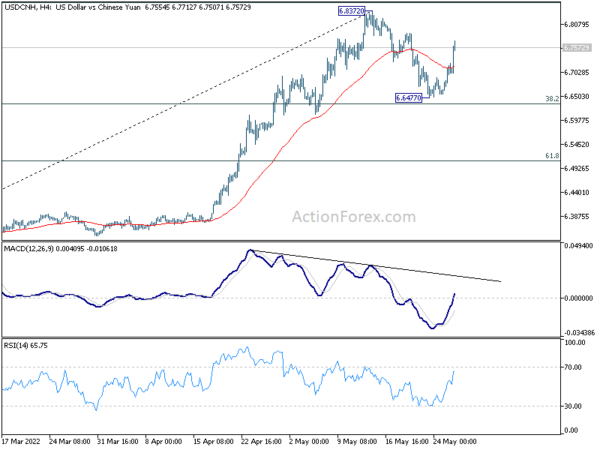 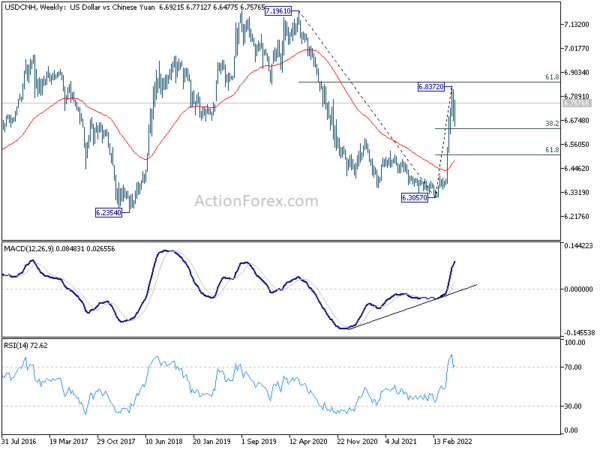 USD/CHF’s downside momentum is diminishing as in 4 hour MACD. While further decline cannot be ruled out, downside should be contained by 61.8% retracement of 0.9193 to 1.0063 at 0.9525 to bring rebound. On the upside, above 0.9763 minor resistance will turn bias back to the upside for recovery. However, sustained break of 0.9525 will bring deeper decline to 0.9459 support. 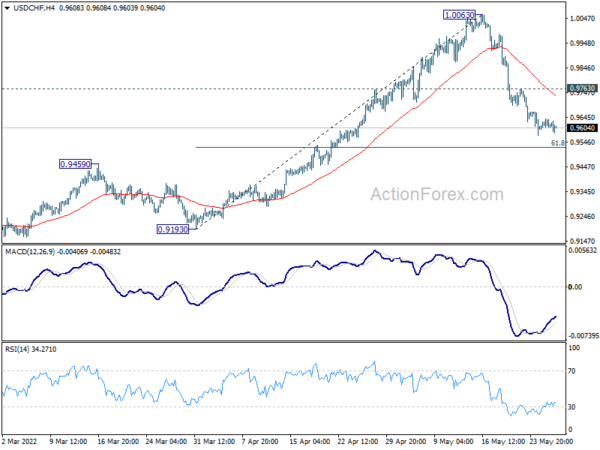 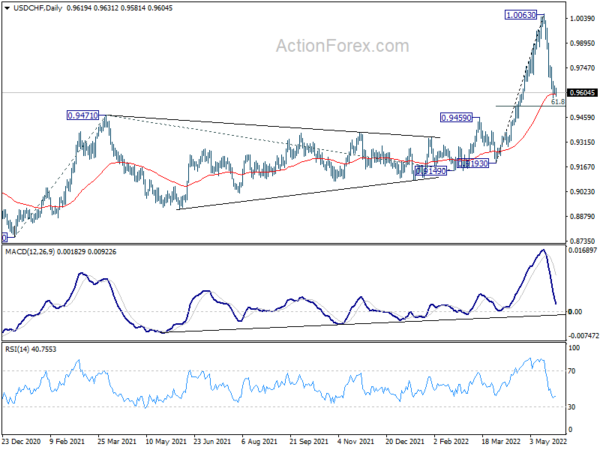