The forex markets are steady in tight range in Asia, while Dollar remains the strongest one for the week. Main focus today is on whether Fed would deliver a 75bps hike as markets fully priced in, or stick to its “original plan” of 50bps hike per meeting. Yen is staying as the second strongest on risk aversion while Euro is third. Sterling remains the worst performing, followed by other commodity currencies.

Technically, it should be pointed out that Dollar has yet to take out near term resistance level against most major currencies. The levels include 1.0348 in EUR/USD, 0.6828 support in AUD/USD, 1.0063 resistance in USD/CHF and 1.3075 resistance in USD/CAD. These are the levels for the greenback to overcome.

Australia Westpac Consumer Sentiment dropped from 90.4 to 86.5 in June. Over the 46-year history of the survey, the reading was only at or below this level during “major economic dislocations”, including during COVID-19, the Global Financial Crisis, early 90s recession, mid-80s slowdown and early 80s recession.

Westpac said: “The survey detail shows a clear picture of a slump in sentiment being driven by rising inflation; an associated lift in interest rates; and a loss of confidence around the economic outlook, both here and abroad.”

Regarding RBA policy, Westpac expects another 50bps rate hike in July, as the central bank needs to move quickly in the early stages in a tightening cycle when interest rates are clearly below neutral and risk of over-tightening is moderate.

The National Bureau of Statistics said the economy “showed a good momentum of recovery” in the month, “with negative effects from Covid-19 pandemic gradually overcome and major indicators improved marginally.”

Still, it warned, “we must be aware that the international environment is to be even more complicated and grim, and the domestic economy is still facing difficulties and challenges for recovery.”

FOMC rate decision is the major focus today. Just before last Friday, markets have well received Fed’s communication on the 50bps hike per meeting “plan”. But it’s another world now after data showed CPI inflation reaccelerated in May. Fed fund futures are pricing in near 100% change of a 75bps rate hike at this meeting. The question now is what Fed is going to deliver.

The new economic projections will also be closely watched too. The stubborn inflation reading should be reflected in the new forecasts, as well as it’s impact on growth and employment. More importantly, the dot plot will again catch most attention. Back in March, only 7 of 16 FOMC member penciled in interest rate above 2% by the end of 2022. The balance would likely shift further to the hawks’ side. But by how far? 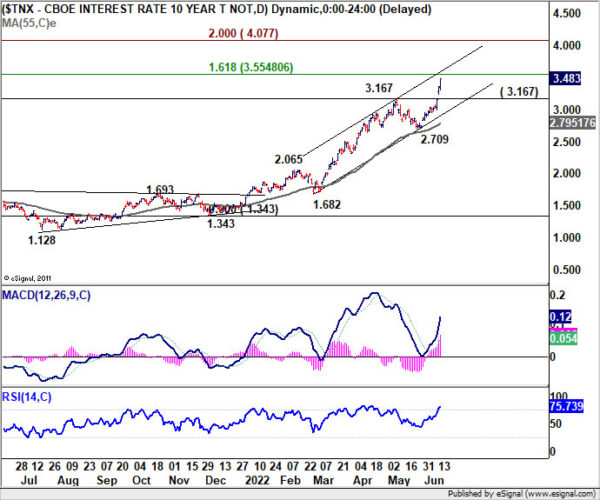 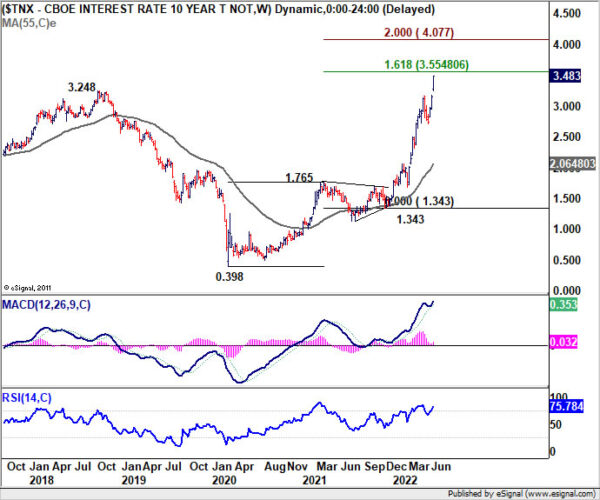 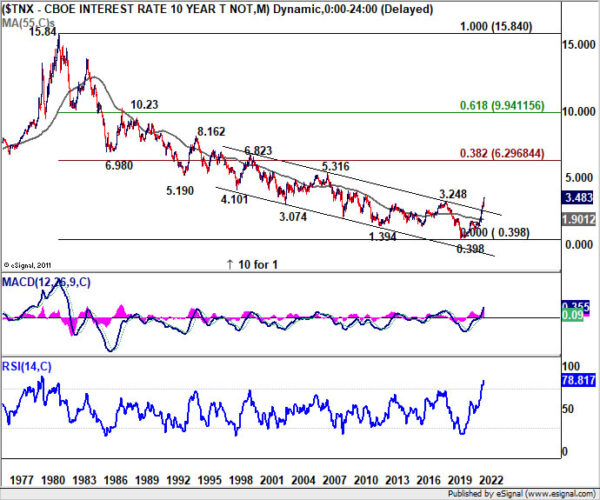 Swiss PPI and SECO economic forecasts will be released in European session. Eurozone will release trade balance and industrial production.

Intraday bias in USD/CAD remains on the upside for 1.3075 resistance. Firm break there will resume medium term rally and sustained trading above 1.3022 fibonacci level will carry larger bullish implications. Next target is 100% projection of 1.2005 to 1.2947 from 1.2401 at 1.3343. On the downside, below 1.2865 minor support will delay the bullish case and turn bias neutral first. 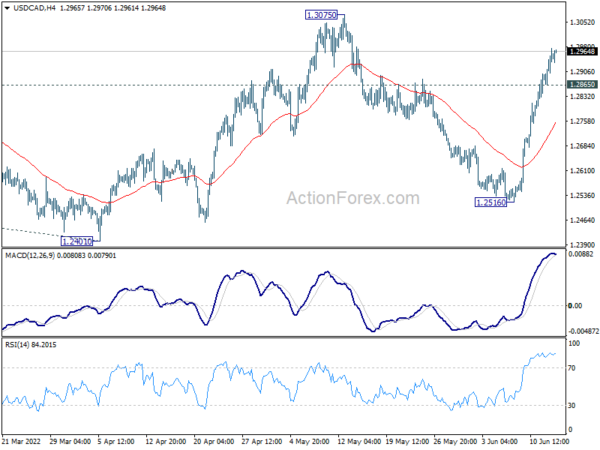 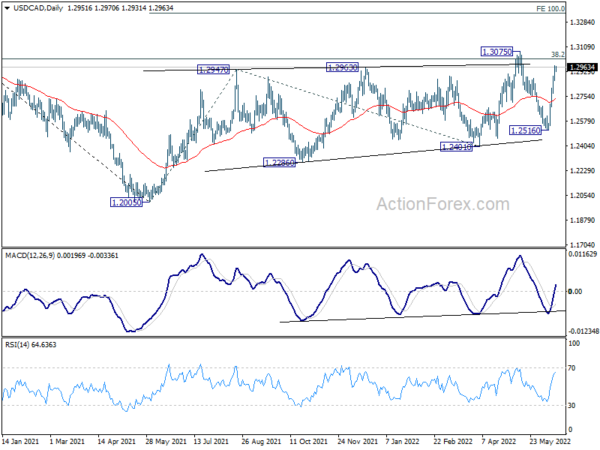