Sterling is in recovery today, and it’s supported by better than expected monthly GDP data. Yen is currently the softer one. But overall trading is quiet in the currency markets. RBNZ’s rate hike doesn’t give any lift to Kiwi. Canadian Dollar is range bound, awaiting BoC rate decision. Meanwhile, Dollar is consolidating recent gains, awaiting US CPI data. 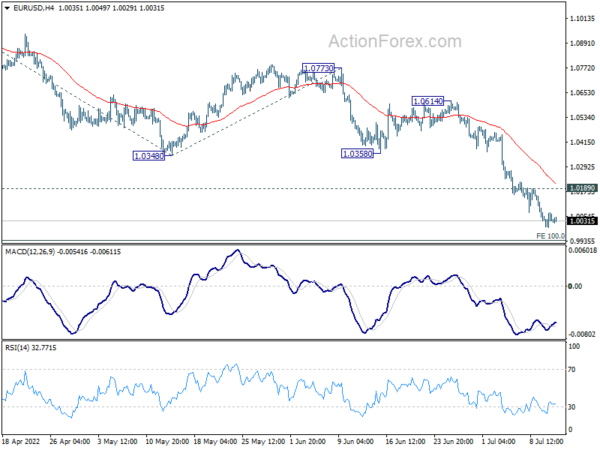 UK GDP grew 0.5% mom in May, much better than expectations

RBNZ raised Official Cash Rate by 50bps to 2.50% as widely expected. The central bank also indicated that it will follow the projected path to raise interest to nearing 3.5% by the end of 2022, and then around 4% in mid-2023.

“The Committee is comfortable that the projected path of the OCR outlined in the recent May Monetary Policy Statement remains broadly consistent with achieving its primary inflation and employment objectives – without causing unnecessary instability in output, interest rates and the exchange rate,” RBNZ said in the statement.

Also, as noted in the summary records of meeting, “The Committee agreed to maintain its approach of briskly lifting the OCR until it is confident that monetary conditions are sufficient to constrain inflation expectations and bring consumer price inflation to within the target range.”

Fed Barkin expects inflation to come down, but not immediately, not suddenly, and not predictably

“I expect inflation to come down but not immediately, not suddenly, and not predictably,” he said. “My expectations are it will be a slower path rather than an immediate path down to 2%.”

Barkin also said he’s open to a 50bps or 75bps hike in July. “I am one of the guys who like the option value of deciding the week of the meeting as opposed to two weeks before the meeting. But I thought Jay’s (Fed Chair Jerome Powell) guidance the last time was very sound,” he added.

IMF Managing Director Kristalina Georgieva said: “In sum, we are confident the Fed will be effective in bringing inflation down, will remain data dependent and, as conditions change, will telegraph clearly where policy is likely to go. This is important not just for the U.S. but also for the global economy.

Eurozone industrial production will be released today. But major focuses will firstly be on US CPI. Then, BoC is expected to raise interest rate again, probably by a jumbo 75bps. Fed will also publish Beige Book economic report.

EUR/GBP’s decline is continuing today and intraday bias remains on the downside. Rebound from 0.8201 should have completed at 0.8720, after rejection by 0.8697 medium term fibonacci level. Further fall would be seen to retest 0.8201/48 support zone next. On the upside, above 0.8488 minor resistance will turn intraday bias neutral first. 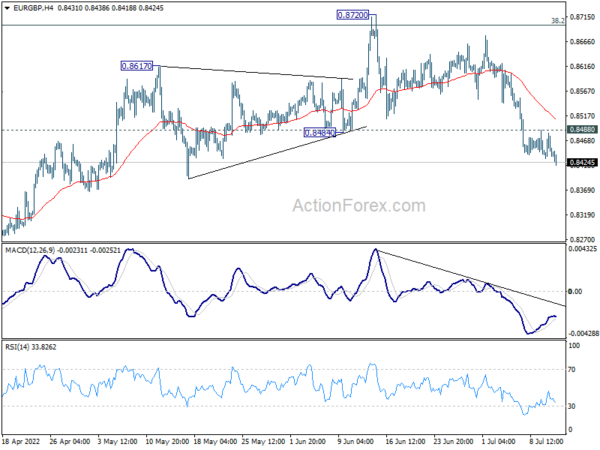 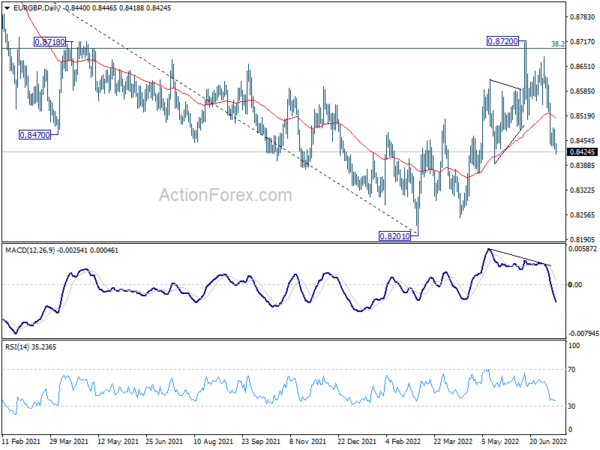