Dollar Still in Driving Seat as Markets Await Next Moves

The markets are overall steady in Asia today. Yen attempted a rebound yesterday but there was no follow through buying so far. Dollar’s rally also lacks sustained push. While commodity currencies are staying as the worst performer for the week, there is sign of some live against Euro. But that’s probably more due to Swiss Franc’s pressure on the common currency than other reason. Trades will look into reactions to US retail sales data as next guidance.

Technically, near term outlook in Dollar is staying bullish in general, and upside break out is in favor. The levels to watch include 0.9863 support in EUR/USD, 1.1404 support in GBP/USD, 0.6698 support in AUD/USD, 144.98 resistance in USD/JPY, and 1.3207 resistance in USD/CAD. Judging from current sentiment, AUD/USD and USD/CAD has the potential to take the lead.

ECB Chief Economist Philip Lane said in a speech that risks to the inflation outlook are “primarily on the upside”. Major short term risk is a “further disruption of energy supplies”. Over the medium term, inflation may turn out to be higher than expected because of a “persistent worsening of the production capacity”, further increases in “energy and food prices”, and rise in “inflation expectations above our target” or higher “anticipated wage rises.

“In the context of a long projected period with inflation far above target, the net upside risks to inflation and taking into account that the current setting of the key policy rates is still highly accommodative, it was appropriate to take a major step that frontloads the transition from the prevailing highly-accommodative level of policy rates towards levels that will support a timely return of inflation to our target,” he said, about last week’s 75bps rate hike”.

“In calibrating a multi-step transition path, the appropriate size of an individual increment will be larger, the wider the gap to the terminal rate and the more skewed the risks to the inflation target, he added.

Japan exports rose 22.1% yoy to JPY 8062B in August, driven by shipments of auto and chip-related equipment. Imports rose 49.9% yoy to JPY 10879B. That’s the largest increase by value on record, since data became available back in 1979. The rise was driven by higher prices for energy including crude oil, coal, and LNG.

“The reopening of borders, easing of both domestic and international travel restrictions, and fewer domestic restrictions under the Orange traffic light setting supported growth in industries that had been most affected by the COVID-19 response measures,” national accounts – industry and production senior manager Ruvani Ratnayake said.

“In the June 2022 quarter, households and international visitors spent more on transport, accommodation, eating out, and sports and recreational activities.”

Intraday bias in AUD/USD stays neutral first. Prior rejection by 55 day EMA is a near term bearish sign. Decisive break of 0.6680 will resume larger down trend. Next target will be 0.6461 long term fibonacci level. On the upside, break of 0.6915 resistance will be a near term bullish signal, and bring stronger rally through 0.7008 towards 0.7135 resistance. 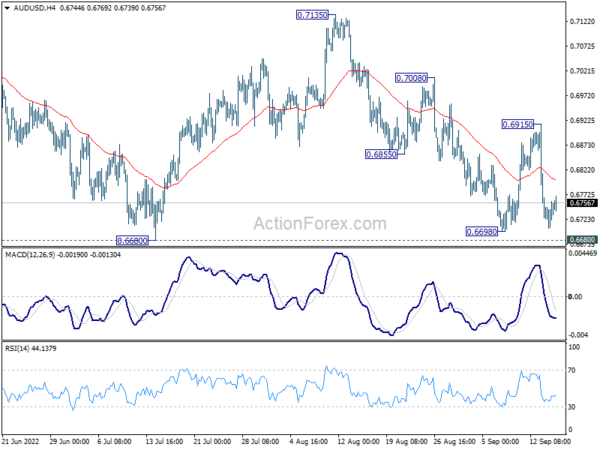 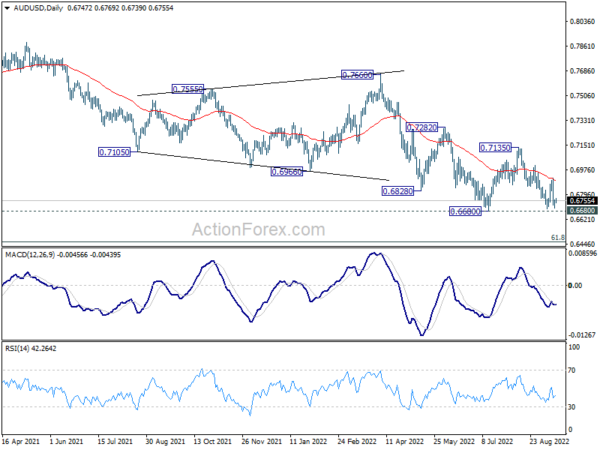