Dollar remains broadly softer, and stays as the worst performer for the week. It’s partly dragged down by the pull back in treasury yields, with 10-year yield breaching 4% handle overnight. Canadian Dollar is the next weakest, after the smaller than expected 50bps rate hike by BoC. On the other, Sterling remains the winner on political stabilization, but Euro is not too far away. The common currency indeed has prospect to overwhelm the Pound as reaction to today’s ECB rate decision, which will catch all attention.

Technically, commodity currencies will also be a focus today. Risk-on sentiment in the US was rather uneven. That is, DOW’s rebound was very strong. But NASDAQ lacked well behind. That’s a reason for the relative indecisiveness in Aussie and Canadian. Attention will stay on 0.6539 resistance in AUD/USD, and 1.3501 support in USD/CAD. Firm break of these levels will align the outlook with EUR/USD and GBP/USD, and indicate that more selling in Dollar is underway. But of course, that would be subject to the development in overall market sentiment. 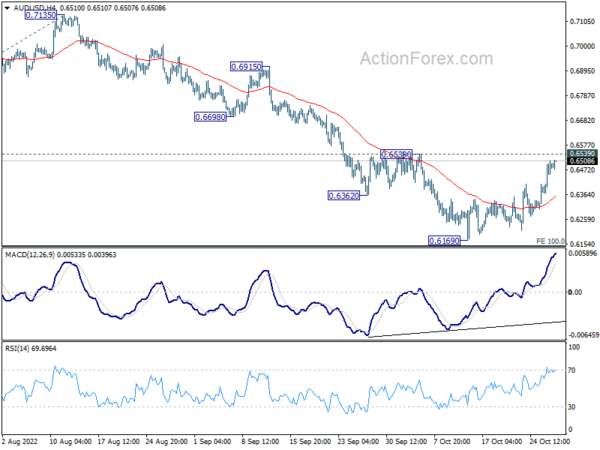 RBNZ Governor Adrian Orr said in a speech that New Zealand’s financial systems remains “well placed to support the economy”, but there will be “stresses in business and amongst households as interest rates and asset prices adjust”.

Regarding monetary policy objective, he emphasized, “we have our eyes firmly focused on meeting our inflation target”. He also mentioned that inflation is still too high in an absolute sense.”

“Central banks globally — the Reserve Bank of New Zealand included — are working to actively slow domestic spending by raising interest rates so as to constrain inflation,” said Orr. “This means employment prospects will be increasingly compromised.”

ECB is widely expected to raise interest rates by 75bps today. After that, the main refinancing rate will be at 2.00%, and the once negative deposit rate will be at 1.50%. President Christine Lagarde would signal that more tightening lies ahead, but the decision will stick to a meeting-by-meeting approach, and be data dependent.

There might be discussions on quantitative tightening, but it’s still too soon to make a decision. The markets are expecting that concrete steps on shrinking the balance will only happen early next year.

Here are some previews on ECB:

Regarding reaction to ECB decision, EUR/CHF is an interesting one to watch, as it’s now eyeing parity. The cross was in persistent decline from June to September, after SNB surprisingly acted on interest rate earlier than ECB. Back then, ECB was still adjusting their forward guidance that rate hike would come weeks after stopping asset purchases. Now that ECB is catching up with global tightening pace, there is more upside prospect in the crosses. 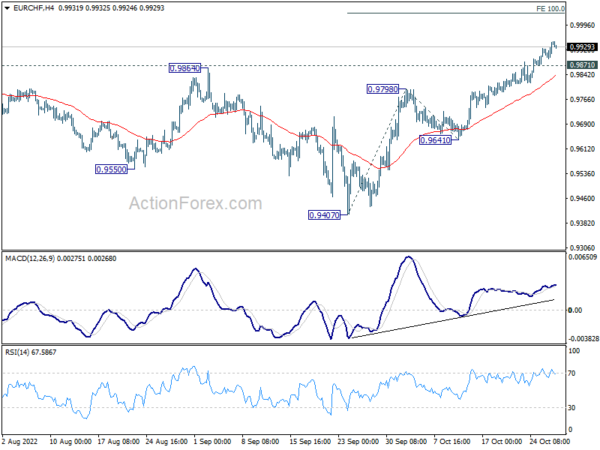 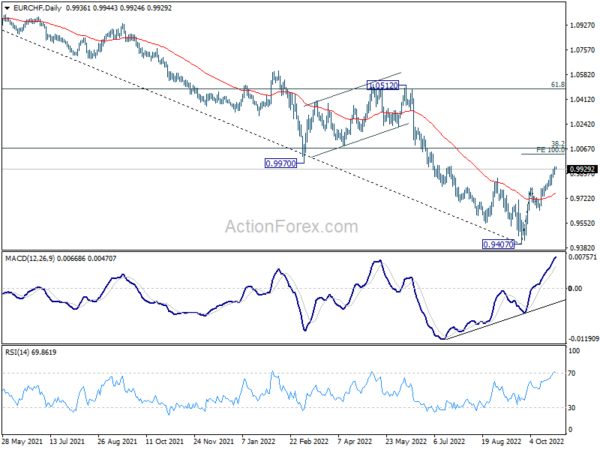 Australia import price index surged 3.0% qoq in Q3, much higher than expectation of 0.8% qoq. Germany Gfk consumer confidence is the main data release in European session. Later in the day, US will publish Q3 GDP and September durable goods orders. 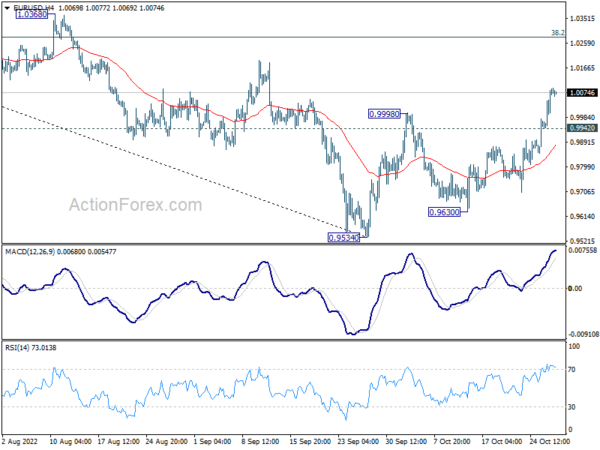 In the bigger picture, the case of medium term bottoming at 0.9534 building up, with bullish convergence condition in daily MACD. While it is too early to call for trend reversal, firm break of 0.9998 opens up stronger rebound back to 55 week EMA (now at 1.0630) even as a corrective rise. This will now be the favored case as long as 55 day EMA (now at 0.9937) holds. 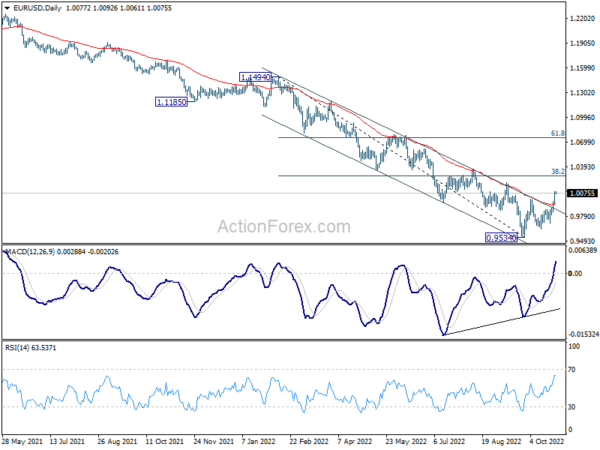