Aussie Higher after RBA Hike, Except Versus Kiwi

Australian Dollar trades higher today, following recovery in Asian stock markets. RBA hikes by 25 bps as widely expected and indicates more tightening to come ahead. There is little reaction as the message is well digested by the markets already. Nevertheless, Aussie is slightly outperformed by New Zealand Dollar for the moment. On the other hand, Dollar, Yen and Swiss France turned softer while European majors are mixed with Canadian.

Technically, while Aussie is firmed elsewhere, it’s extending recent decline against Kiwi. AUD/NZD’s break of 1.0987 support suggests that deeper correction is underway. Near term outlook will stay bearish as long as 1.1174 resistance holds. Next target is 61.8% retracement of 1.0287 to 1.1489 at 1.0746. Such development would momentum of Aussie’s rebound elsewhere. 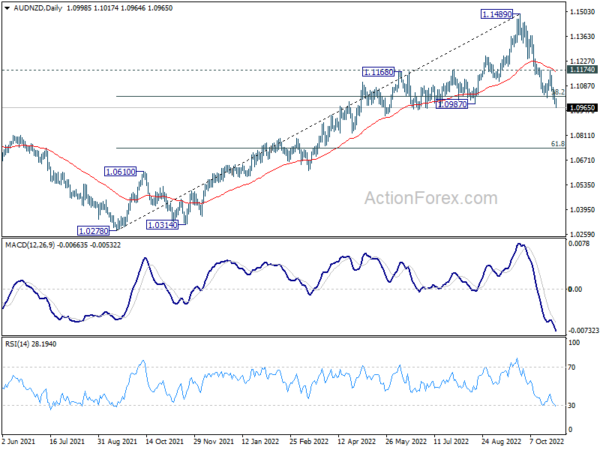 RBA hikes 25bps, rates to rise further over the period ahead

RBA raises cash rate target by 25bps to 2.85% as widely expected. It maintains tightening bias and expects to “increase interest rates further over the period ahead”. The size and timing of future rate hikes will be determined by incoming data and the outlook for inflation and labor market.

Wang Zhe, Senior Economist at Caixin Insight Group said: “Overall, the negative impact of Covid controls on the economy lingered. In October, supply, domestic and overseas demand, and employment in the manufacturing sector all contracted, but the rates of contraction slowed from the previous month. Costs rose slightly, and cuts to output prices were still common. Logistics and transportation were still sluggish, and companies’ purchases and inventories rose slightly. Market sentiment improved, but optimism remained limited from a long-term perspective.

Laura Denman, Economist at S&P Global Market Intelligence, said: “Sluggish markets and weaker demand conditions, on both a domestic and international level, became a recurring trend throughout the report and were seemingly the driving forces behind the slower sector performance… Meanwhile, inflationary pressures remained severe..

“Japanese manufacturing firms increased their selling prices more aggressively, as signalled by a near-record rate of output cost inflation…. Despite this, firms seem unfazed by the challenges that the sector is currently facing remaining optimistic towards their 12-month outlook on growth in October. In fact, the degree of confidence accelerated from September and reached a nine-month high.”

AUD/USD recovered after drawing support from 0.6371, but stays below 0.6539 resistance. Intraday bias stays neutral first. On the upside, decisive break of 0.6535 resistance, and sustained trading above 55 day EMA (now at 0.6553), will raise the chance of medium term bottoming, and target 0.6680 support turned resistance next. On the downside, below 0.6371 minor support will turn bias back to the downside for retesting 0.6169 low instead. 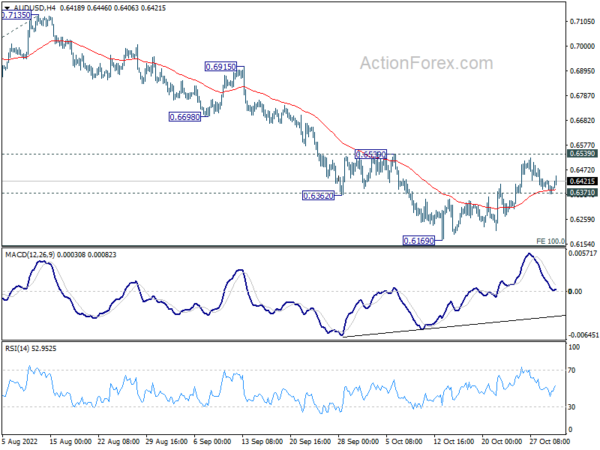 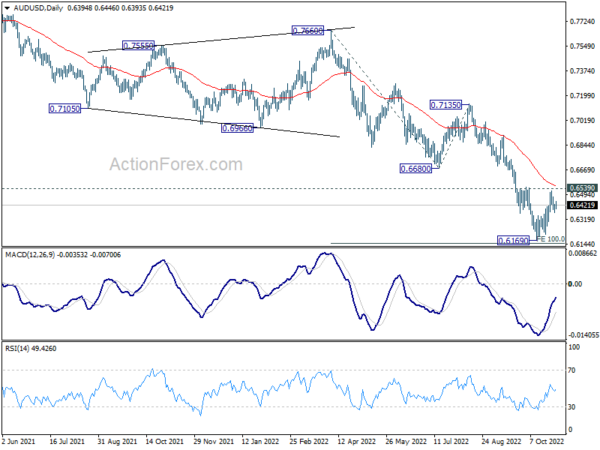