Sterling dives sharply after dovish BoE rate hike, which saw two doves dissented. Aussie and Kiwi are following as next weakest as risk-off sentiment persists. Dollar’s post-FOMC rally is accelerating, partly supported by expectation of a higher terminal rate for Fed, and partly by risk aversion. Yen is following as next strongest, and then Canadian, while Euro and Swiss Franc are mixed.

Technically, as Sterling’s selloff picks up, focus will be on 0.8779 minor resistance in EUR/GBP, 164.95 minor support in GBP/JPY, and 1.1283 resistance turned support in GBP/CHF. Firm break of these levels will at least trigger squaring of position built up from the spike low during Liz Truss’s era in September. In particular, for GBP/CHF, that would set up deeper decline to 1.0893 support. 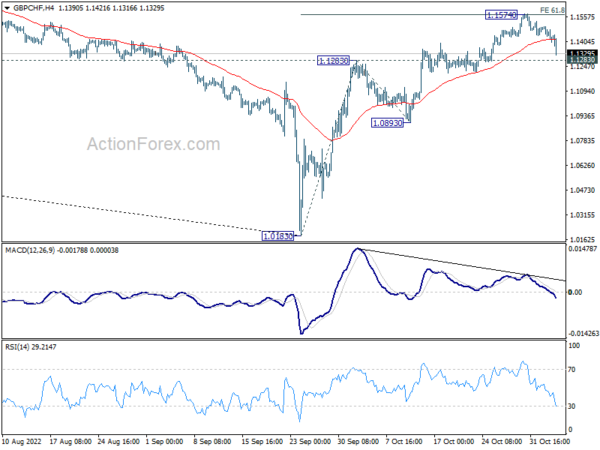 US trade deficit widened to USD -73.3B in September, larger than expectation of USD -70.3B.

From Canada, trade surplus narrowed to CAD 1.1B in September, matched expectations.

BoE raises Bank Rate by 75bps to 3.00%. The decision was made by 7-2 votes. Swati Dhingra voted for 50bps hike while Silvana Tenreyro voted for just 25bps hike.

Tightening bias is maintained as “should the economy evolve broadly in line with the latest Monetary Policy Report projections, further increases in Bank Rate may be required for a sustainable return of inflation to target, albeit to a peak lower than priced into financial markets.”

But there are “considerable uncertainties” around the outlook. If outlook suggests more persistent inflation pressures, the Committee will “respond forcefully”.

“UK service providers reported the steepest drop in business activity for 21 months in October as household spending cutbacks and shrinking business investment combined to dent new order volumes… Stubbornly high inflation, increased borrowing costs and worries about the UK economic outlook all contributed to weaker business optimism in October… Aside from the slump at the start of the pandemic, the degree of confidence across the service economy is now the lowest since December 2008.”

ECB Lagarde: We cannot progress at same pace as Fed

“We have to be attentive to potential spillovers,” said. “We are not alike and we cannot progress either at the same pace (or) under the same diagnosis of our economies.”

“But we are also influenced by the consequences particularly through the financial markets, and to a lesser extent, through trade as well, because clearly the exchange rate matters and has to be taken into account in our inflation projections,” Lagarde said.

ECB Executive Board member Fabio Panetta said in a speech, “at present, the direction of monetary policy is clear”. And, a “further policy adjustment is warranted in order to keep inflation expectations anchored and stave off second-round effects.”

However, “the calibration of our stance should not rely on a one-sided view of risks − especially as we continue normalising our monetary policy in a highly uncertain economic environment,” he added. “And it should remain focused on medium-term inflationary developments.”

“Our policy stance must remain evidence-based and adapt to changes in the medium-term inflation outlook, avoiding an excessive focus on short-run developments and fully taking into account the risks emanating from the domestic and global economic and financial environment,” he emphasized.

“This approach will allow us to successfully navigate the risks we face while avoiding the danger of tripping over unintended effects.”

ECB Kazaks: There’s no need to pause at the turn of the year

ECB Governing Council member Martins Kazaks said, “it’s clear that interest rates will need to rise much higher to bring inflation down to the target of 2% over medium term.”

“There’s no need to pause at the turn of the year. The rate increases must continue into the next year — until inflation, especially core inflation, shows a visible slowdown,” he said.

“In my view, recession in the euro area is a baseline scenario, but so far it’s likely to be relatively shallow and brief,” Kazaks said. “And hence insufficient to break the backbone of inflation persistence.”

RBNZ Governor Adrian Orr told a parliamentary committee that the central bank has “laser-like focus” on bringing inflation down to target. Yet, he admitted that, “the (inflationary) shocks still arriving through the global economy are significant and this is where people need to think about their own ability to weather an enormous amount of unanticipated activities.”

“Meanwhile around our confidence of having inflation under control – that is very high, because we control the end outcome through the interest rate environment. So, that’s a guessing game. That’s about the things we will have to do to achieve low and stable inflation, subject to the continuing buffering of shocks left right and centre. Resilience and humility,” he added.

China Caixin PMI services dropped to 48.4, lowest since May

Wang Zhe, Senior Economist at Caixin Insight Group said: “Both supply and demand contracted to different degrees. The overall employment level increased slightly thanks to an expansion in employment of the services sector. Input costs for all surveyed enterprises rose slightly, while prices charged remained stable. Market sentiment improved but was still below the long-term average.

“Overall, the negative impact of Covid controls on the economy lingered, and the economy was faced with increasing downward pressure. In October, activities in the manufacturing and services sectors continued to shrink, while supply and both domestic and overseas demand contracted. Business costs increased. Service providers were in a better position than manufacturers in terms of prices charged and employment.”

GBP/USD’s break of 1.1256 suggests that rebound from 1.0351 has completed with three waves up to 1.1644, ahead of 1.1759 support turned resistance. The development retains larger bearishness. Intraday bias is back on the downside for 1.0922 support first. Break there will target a retest on 1.0351 low. For now, risk will stay on the downside as long as 1.1644 resistance holds, in case of recovery. 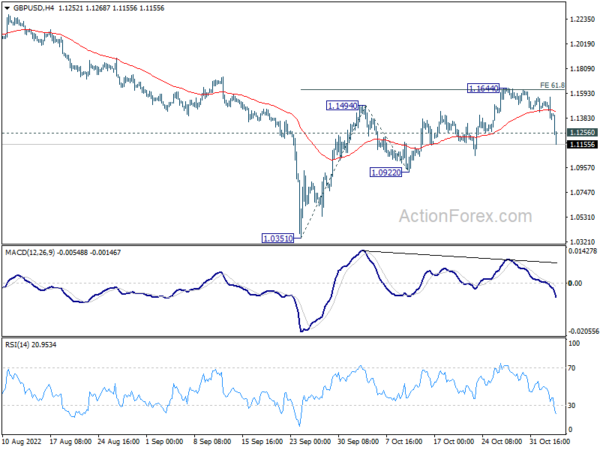 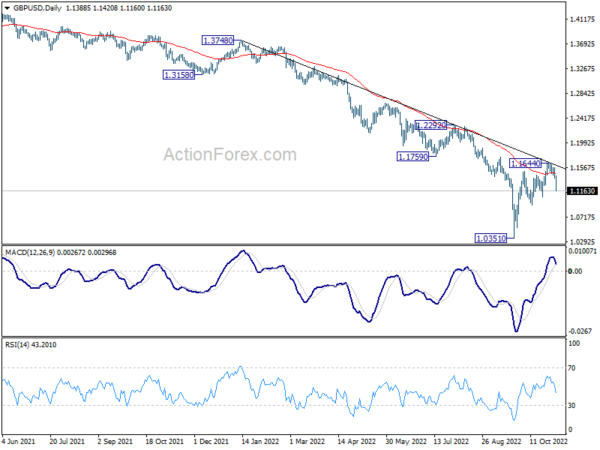