Canadian Dollar is currently the weakest one in otherwise sluggish markets. Falling oil price is a factor dragging down the Loonie, and traders are also cautious on a dovish rate hike by BoC tomorrow. There is still no clear follow through buying in Dollar against others. Aussie is steady after RBA rate hike earlier today, but looks vulnerable. meanwhile, European majors are mixed with Swiss Franc having a slight upper hand. Yen is apparently waiting for guidance from the stock and bond markets. 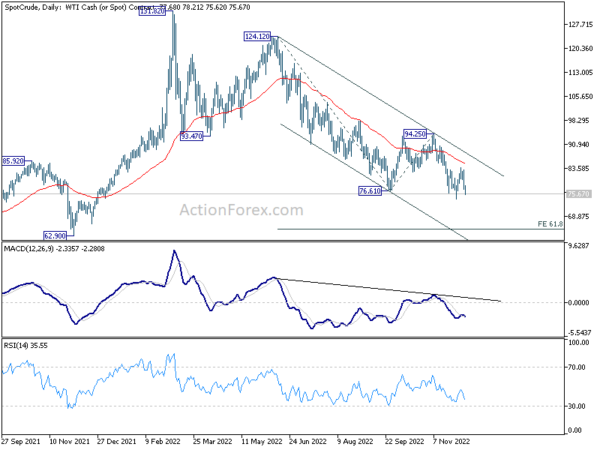 US trade deficit widened to USD -78.2B in Oct

US exports of goods and services dropped USD 1.9B over the month in October, while imports rose USD 2.2B. Trade deficit widened from USD -74.1B to USD -78.2B, smaller than expectation of USD -79.4B.

ECB Chief Economist Philip Lane said in an interview, “I would be reasonably confident in saying that it is likely we are close to peak inflation”. But it’s still uncertain whether inflation has peaked or it will arrive at the start of 2023. He didn’t rule out some extra inflation early next year. But, “once we are past the initial months of 2023, later on in 2023 – in the spring or summer – we should see a sizeable drop in the inflation rate.” Still, the journey back to 2% will “take time”.

“We need to recognise that the interest rate decisions we have already made will help to reduce the inflation rate next year and the year after that,” he said. “We do expect that more rate increases will be necessary, but a lot has been done already, so we will have to ensure we have a good understanding of the inflation outlook, and the risk factors when setting the interest rate on a meeting-by-meeting basis.”

Lane also said, “QT should essentially be a background programme”. That is, policymakers will ensure QT makes its contribution to policy normalization in “a way that reinforces the primary instrument, which is setting rates”.

ECB Herodotou: There will be another hike or hikes

ECB Governing Council member Constantinos Herodotou said, “We are very near the neutral rate. There will be I think another hike or hikes.”

“There are a number of variables that may give some comfort and should there be an economic impact, it won’t be.. a hard landing” he said, pointing to fiscal support and the robust jobs market.

RBA raises cash rate by 25bps to 3.10% as widely expected. Tightening bias is maintained as “the Board expects to increase interest rates further over the period ahead”, even though it’s “not on a pre-set course”. The size and timing of future rate hikes will continue to be determined by incoming data and the outlook for inflation and job market. The path to slow inflation and achieve a soft landing remains a “narrow one”.

The central bank expects inflation to peak at around 8% in Q4, and then decline next year due to “ongoing resolution of global supply-side problems, recent declines in some commodity prices and slower growth in demand”. Medium-term inflation expectations “remain well anchored”. Inflation is expected to decline to “a little over 3 per cent over 2024”.

RBA also expects growth to “moderate over the year ahead” to 1.50% in 2023 and 2024. Labor market remains “very tight” but employment growth has slowed. Wages growth is “continuing to pick up”. “Given the importance of avoiding a prices-wages spiral, the Board will continue to pay close attention to both the evolution of labour costs and the price-setting behaviour of firms in the period ahead.”

BoJ Governor Haruhiko Kuroda told the parliament, “the BOJ is seeking to sustainably and stably achieve its 2% inflation target accompanied by wage growth. Our view is that this will likely take more time.”

“It’s therefore premature to discuss specifics about our monetary policy framework,” he said.

“We’ll maintain our current monetary policy to make it easier for companies to raise wages,” he added.

Intraday bias in USD/CAD stays neutral first with immediate focus on 1.3644 resistance. Firm break there will affirm the case that correction from 1.3976 has completed at 1.3224. Further rise should then be seen to 1.3807 resistance first. However, break of 1.3383 will likely resume the fall from 1.3976 through 1.3222 cluster support, which carries larger bearish implications. 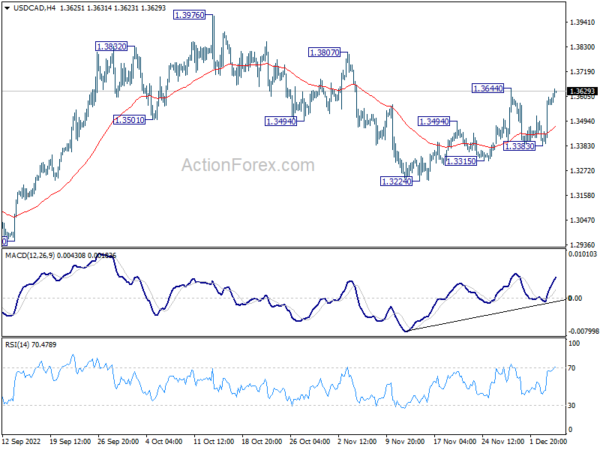 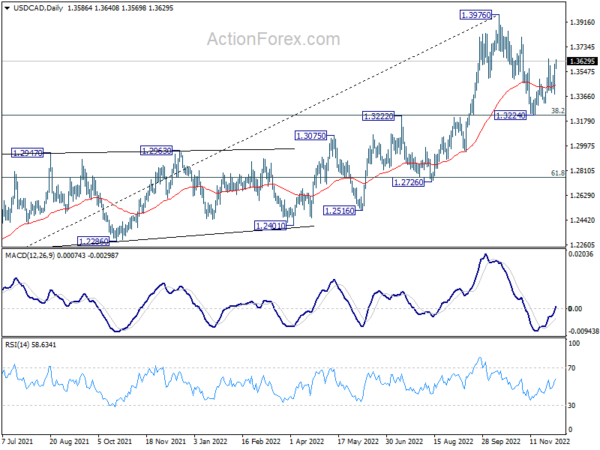