Dollar softens mildly again in rather subdued trading in Asia. Many markets are still on Lunar New Year holiday. For now, Australia Dollar is the relatively stronger one for the week, followed by New Zealander. Euro is maintaining some of this week’s gains, but there is no follow through buying. Yen is the weakest one despite today’s mild recovery, follow by Sterling and Swiss Franc. Dollar and Canadian are mixed. Overall, nearly all major pairs and crosses are trading inside last week’s range. Focuses will turn to PMIs from Eurozone, the UK and US.

Technically, some attention will be on the development in NASDAQ this week. After yesterday’s rally, 11571.64 resistance is within reach. Decisive break there will complete a double bottom pattern (10088.82, 10207.47) which should at least signal medium term bottoming, on bullish convergence condition in daily MACD too. In this case, further rise should then be seen towards 13181.08 resistance. Risk-on sentiment would continue to cap Dollar’s rally. 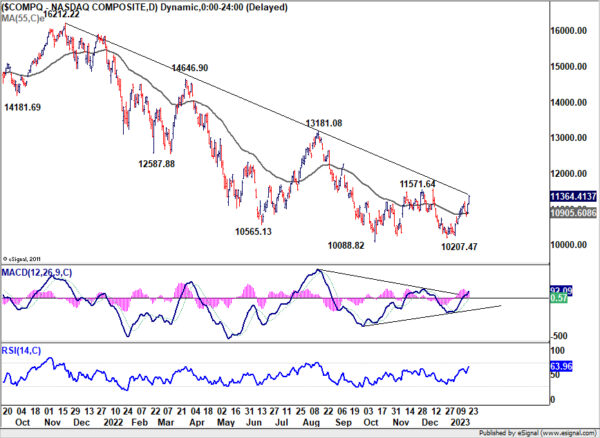 ECB Lagarde: Rates still have to rise significantly at a steady pace

ECB President Christine Lagarde said in a speech that the “high inflation environment” is a big challenge facing Europe. And, that’s “the challenge that concerns me the most”.

“We must bring inflation down. And we will deliver on this goal,” she emphasized. “We have made it clear that ECB interest rates will still have to rise significantly at a steady pace to reach levels that are sufficiently restrictive, and stay at those levels for as long as necessary.”

“In other words, we will stay the course to ensure the timely return of inflation to our target.”

Another challenge Lagarde named is to “best protect Europe’s critical interests… as the next chapter in the globalisation story is being written”. Europe must be “prepared for a future in which the global economy could fragment”, and “develop more our own sources of growth.”

BNZ Senior Economist Craig Ebert said that “December marked a significant slowdown in a short space of time for the PSI, although the maintained loftiness in New Orders/Business suggested there was still a lot of demand-side pressure at play”.

Australia PMI composite rose to 48.2, economy is not slowing sufficiently for RBA

“Following eight consecutive rate hikes in 2022, the RBA Board will be meeting for the first time on 7 February. The latest PMI readings may raise the concern that the economy is not slowing sufficiently to bring inflation back to target in a timely manner…

“Inflation pressures may abate somewhat but the risk for the RBA is that inflation remains stubbornly high well into 2023. This could maintain upward pressure on inflation expectations and wages growth. On this basis it seems premature for the RBA to pause the current tightening cycle….

“We expect the RBA to hike the cash rate by 25bp in each of February and March before an extended pause. Further rate hikes may be required later in 2023 if the economy and inflation prove more resilient than current consensus forecasts suggest.”

NAB Chief Economist Alan Oster said: “The main message from the December monthly survey is that the growth momentum has slowed significantly in late 2022 while price and purchase cost pressures have probably peaked”.

“The gap between current business conditions and business confidence remains wider than usual though has narrowed. Ultimately while on average business reports still healthy activity at present, they don’t necessarily expect that to last.”

Laura Denman, Economist at S&P Global Market Intelligence, said: “Japan’s private sector kicked off 2023 on a more positive note, as signalled by activity returning to growth territory in January. However, similar to trends recorded over much of the past six months, a divergence between the manufacturing and services sectors has remained.

Germany Gfk, Swiss trade balance; Eurozone PMIs and UK PMIs will be the focuses in European session. Later in the day, US will also release PMIs too. 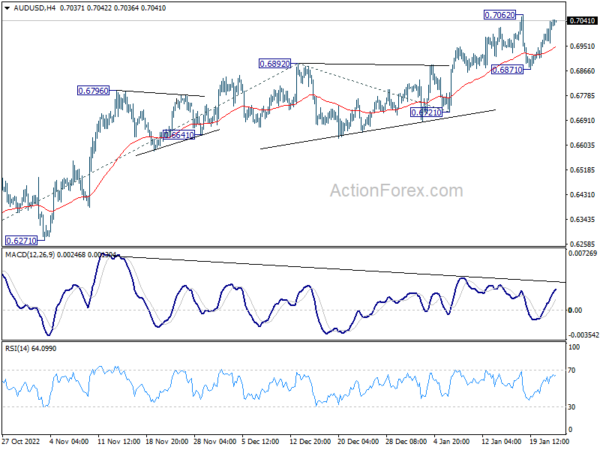 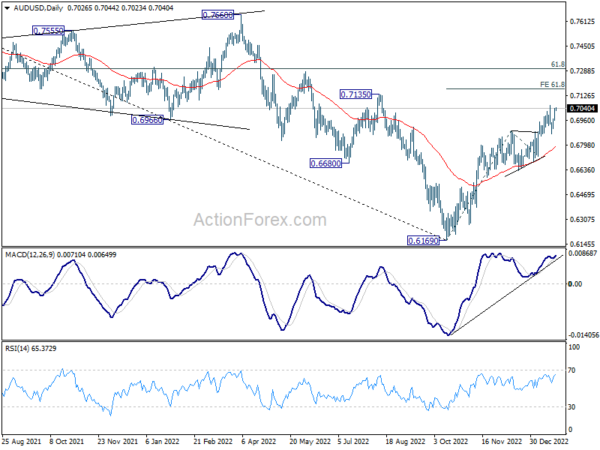