In the currency markets, New Zealand Dollar is so far the weakest one for the week as selloff extends today. Yen is not much better as it’s closely following as the second weakest. On the other hand, Swiss Franc is the second strongest one, as helped by EUR/CHF’s rejection from 1.2 handle. But the Franc is losing momentum in Asian session as it turned mixed. We might see EUR/CHF revisit 1.2 again pretty soon.

Technically, EUR/USD’s break of 1.2214 support now revived the case of medium term trend reversal. That also helped lifted Dollar index to 91, with medium term trend line resistance taken out. The firm break of 108 resistance in USD/JPY and 1.2814 in USD/CAD also aligned Dollar’s near term bullish outlook with others. Yen would be a focus today as USD/JPY’s yield drive rally might take other Yen crosses higher. In particular, EUR/JPY is having last week’s high of 133.08 in sight.

Australia CPI was unchanged at 1.9% yoy in Q1, below expectation of 2.0%. RBA trimmed mean CPI rose to 1.9% yoy, up from 1.8% yoy and beat expectation of 1.8% yoy. RBA weighted median CPI was unchanged at 2.0% yoy, beat expectation of 1.9% yoy. The Australian Bureau of Statistics noted in the  release that “while the annual CPI rose 1.9 per cent, most East Coast cities have continued to experience annual inflation above 2.0 per cent, due in part to the strength in prices related to Housing and Food. Softer economic conditions in Darwin and Perth have resulted in annual inflation remaining subdued at 1.1 and 0.9 per cent respectively.”

AUD/USD spiked lower to 0.7576 after the release but quickly recovered. Firstly, the decline is a bit stretched after AUD/USD fell for three days. Secondly, the CPI data just affirmed the case that RBA is in no rush to raise interest rate. 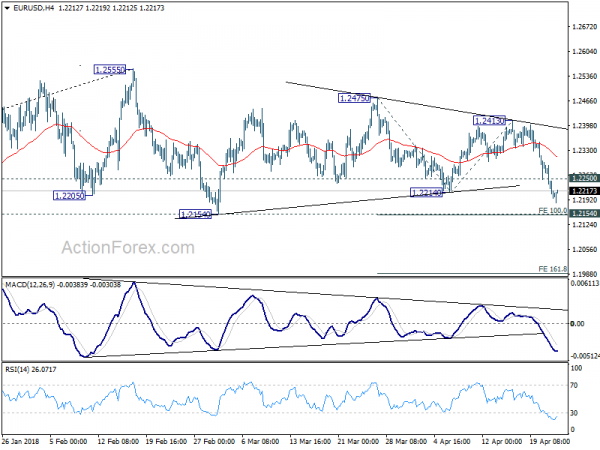 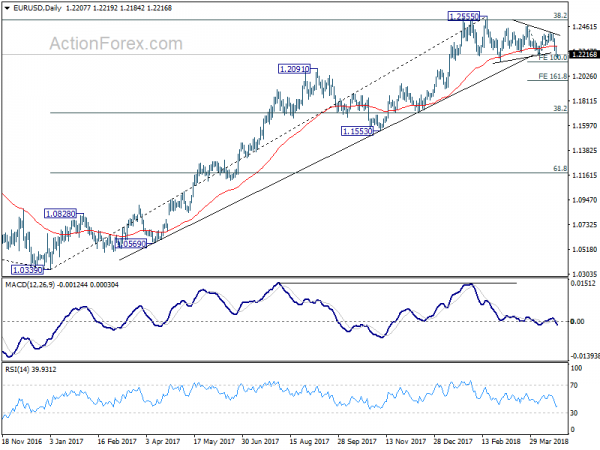