Dollar and Yen Staying Near Term Bullish Against Euro, With Weaker Momentum

The forex markets are basically staying in recent trends, but with weaker momentum. Dollar extended the rally against Euro and Swiss Franc, but it’s kept in tight range against Sterling, Aussie and Loonie for the momentum. Yen, is broadly higher today, with EUR/JPY dipping through last week’s low. But GBP/JPY and USD/JPY are held in tight range too. Australian dollar trades a touch lower after disappointment from retail sales data but there is no follow through selling. The economic calendar is not busy today and might provide little inspiration. The volatility trigger could be US President Donald Trump’s decision on the Iran nuclear deal.

WTI crude oil jumped to as high as 70.84 yesterday but is now back below 70. Trump said he will announce the decision today on whether to stay in the so called Joint Comprehensive Plan of Action, or pullout from it. It’s an agreement signed three years ago between the US, UK, France, Germany, Russia and China, to ease sanctions on Iran in exchange for control over its nuclear program.

It’s estimated that Iran’s oil exports could be lowered by 200k to 300k bpd as a result of US withdrawal. And that could push WTI through 70 handle decisively. Trump tweeted his criticism on OPEC for “artificially” propping up prices last month. But according to a Barclays Research report title “Trump and the Art of (Breaking the Iran) Deal”, Trump’s “foreign policy continues to ignite tensions in the main oil-exporting center and is, thus, price supportive.”

Thomas Barkin delivered his first speech as Richmond Fed President overnight and expressed his support for more rate hikes ahead. But he declined to comment on how many hikes this year he expects. He noted that “monetary policy is still pretty accommodative”. And, “when unemployment is low and inflation is effectively at our target, we probably ought to go to neutral in that environment.” Also, “the economy’s performance as we sit here today is remarkably strong: above trend growth, low unemployment, inflation at target.”

But Barkin also warned on the risks from the trade tensions between US and other countries. He said it’s “not clear what’s going to be implemented in the end” regarding tariffs. But “there is an issue on business confidence and the business people that I talk to who were almost euphoric in January are now nervous. And they’re nervous about where the macroeconomy is going.”

Atlanta Fed Bostic: Some overshoot in inflation is fine

Atlanta Fed President Raphael Bostic said in an interview that there is “some upward pressure” on inflation. And as “we don’t have the ability to stop trends on a dime. Some overshoot is fine.” Meanwhile, if the current trends continue wages should start to go up as “we will truly have a scarcity of labor”.

Despite a soft batch of Eurozone data ECB Governing Council member Jan Smets remained optimistic. He said in a WSJ interview that “the latest data remain pretty consistent with the story of the economic expansion continuing at a robust pace.”

And the central bank would be ready to phase out the EUR 30b per month asset purchase program later this year. Instead, Smets said ECB would turn the policy focus toward communicating on interest rates.

Reuters reported sources saying the ECB policy would not want to upset market expectations. That is, investors are expecting the asset purchases to end this year and there would be finally a rate hike towards the middle of 2019.

ECB chief economist Peter Praet commented on Eurozone inflation yesterday. He said the negative surprise in core inflation in April was “mainly attributable to a decrease in services inflation, which is likely to be related to developments in volatile items, also reflecting the timing of Easter this year.” Looking ahead, “on the basis of current futures prices for oil, inflation is likely to hover around 1.5 percent in the coming months.” As a recap, released last week, Eurozone CPI flash slowed to 1.2% yoy in April, down from 1.3%. Core CPI was worse, slowed to 0.7% yoy, down from 1.0% yoy.

White House spokesperson Sarah Sanders told reports that trade talks between US and China will resume in Washington next week. She said that “we are working on something that we think will be great for everybody”. And, “China’s top economic adviser, the vice premier (Liu He), will be coming here next week to continue the discussions with the president’s economic team.”

In the bigger picture, for now, price actions from 137.49 are viewed as a corrective pattern only. Hence, while, deeper decline would be seen, strong support is expected at 38.2% retracement of 109.03 to 137.49 at 126.61 to contain downside and bring rebound. Up trend from 109.03 (2016 low) is expected to resume afterwards. Though, sustained break of 126.61 will be an important sign of trend reversal and will turn focus to 124.08 resistance turned support. 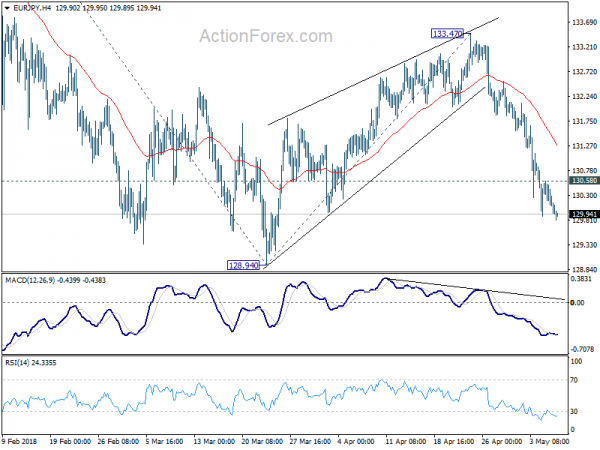 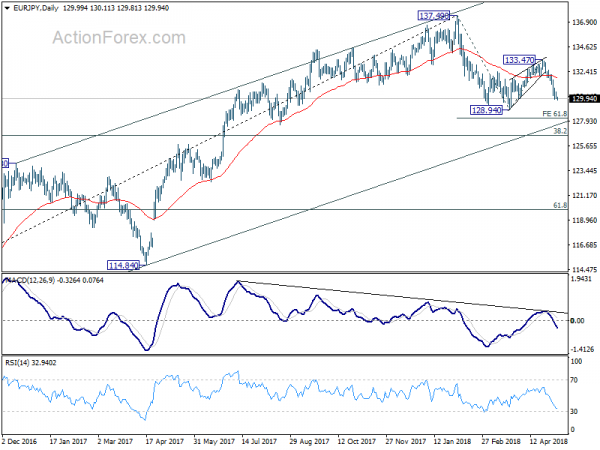