The development in the forex markets are pretty much unchanged. Australian, Canadian and US Dollar remain the strongest ones for the day. On the other hand, Japanese Yen and British Pound have been taking turns to be the weakest. Receding risks of US-China trade war is a key focus in driving risk appetite and hammers the Yen. On the other hand, Sterling is soft as traders turned more cautious ahead of an important week. Brexit negotiations will release in Brussels on Tuesday. April CPI and Q1 UK GDP to be featured this week will possibly decide whether there is still chance for an August BoE hike. Meanwhile, Euro is mixed as the meeting between the new populist Italian government leaders and President Mattarella is awaited.

Sterling is facing and important week ahead. The next Brexit negotiations session will begin in Brussels on Tuesday. The topic of Irish border remains unresolved. There were rumors that UK could stay in the customs union after Brexit but they were quickly denied. Some progress has to be made before another EU summit in June but time is running out.

Further more, whether BoE is ready to raise interest rate in August, November, or no at all remains a key question. That’s a question to BoE policymakers as well as the markets. BoE Governor Mark Carney viewed Q1 slowdown as temporary. And he expected upward revision from the dismal 0.1% qoq growth. We’ll have that revision, if any, on Friday. In addition, there will be inflation report hearing on Tuesday, CPI on Wednesday, and retail sales on Thursday too. We believe that by the end of this week, we’ll see if there is any chance of August hike.

CBI Drechsler: Customs union is a “pragmatic decision” after Brexit

Paul Drechsler, President of the Confederation of British Industry, will use an upcoming speech to urge UK Prime Minister Theresa May to “break the Brexit logjam and fast”. And he added that UK should remain in the customs union with the EU “unless and until an alternative is ready and workable”.

And he emphasized that any solution must meet four customs tests:

Before any solution, he added “a pragmatic decision to be in a customs union with the EU would allow us to move on.”

Leaders of anti-establishment 5-Star Movement and the far-right League will meet with President Sergio Mattarella today at 1530 GMT. If they could clear this last hurdle, the coalition government could be formed quickly. And a confidence votes might be pushed through the parliament as soon as this week.

The latest version of the the coalition’s economy policy excludes the request for a 250B euro debt relief from the ECB while a mechanism under which countries could leave the EU is not proposed. Yet, it indicates that ECB’s purchase of government under the QE program should not count towards the debt-to-GDP ratio. Meanwhile, it calls for a reevaluation of the EU budget and a review of “European economic governance”, which the parties criticizes as based more on the “predominance of the market” than on economic and social needs.

The focus of the plan was on fiscal stimulus. According to former fiscal commissioner and IMF alumnus Cottarelli, the measures might result in a deficit slippage of 108-125B euro (6-7% GDP), in addition to the current 30B euro (1.7% GDP).

China Liu on US trade talk: Increase imports, re-balance the economy and expand domestic demand is our national policy

China’s Vice Premier Liu He was interviewed by the CGTN TV network after the trip to Washington. He noted the trade talks were “constructive, positive and fruitful”, and “very practical”. There were “lots of concrete consensus” reached in terms of trade and structural issues. And, “both sides pledged to stop the trade war and develop good relations.”

The concrete issues include agricultural and energy exports to China. Liu added that “the Chinese market will become the largest world market. So to increase imports, re-balance the economy and expand domestic demand is our national policy.” Also, Liu said “we expand our domestic market and increase imports because we want to serve the needs of our people, our economy, and our growth. Speeding reform and growth by means of opening up is a very important national strategy. It worked for China for the past 40 years, and we will continue down that path.”

But he emphasized that “exporting to China or making China buy more, one must make the Chinese consumers happy”.

RBA chief economist Alan Oster noted that the ” change reflects the fact there is no sign yet of stronger wages growth and unemployment has been stuck around 5.5% for the best part of a year.” Also, he added that once the tightening cycle starts “further rate increases will be very gradual”. And after the first move in May 2019, the next move will be “not until November 2019”.

New Zealand retail sales was a big disappointment to the markets. Ex-inflation retail sales volume grew merely 0.1% qoq in Q1, much lower than expectation of 1.0% qoq. That’s also a sharp slowdown from Q4’s 1.4% qoq. Besides, it’s the weakest quarter since 2015.

Stats NZ noted in the release that “retail spending in the first three months of the year was relatively flat despite rising job numbers, high migration, and record international tourism.”

Intraday bias in GBP/USD remains on the downside as fall from 1.4376 is in progress. Next target will be 50% retracement of 1.1946 to 1.4376 at 1.3161. On the upside, break of 1.3568 resistance is needed to indicate short term bottoming. Otherwise, outlook will remain bearish in case of recovery. 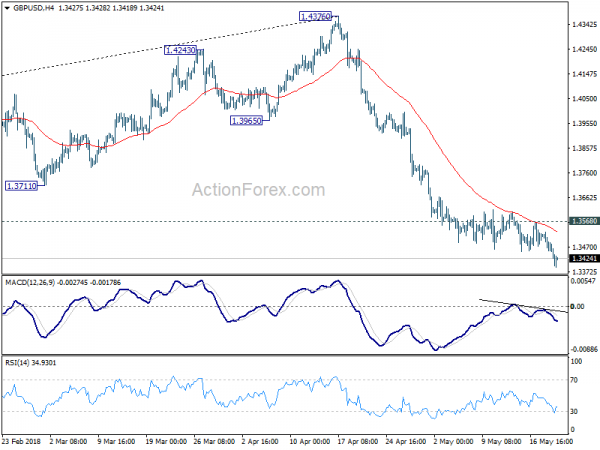 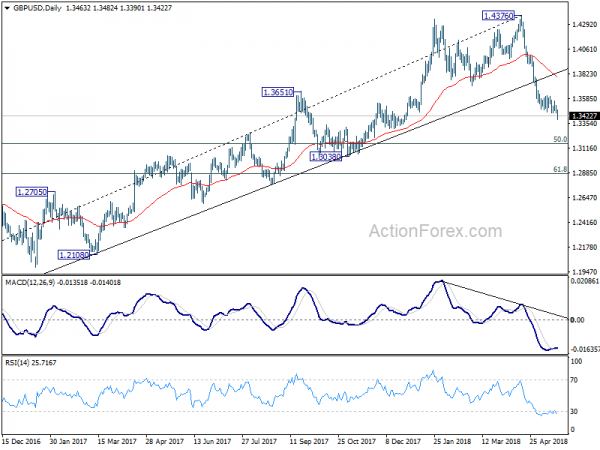