In the currency markets, Yen ended reasonably as the strongest one on risk aversion, in particular consider that Nikkei was the worst performer. Dollar ended as the second strongest. However, the greenback struggled to extend gains against all but Euro and Sterling. Also given the deepened selloff in the US markets, investors have been paring their bets on Fed’s rate path in 2019. The greenback might lost more ground ahead if the coming set of data, ISMs and NFP, disappoints. Canadian Dollar was the third strongest after hawkish BoC rate hike.

Sterling was the weakest one on Brexit impasse and there is still no sign that the withdrawal deal could be done 100%. Further, there is even no sign the extra EU Brexit summit would be held in November. However, Sterling’s outlook is a bit tricky indeed. NIESR forecast a very aggressive BoE rate path in 2019 should a no-deal Brexit occurs. We’ll cover that below. New Zealand Dollar was the second weakest one. Euro was the third as weighed down by Italy-EU budget showdown as well as weak economic data.

Comments by Fed officials were generally hawkish and affirmative to continuing rate hikes till neutral. Even Trump’s new addition, Fed Vice Chair Richard Clarida supports gradual monetary policy accomodation removal. However, investors are starting to think otherwise. December rate hike is still a done deal for now but the picture changed beyond that. For March, fed funds futures are now only pricing in around 44% chance of another hike to 2.50-2.75%. That’s sharply lower than 56% a week ago and was even lower than 49% a month ago. For June, the chance of yet another hike to 2.75-3.00% stands at 26.5%, comparing to 36.3% a week ago and 30.1% a month ago. The change in Fed expectations might limit Dollar’s rally attempt ahead, or even push for a reversal.

S&P 500’s correction from 2940.91 resumed last week and took 55 week EMA decisively. Overall view is unchanged. As a less bearish case, SPX is just correcting the up trend from 1810.10 to 2940.91. Deeper fall would be seen to 38.2% retracement at 2508.94 before completing the correction. If that’s what is going to happen, it will be consistent with another fall in the Dollar index in the near term. And, as sentiments stablized after the correction, as SPX rebounds from 2508.94, Dollar index could have the condition to break through 96.86 key resistance firmly. But of course, we can’t tell for sure how things are going to play out unless we have a crystal ball.

The European Commission formally rejected Italy’s budget last week. The response from Italian government was clear… it’s not going to change anything in the budget. Though, Economy Minister Giovanni Tria was also clear that current German-Italian spread is not sustainable. And in his own words, that’s “not so much for the consequences it would have on debt interest payments”, but “for the impact it would have on the weakest parts of the banking system”. It’s estimated that some small banks will need recapitalization if spread surges to 400 level. And in that case, government intervention might cause even more problems.

In addition to Italy, slowdown in Eurozone is also a factor that’s weighing down the Euro. Eurozone PMI composite dropped notably to 52.7 in October, hitting a 25-month low. MarkitChief Business Economist Chris Williamson noted in the release that “although the survey’s price gauges remain elevated and close to seven-year highs, the headline PMI has fallen to a level that would historically be consistent with a bias towards loosening monetary policy in order to prevent any further deterioration of economic growth.” ECB President Mario Draghi sounded confident in his post meeting press conference last week. But the tone may change if the outlook continue to worsen ahead.

DAX was the worst performing major European index last week, partly because German PMI composite dropped to 41-month low at 52.7 in October. 61.8% retracement of 9214.09 to 13596.89 at 10888.31 is the next line of defense. For now, we’re still adopting the less bearish view that fall from 13596.89 is only correcting the up trend from 9214.09. However, further downside acceleration through 10888.31 will start to shift to the case that it’s correcting an even larger up trend, given that bearish divergence condition also appears in weekly MACD too. In that case, break of 92.14.09 support will become a real possibility. And that could serves as a signal of more troubles in other markets of the world.

At the same time, let’s have a look at BoE’s conditioning path for the Bank Rate it adopted in the August Inflation Report. the Bank Rate would hit 0.9% by the end of 2019 and then 1.1% by the end of 2020. That is, one rate hike or less in 2019 and possibly one or even no hike in 2020. Under both scenarios, NIESR’s Bank Rate projections were much more agressive than BoE’ conditioning path.

BoE will meet this week and no one is expecting any change in the monetary policy. Though, the new quarterly Inflation Report will catch a lot of attention.

On Friday, it looked like our AUD/USD short (sold at 0.7100, last updated here) was finally running well when the pair broke 0.7040 low. But we were then quickly stopped out at breakeven as the pair rebounded strongly before weekly close. We were correct three weeks ago in anticipating selloff in global stock markets, in particular Asia. China’s SSE did break 2638 key support and reached as low as 2449. Naturally, as a risk sensitive currency, we should have seen Aussie tumbled further. 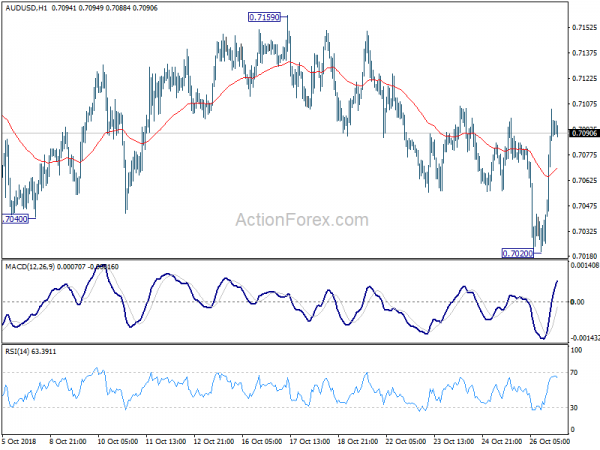 But two things went against our trade. Firstly, the strong rally in iron ore price has been providing strong support to Aussie throughout. Secondly, the tide somewhat turned after Trump’s repeated attack on Fed after stock market crash. As noted above too, investors are starting to pare back bets on Fed’s rate path in 2019. There is still no timing for RBA’s next rate move yet. But monetary policy divergence between Fed and RBA might not happen as quickly as it was anticipated a month ago. Hence, while AUD/USD did extend recent down trend, downside momentum continued to diminish.

As for new strategy, it’s actually a good them to sell Dollar for reversal, as the Dollar index is close to 96.98 key resistance. However, there are a load of important economic data to be released this week, PCE, ISMs and NFP, that could revive Dollar strength. Hence, we’ll keep our hands off for a week first. In particular, we would want to see how the markets react to positive data that would support further Fed rate hikes.

GBP/JPY dropped sharply to as low as 142.76 last week. The development confirmed completion of the rise from 139.88 at 149.77. Initial bias remains on the downside this week for 142.59 support. Break there will bring retest of 139.88 low. On the upside, above 145.03 will turn intraday bias neutral and bring consolidation first, before staging another decline. 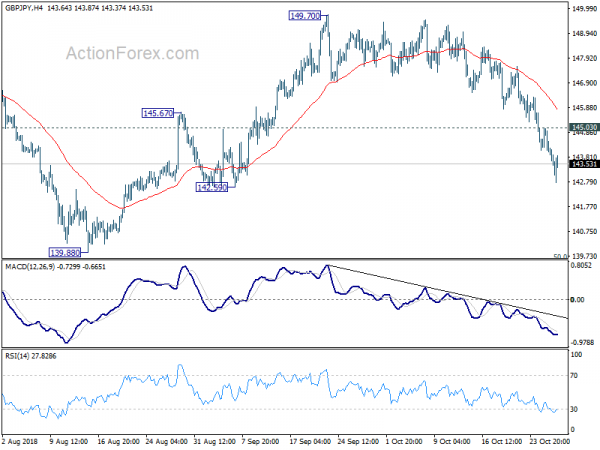 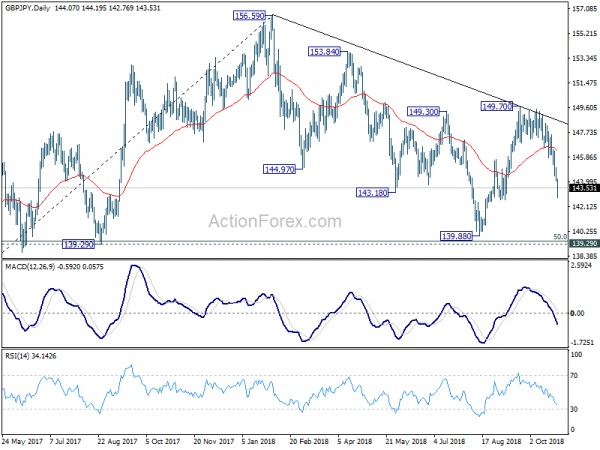 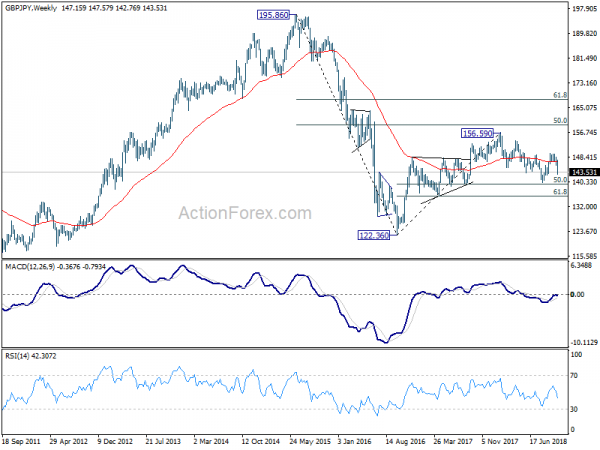 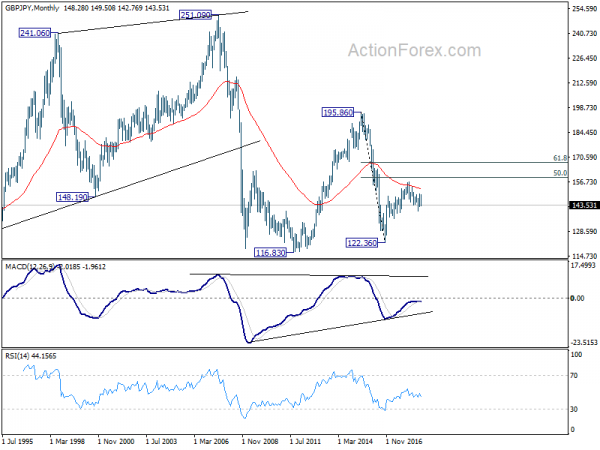