There were so many high profile events last week. In the end, the positive ones were more than enough to offset the negative ones. US-China trade truce was extended indefinitely and it looks closer than ever to have deal. MSCI’s increase of weighting of Chinese stocks gave China another huge boost. Chance of no-deal Brexit faded much with UK Prime Minister Theresa May’s new arrangements. On the other hand, escalation of Pakistan-India tensions and the collapse of Trump-Kim summit in Vietnam just gave the markets very brief impact.

While economic data released during the week were mixed, talks of bottoming in global slowdown emerged, as risks are abating. The turn in sentiment pushed treasury yields sharply higher. Yen suffered broad based selloff as yield gaps widened sharply, with 10-year JGB staying negative. Though, Canadian Dollar took the weakest spot as much weaker than expected Q4 GDP suggested that its economy could be left behind by others. Late selloff in oil prices also did no favor to the Loonie. Sterling ended as the strongest, followed by Euro. But late strength in Dollar suggests that it’s catching up very quickly.

It appeared that sufficient progress were made in US-China trade negotiations to convince Trump to announce extension of trade truce indefinitely early last week. The news set a positive tone for the global financial markets, in particular in China. US Trade Representative is going to publish formal notice in the Federal Register next week, confirming that the rate of additional duty for the products covered by the September 2018 action will remain at 10 percent until further notice.”

Comments from the US official regarding the negotiation were generally positive even though USTR Robert Lighthizer sounded cautious. In his testimony to House Ways and Means Committee, Lighthizer said “real progress” were made and US could “turn the corner” in the economic relationship with China”. But “much still needs to be done” before an agreement is reached, and “more importantly, after it is reached.”

Treasury Secretary Steven Mnuchin, said the team is working on a 150-page, very detailed, document for “significant”, “structural” commitments from China. Mnuchin hoped to “make progress this month”. And, “if we do, there will be a summit of the Presidents”. National Economic Council Director Larry Kudlow hailed that “Lighthizer has worked miracles on this Chinese deal,” and “we’ve never come this far on China trade.”

However, as usual with any deal, it’s agreed only when everything’s agreed. Trump indicated in a tweet on Saturday that he made a sudden request to China to “immediately” remove all tariffs on American agricultural products. He claimed it’s “based on the fact that we are moving along nicely with Trade discussions”, and he didn’t increase the tariffs on March 1.

It’s uncertain what China’s response to Trump’s request would be. From China’s point of view, the logical equivalent response to Trump’s refrain from more tariffs is not to impose retaliation measures of their own. And China has already made some good-faith purchases of US soybeans since the start of trade truce. Chinese leaders could have their own rationales in rejecting Trump’s requests. The negotiation could turn down hill if China does say “no”.

And as a recap, Trump said after the summit with North Korean leader Kim Jong-un collapsed that “I am always prepared to walk,” and “I’m never afraid to walk from a deal, and I would do that with China, too, if it didn’t work out.” He walked away from a deal with Kim after traveling all the way to Vietnam. He can certainly walk away from a deal with China sitting in the Oval Office.

MSCI quadrupoles weighting of Chinese stocks, could translate into billions of inflow

Market sentiments were further lifted, in particular in China again, after MSCI announced to increase the weight of China A shares in MSCI indices. The weighting will be increased from 5%% to 20% in three steps:

After the process completes, there will be 253 large and 168 mid-cap China A shares, including 27 ChiNext shares, in the MSCI Emerging Markets Index, representing a weight of 3.3% in the pro forma index.

The decision was generally seen as symbolic acknowledgement of the growing importance of China’s stock markets. It could trigger increasing interest from US and European financial institutions in China A shares. On the other hand, it’s also an indication that China’s capital market are opening up much faster than anticipated. And foreign investors would pick up a much larger role in the Chinese markets.

Morgan Stanley said up to USD 3B of passive flows would be attracted, on top of USD 15B it highlighted previously. Harvest Global Investments said together with the opening policies, the decision would mean up to USD 100B of foreign inflows to A shares in 2019, more than double of USD 45B in 2018. T. Rowe Price said the decision would translate into USD 40B worth of inflows.

Diminishing chance of no-deal Brexit gave a strong boost to the Pound and also to general market sentiments. At this point, it uncertain how the EU and UK are going to solve the issue of Irish backstop yet. For the Commons to approve it, there must be legally binding that the backstop is temporary. EU is willing to offer further assurances, nothing more. With or without an updated Brexit deal, three votes are scheduled between March 12 and 14.

March 12 – Meaningful vote on a new Brexit deal. Prime Minister Theresa May promised to renegotiate with the EU, especially on the Irish backstop issue. As the EU has so far refused to reopen negotiations, the best PM May could do is to secure some “legal guarantees”.

March 13 – No-deal vote. If the “new” deal is again rejected on March 12, PM May would table a motion, asking if the MPs support to leave the EU without a deal on March 29. This is to get explicit consensus from the parliament as PM May affirmed that the UK “will only leave without a deal … if there is explicit consent in the House for that outcome”.

March 14 – Vote on Extension of Art. 50 (delaying the time to officially leave the EU from Mar 29, 2019). If the above motion is rejected, meaning the parliament rejects a no-deal Brexit with a majority, it would then have to vote on whether to “seek a short, limited extension to Article 50”. If the extension is approved, PM May would have to seek unanimous approval from the EU parliament on the extension.

Even with the arrangement, there is still some uncertainty left. In case of a delay, a short timeframe would unlikely be meaningful for any breakthrough. Some in the EU parliament instead propose a 21-month extension. A longer extension would increase the chance of a second referendum. And, while it is more likely that the majority would vote for an extension if no deal is approved, May has yet to reveal a contingency plan should the extension vote be rejected.

But after all for now, the stage is set that there will only be no-deal Brexit if there is “explicit consent” in the Parliament.

The developments in the financial markets are a result of a combination of all factors in particular the above three. Treasury yields in US, UK and Germany surged sharply over the week. US 10-year yield rose 0.1 to close at 2.755 last week and reclaimed 2.7 handle. Consolidation from 2.799 has likely completed at 2.632. Immediate focus is back on 2.799 resistance this week and break there will confirm this bullish case. More importantly, that would also indicate that medium term correction from 3.248 has completed at 2.554, ahead of 38.2% retracement of 1.336 (2016 low) to 3.248 (2018 high) at 2.517. And there is prospect of retesting 3.248 ahead in this case.

US stocks firm but lacked momentum, Chinese stocks powered up

We have a AUD/JPY short position (sold at 78.40). Our stop at 79.84 was not hit despite a couple of rally attempt in the cross. We were totally wrong on expectation of Yen strength. In particular, the envisaged rejection by 55 day EMA in USD/JPY and EUR/JPY didn’t happen. Instead widening yield spreads pushed both USD/JPY and EUR/JPY sharply higher, taking out key resistance levels. The case for up trend resumption in Yen is no longer there. 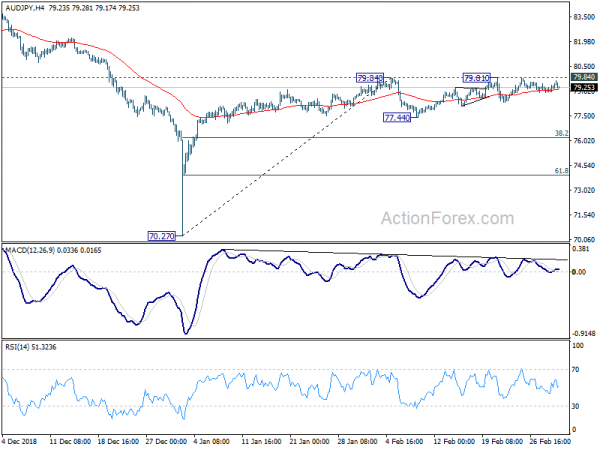 Nevertheless, we were still correct in expectation of Aussie weakness. Such weakness in best seen in the lack of positive reaction to the strong rally in Chinese stocks. And, fundamentally, expectation of RBA rate cut continued to build up. Some further selloff could be seen ahead after RBA rate decision, Australia GDP, trade balance and retail sales this week. 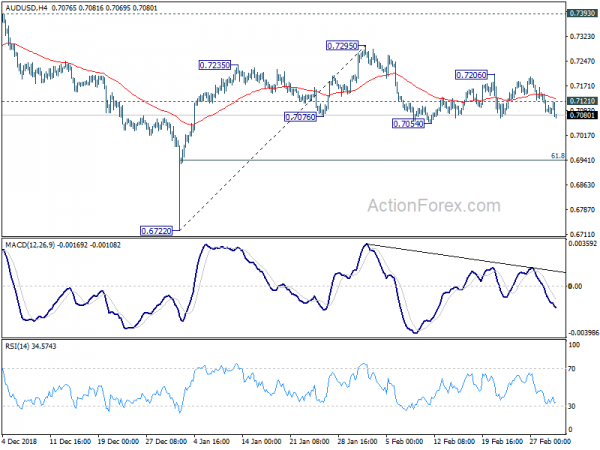 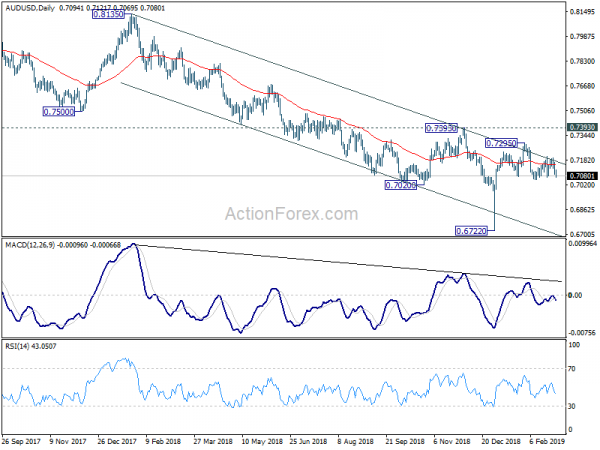 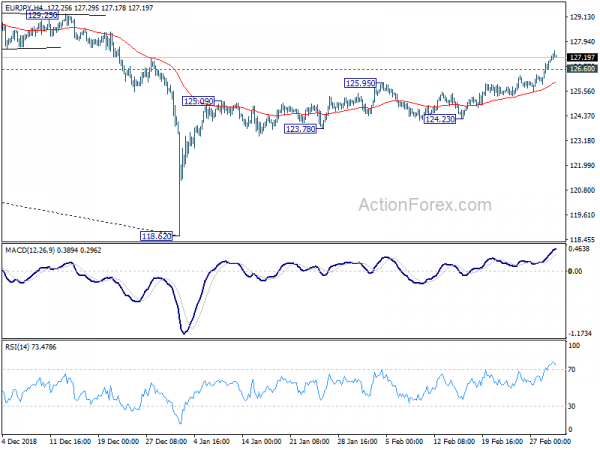 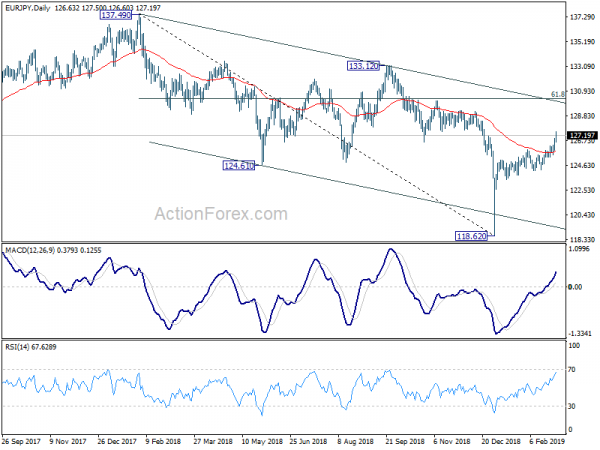 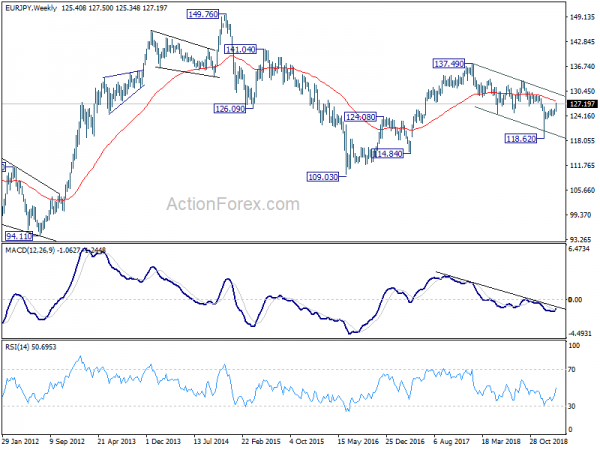 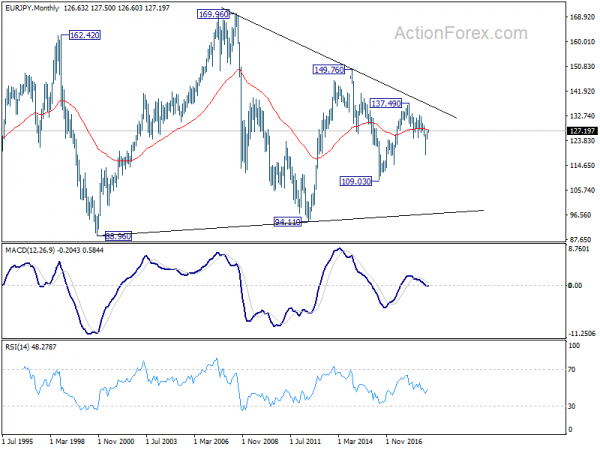